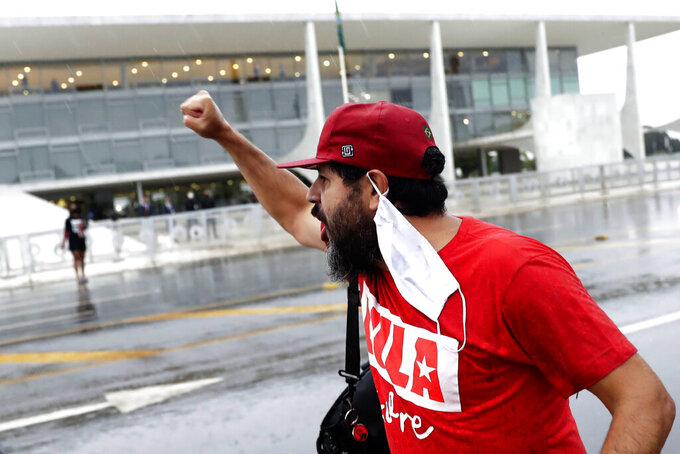 SAO PAULO (AP) — A justice from Brazil’s top court on Monday annulled all convictions against former President Luiz Inácio Lula da Silva, which for now restores his political rights and would potentially allow him to run again for the presidency next year.

The decision also laid bare the country’s political divisions, with leftists celebrating their 75-year-old leader’s return to the political arena as conservatives said the rulings were tantamount to impunity.

Others saw the ruling as an attempt to preserve a vast but embattled corruption investigation that has led to numerous convictions of powerful businessmen and politicians but that has been accused of impropriety.

The decision by Justice Luiz Edson Fachin drew no conclusions about the mammoth “Car Wash” investigation centered on state-run giant Petrobras, from which the da Silva probes emerged. It said, instead, that the federal court in the Southern city of Curitiba, which convicted da Silva twice of corruption and money laundering, didn’t have jurisdiction to put the leftist leader on trial.

Fachin said the cases will be sent to the federal court of Brazil’s Federal District, where they can begin anew.

But Deltan Dallagnol, who prosecuted da Silva as head of the the Car Wash task force, said on Twitter that the ruling may end the case against the former president altogether because the statute of limitations may have run out.

Da Silva’s lawyers issued a statement welcoming the decision, saying it “is aligned with everything we have said for more than five years in these suits.”

But Brazilian media reported that the country's prosecutor-general Augusto Aras, an ally of conservative President Jair Bolsonaro, is preparing to appeal the decision.

Da Silva has been a dominant figure in Brazilian politics for decades, first as firebrand metalworkers’ union organizer who launched failed bids for the presidency, then as the charismatic everyman whose popularity grew on the job as president from 2003 to 2010 thanks to hefty government handouts to the poor and infrastructure investments during the country's commodities boom.

He left office with an approval rating in the mid-80s, and former U.S. President Barack Obama referred to him as the most popular politician on earth. But his star fell in recent years as Brazil's economy slumped and corruption scandals involving the former leader and those around him gained traction.

He was boxed out of the 2018 election by the first of his two criminal convictions.

Maurício Santoro, professor of political science at the University of the State of Rio de Janeiro, said by phone the move will boost da Silva and the Workers’ Party, which has been dented by corruption investigations. However, he questioned whether Lula would gain enough impetus to actually make another run for president, given there are still many who reject him and his party.

“We have seen in recent months Lula’s popularity rising again. That has to do with the pandemic and the humanitarian disaster we’re living through now. When you put all that together, we have a political mood in Brazil right now that is a little more sympathetic than three years ago,” Santoro said by phone. “But I think there is a limit to how far that movement can go.”

People in some cities went to their windows and chanted, “Lula livre!” — “Lula free!” — or blasted jingles from his presidential campaigns. There were also cries of “Bolsonaro Out!” that have appeared at times since the COVID-19 pandemic hit Brazil one year ago.

Da Silva has been sentenced to 12 years and seven months for allegedly receiving an apartment worth about $1 million as a bribe from construction company OAS. Da Silva has always denied ownership of the apartment.

Another conviction involved his alleged ownership of a ranch in Atibaia, outside Sao Paulo.

He was imprisoned in April 2018 while leading polls for the presidential election then just months off.

With da Silva out, conservative lawmaker Bolsonaro won the election handily. Da Silva was released from prison in November 2019 due to a decision of the country’s top court that a person can be imprisoned only after all appeals have been exhausted.

The decision also affects the reputation of former federal Judge Sergio Moro, who sentenced da Silva in the first case, was involved in the second and left his post to become justice minister in Bolsonaro’s administration. He resigned in April last year after falling out with the president.

Da Silva’s legal team had wanted the top court to deem Moro biased after a series of messaging app leaks published by The Intercept Brasil showed apparent coordination between the then-judge and Car Wash prosecutors to land the leftist leader behind bars.

By sidestepping those motions, Fachin’s decision effectively preserves other Car Wash prosecutions, according to Paulo Calmon, a political science professor at the University of Brasilia.

Had the Supreme Court determined Moro was biased, top executives and others he sentenced to prison as part of the investigation could have moved to have their own cases annulled.

“What happened here was a transfer of jurisdiction,” Calmon said.