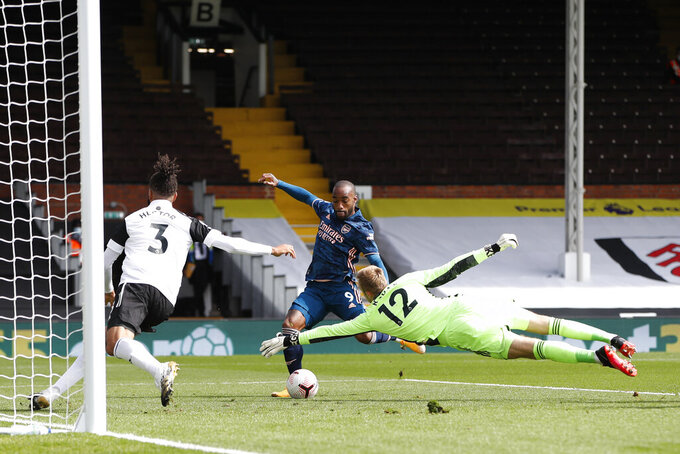 LONDON (AP) — Opening day glory for Arsenal, and with Brazilian duo Willian and Gabriel instantly making a difference on their debuts.

Not every opponent Arsenal faces during the rest of the season will, however, be as easy to roll past as Fulham was on Saturday.

For now, Mikel Arteta will savor opening his first full English Premier League as manager with a 3-0 victory produced by a trio of assists from Willian, including for Gabriel's second-half header.

“I don’t think it gets much better than that," Arteta said. "It’s really good for them, for their confidence, their belief and to settle in the group quickly. That’s always a challenge when you bring in new players, but the way they played today and the commitment they showed with the boys was terrific.”

Willian was back in west London where nearby Chelsea released the 32-year-old winger at the end of last season, which ended only seven weeks ago due to disruption caused by the pandemic.

The free signing took just eight minutes to make an impact with a close-range shot parried by goalkeeper Marek Rodak and tapped in by Alexandre Lacazette.

It was a corner from Willian four minutes into the second half that allowed Gabriel to claim a goal to cap a commanding defensive display.

“Gabriel was solid as a rock," defender Rob Holding said. “He won everything aerially and finished off with a nice goal as well.”

The center back, who joined from Lille for 30 million euros ($35 million), benefited from slack defending himself as he was left unmarked to head into the net.

"He had only trained (for) a few days with the team," Arteta said. "He hasn’t played a competitive match in six months. So obviously there was a risk of injury as well but credit to him, he performed really well, physically he felt good and he was a handful.”

The third goal came from a player Arsenal fans are waiting on confirmation will be staying beyond this season. This was another reminder of the quality of Pierre-Emerick Aubameyang, who faced little resistance after meeting Willian's pass, before cutting in and curling into the top corner.

Willian was selected on the left wing ahead of Nicolas Pepe. The north London club’s record signing a year ago who cost 80 million euros (then $89 million), only came on for the free recruit in the 75th minute.

“For all the players that were today on the bench ... they have to raise the level,” Arteta said.

It was a chastening start to life back in the top flight for Fulham. Just like Craven Cottage — where the stand by the River Thames still is being constructed — manager Scott Parker has a lot of work ahead if the west London club is to survive in the world's richest league.

“When you are a team like us you need to quickly learn and that has been the constant message from me since we have been back,” Parker siad. “This year we are going to lose football matches, but what we can’t afford to do is when you go and lose two or three on the bounce — which is going to happen with us — let it cripple you.

The Premier League started a month later than scheduled due to the pandemic that is still preventing fans from attending games.

Arsenal has already played once this season without fans — winning the Community Shield at Wembley Stadium.

Picking up trophies wasn't the problem in August, with the month starting in FA Cup glory. The challenge is returning to the Premier League's top four to qualify for the Champions League for the first time since the 2016-17 season after finishing eighth last season.

The only blot on the opening day for Arsenal was Eddie Nketiah and Dani Ceballos needing to be separated in the warm-up after clashing.

“I haven’t seen anything, sorry," Arteta said. "I was inside.”

But Ceballos later posted a photo alongside Nketiah on Instagram, saying, “No problems here my brother.”