Brazil's Serie A already in doubt after infected first round 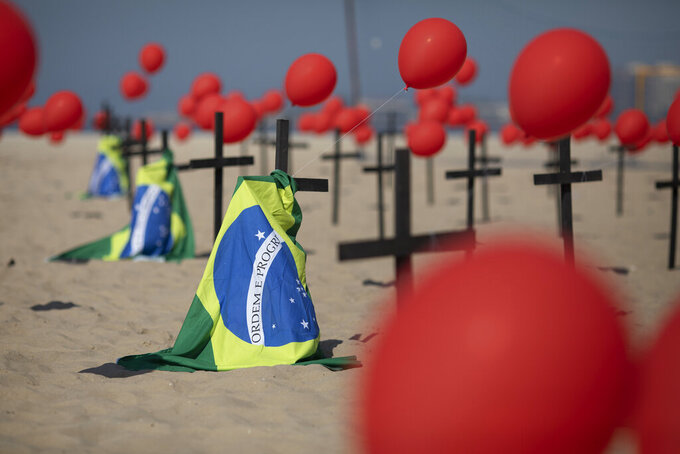 Crosses, red balloons and Brazilian nation flags are placed in the sand on Copacabana beach in a demonstration organized by Rio de Paz to honor the victims of COVID-19, as the country heads to a milestone of 100,000 new coronavirus related deaths, in Rio de Janeiro, Brazil, Saturday, Aug. 8, 2020. (AP Photo/Silvia Izquierdo)

SAO PAULO (AP) — Brazil's championship didn't even complete its opening round over the weekend before its future was cast in doubt when a match was postponed after nine players from the same team tested positive for COVID-19.

Goiás officials said on Monday the team will travel to its second round match against Athletico on Wednesday only if new tests do not rule out more members of its squad.

Striker Rafael Moura said he and eight teammates who have the coronavirus fear they have infected more people.

Goiás expected to receive COVID-19 test results on Saturday, but received them only on Sunday morning with the shocking figures. The club asked Brazil's top sports court to postpone its match against Sao Paulo, and the answer came four minutes before kickoff.

“Our biggest concern is with our family members, with those we had contact before our time together and that were possibly infected,” Moura said. “Unfortunately we are exposed to this invisible virus, it can happen to anyone and maybe one of us gave it to the others between one test and the other. We need to think about the way tests are done or increase the number of tests.”

Goiás received the tests results on such short notice that the team’s third goalkeeper was at lunch with his family when he had to be rushed to the stadium. The team's first two goalies tested positive and will remain in isolation for at least 10 days, abiding by the championship protocols.

Brazil's Serie A began on the weekend while the country is dealing with a virus with grim figures of 100,000 known deaths and three million registered cases. Only the United States has bigger totals in both categories.

One of the few footballers speaking out about Sunday's postponement in Brazil, Sao Paulo defender Dani Alves, said the situation was “unaceptable.”

“Either we raise awareness and be professional or this will be just a waste of time,” Dani Alves said on his social media without clarifying whether his criticism was to players, executives or both.

A third division match was also postponed on Sunday after 12 players of tiny Imperatriz tested positive for COVID-19. They found out only four hours before their match against Treze, in the northeastern state of Paraiba, after travelling by airplane and bus.

The lag in results of tests is also being criticized. Teams have to take them 72 hours before every match, but Albert Einstein Hospital in Sao Paulo — recommended by the national soccer federation — is so late in diagnosing that infected footballers might have played with the virus.

Five players of Serie C team Ypiranga had the virus when they traveled by bus to face Brusque in southern Brazil. Though none of the players who were positive appeared in the match, their teammates did not test again before the match and could have spread the virus.

Serie B team CSA tested for COVID-19 on Wednesday but received its results only hours before Saturday’s clash against Guarani. Eight players were positive and did not play, but their teammates that spent days with them did.

Local giant Corinthians announced it will not send its prematch samples to Albert Einstein due to “failings and inconsistencies.” The club said it will use another clinic to perform the tests, a decision that will be followed by others, according to Brazilian media.

The restart of professional soccer in Brazil amid the pandemic is a victory for President Jair Bolsonaro, who has pushed for a return to normal due to a belief that a collapsing economy will kill more than the virus. Flamengo, the reigning Brazilian and South American champion, also pressured for the championship to get underway, after it was orignially scheduled to start in May.

Paraguay and Uruguay have largely managed to stop the virus, and restart pro soccer. Argentina, which has a much less alarming situation than Brazil's, allowed teams to restart practice only on Monday.