Browns QB Mayfield in 'no rush' with contract extension 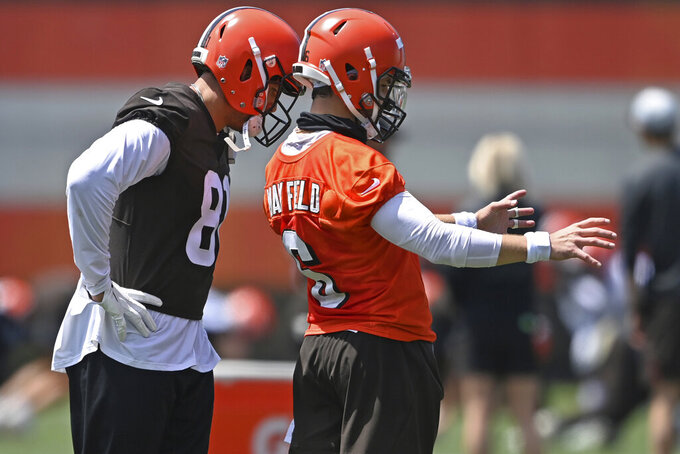 BEREA, Ohio (AP) — Along with everything else, Baker Mayfield is practicing patience this summer.

The Cleveland Browns quarterback, whose strong 2020 season seemingly ended any debate about whether he can lead the franchise over the long term, said Wednesday that he's in no rush to get a contract extension.

Mayfield's fifth-year contract option worth $18.8 million was picked up in April by the Browns, who are now considering whether to lock him up beyond the 2022 season.

The team has several other long-term deals to consider, with star running back Nick Chubb, cornerback Denzel Ward and guard Wyatt Teller all eligible for extensions.

Mayfield bounced back from a shaky second year in the NFL by leading the Browns last season to their first playoff appearance since 2003. He found his groove after Cleveland's bye week and finished with 26 touchdown passes and eight interceptions in the regular season.

In the wild-card game, Mayfield threw three TD passes as the Browns stunned the rival Pittsburgh Steelers for their first playoff win since 1994.

Expectations are even higher in Cleveland this season, and Mayfield said he's not going to allow his future — or the Browns' plans — to become a distraction. He's letting agents Jack and Tom Mills handle his business.

“I don’t try and feed too much into that because that’s wasting my time and energy and thought process on stuff that I’m not in control of right now,” Mayfield said. “So I’m going to handle what I can control.”

The Browns chose Mayfield with the No. 1 overall pick in 2018, and followed the selection by taking Ward at No. 4 and Chubb at 35. Mayfield would love for the trio to stay linked for a long time.

"Obviously those guys are tremendous teammates, all coming in here together around the same time,” Mayfield said. “That’d be very special. But that’s one of those things, I think everything happens for a reason and it will handle itself. Just worried about winning.”

With Ravens star QB Lamar Jackson (MVP in 2019) and Bills Pro Bowl starter Josh Allen also eligible for extensions, it will be interesting to see which team signs its quarterback first and perhaps sets the bar for the others.

Mayfield insists he's not focused on the timing of a possible deal or what Jackson or Allen might get.

“I have bet on myself my whole life,” he said. "I have always taken it one day at a time and one play at a time. I am not going to handle it any differently now.”

For the first time since joining the Browns, Mayfield has continuity.

He's in his second season with coach Kevin Stefanski — his third coach in four seasons — so he's not having to learn a new playbook, and the pair have established a working relationship that's still growing.

Mayfield did not attend the Browns' recent voluntary workouts, choosing to work out on his own with Odell Beckham Jr., Jarvis Landry and others at home in Austin, Texas. But after two minicamp practices, Stefanski has been impressed.

"He’s throwing the ball really well,” Stefanski said after Wednesday's workout. “Anytime for any player when you have comfort in what you’re doing, you can cut it loose, and specifically in Baker’s case, I think that is true.

“Year two in this system for Baker, you hope that there’s a comfort level where his play happens fast, the processing happens fast.”

Mayfield was asked if he was convinced something will be worked out this summer, if an extension is just a matter of time.

“Everything happens for a reason,” he said. "I think the chips will fall where they’re supposed to. I’m concerned about winning and that’s what everybody in this building needs to be concerned about.

“That’s not saying that anybody is not, but the concern right now is winning and building a strong foundation for the season.”

“Since he’s been here, I’ve always thought very highly of him,” Bitonio said. "He’s always been a great teammate to me and what he’s shown on the football field — the positives far outweigh the negatives. I think he’ll just continue to take those steps and continue to improve.

"It’s a big year for us and a big year for him, but I know he’s looking forward to it and that’s kind of what he lives for, those big moments, so we’re getting ready to roll.”

NOTES: Beckham's quick recovery from knee surgery in November has been startling. He did even more during Wednesday's practice, running routes and taking part in 11-on-11 sessions after watching Tuesday. ... Stefanski said more than 51 of the 90 players on the Browns roster have been vaccinated against COVID-19. ... WR Rashard Higgins did not practice with an undisclosed injury, but Stefanski said he'll be fine.