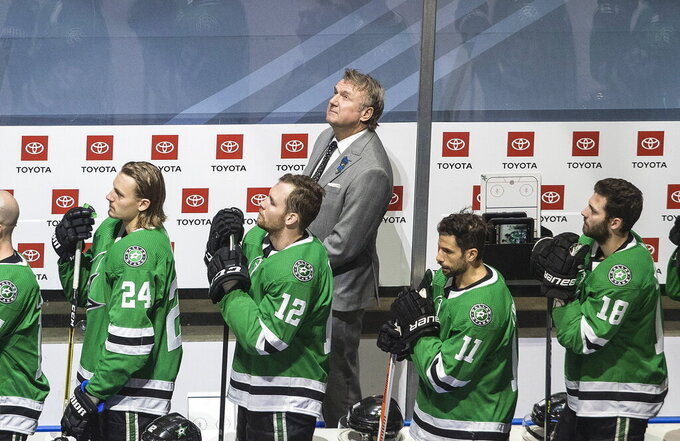 The hotels might be posh, their amenities and service first rate, and yet life inside the NHL’s two playoff bubbles isn’t exactly glamorous.

Having spent nearly a month cooped up at the tunnel-connected hotel-arena complex in Edmonton, Alberta, Rick Bowness acknowledged there’s times he’s had to coax himself to step outside to bask in the sun and breathe in some fresh, nonfiltered air.

“If people think living in a bubble is great, it’s tough. It’s mentally tough. And everyone’s making the best of it,” the Stars interim coach said after Dallas advanced to the second round with Game 6 victory over Calgary last week.

“It’s not your typical playoffs. It’s not, where, OK, you play, you jump in your car and you go home or whatever. It’s none of that. It’s play, go back to your room,” Bowness said, beginning to laugh. “This isn’t as easy as you think it is.”

Bowness emphasized he wasn’t complaining, but simply noting the challenges that come with the NHL’s most unusual playoffs, which haven’t yet reached the halfway mark in a bid to award the Stanley Cup by early October — or sooner.

“Listen,” he said. “Until you live in this, you have no idea what we’re doing, what we’re going through.”

The potential for NHL bubble fatigue is real.

The close confines, daily COVID-19 testing, lack of freedom to venture beyond the security fences surrounding hotels and arenas in Edmonton and Toronto, and the separation from loved ones can weigh heavily on everyone. Teams have access to outdoor stadiums in both cities, and the NHL has arranged golf outings on off days, in which players are bused to and from the facilities with no access to those outside the bubble.

“It’s hard when you’re in that type of environment because it’s almost like you’re in prison,” Blackhawks general manager Stan Bowman said after Chicago was eliminated by Colorado in five games in the first round.

“When the pandemic hit, you could still leave your house, you could walk outside and get some fresh air,” Bowman added. “But here, I think it’s the mental toll that you’re kind of trapped. You can’t go anywhere. And over time, it does start to get to you.”

“It's basically monotonous every day. We had 2 1/2 blocks with nothing to really do other than hockey. This is where mental will comes in,” Tocchet said. “The teams that go far, obviously you got to have the talent. But you also have to have the strong mental fortitude to get through that for sure.”

NHL Deputy Commissioner Bill Daly wrote in an email to The Associated Press that the league is “actively trying to minimize the length” of the playoffs “in part due to the dynamics and constraints of ‘bubble life.’”

That was evident Friday, when the NHL scheduled the second round of the playoffs to open before the first round was complete. And with the conference and Cup finals set for Edmonton, the two East finalists will likely have only two days to acclimate to their new surroundings upon traveling from Toronto.

“We will continue to pursue all ‘move up’ opportunities aggressively as we go forward,” Daly wrote.

He added the NHL is still checking with health authorities on whether family members will be allowed to enter the bubble before or during the conference finals.

In noting the bubble challenges, Boston Bruins forward Brad Marchand said players can also use them as motivation.

“We’re all sacrificing to be here, so I think the drive is there to want to make it all worth it,” Marchand said.

“So when you get on the ice, you want to win, because otherwise this whole thing is for nothing,” he said. “It’ll be worth it if we win. So it’s that fear of losing, I guess, that kind of drains you mentally, and being away from the family.”

Teams arrived at their hub cities on July 26, before playing an exhibition game, followed by a two-part preliminary round. The bottom 16 teams competed in a best-of-five elimination series, while each conference’s top four teams played a round-robin tournament to determine seeding.

The first round began on Aug 11 and lasted just 11 days.

Overall, a combined 43 games were played, which matched the second-lowest total since 41 games were needed to complete the first round in 2000.

Though it’s unclear what those numbers reflect, Bowness said the notable momentum swings within a series or even a game were “absolutely” the result of life in the bubble.

Columbus and Toronto each rallied from three-goal deficits during their preliminary round series. Dallas did the same in a series-deciding 7-3 win over the Flames.

“The way we’re living and playing, that’s going to lead to a lot of emotional swings,” Bowness said. “Give our guys credit, they battled back.”

In a bid to break the monotony, Bowness scheduled a mandatory fun day for the Stars at Edmonton’s Commonwealth Stadium on Friday.

“We need to get out of the hotel. We need a mental break,” he said.

The players repaid Bowness with a 5-3 series-opening win over Colorado a day later. The only drawback was Bowness and his staff couldn’t join them because they had to spend Friday at the hotel prepping for the Avalanche.

“It would’ve been a good day for us to get out with them, but hey, that didn’t happen,” Bowness said. “And we knew when we came into this bubble, you roll with the punches.”