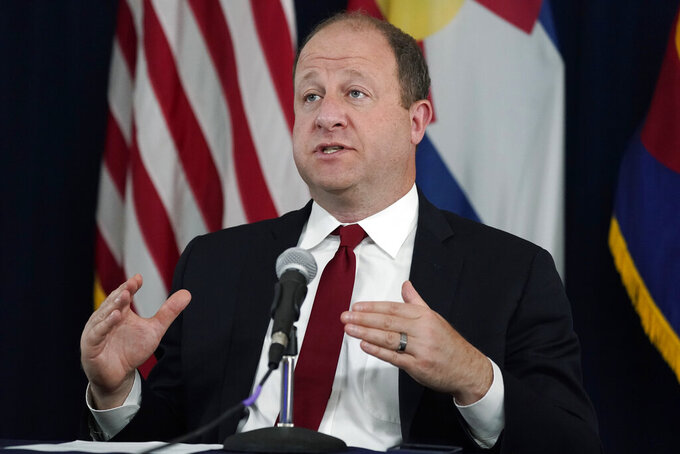 Colorado Governor Jared Polis makes a point during a news conference on the state's response to the spread of the coronavirus Thursday, May 20, 2021, in Denver. (AP Photo/David Zalubowski)

Gov. Jared Polis, majority Democrat legislative leaders and the four Democratic members of Colorado’s congressional delegation gave an overview of the plans at a Capitol news conference. Polis and others emphasized the outline came after virtual and in-person meetings with Coloradans across the state in recent months.

Polis said roughly $1.3 billion will be used to shore up current and future state and local spending; another third will go to workforce development, affordable housing and mental and behavioral health; and a similar amount will support transportation and rural development and agriculture spending.

Some of the state budget support will be unveiled in legislation currently being drafted for consideration this legislative session, said Sen. Dominick Moreno, chair of the Joint Budget Committee. A bipartisan legislative task force will study how to invest the coming pandemic relief funds in housing, behavioral health and job creation over the summer, said House Speaker Alec Garnett.

At least $750 million will be set aside for future economic stimulus spending once lawmakers determine gaps in aid and reconvene in 2022, Senate President Leroy Garcia said. Possible targets include unemployment insurance trust funds, targeted rural aid, and investment in solar energy and broadband, he said.

The American Rescue Plan, a $1.9 trillion pandemic relief law signed by President Joe Biden earlier this year, contains $350 billion of flexible aid for state and local governments, plus billions of dollars more for specific programs such as housing assistance. States have broad leeway to use the money to plug budget holes, invest in infrastructure or address negative economic impacts of the pandemic. It comes on top of $150 billion the federal government sent to states and local governments last year.

States are expected to receive an initial installment soon, with a second round coming a year later.

Like her counterparts, House Majority Leader Daneya Esgar declared the relief aid is a once-in-a-generation chance to promote an “equitable recovery where all Coloradans — all Coloradans — have an opportunity to succeed.” Lawmakers this year have been able to restore $3 billion cut from state spending last year as the pandemic hit, she said.

But Esgar and Senate Majority Leader Steve Fenberg said far more needs to be done, especially in getting Coloradans back to work and investing in affordable housing and other housing-related aid at a time when home and rental prices are skyrocketing, job losses have countless families a step away from eviction and homelessness is widespread.

Fenberg said the task force will study ideas such as buying or building affordable housing; down payment aid for first-time homebuyers; lock in properties, along with local governments, to ensure future affordable housing development; and short-term aid for those who've lost their homes.

Monday's outlines follow an $800 million state stimulus package, pieces of which are still moving through the Legislature.