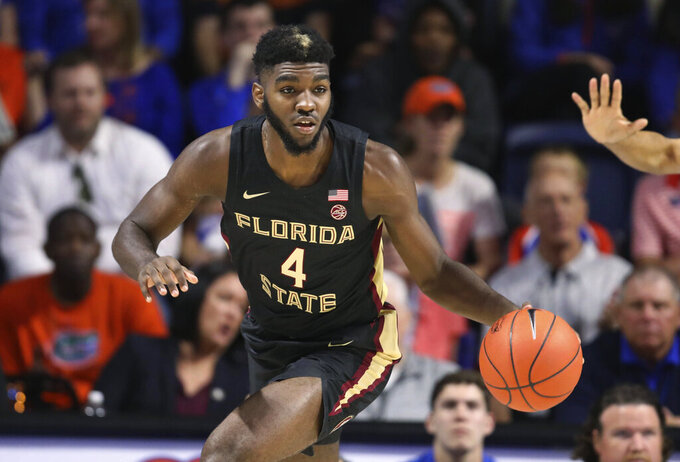 FILE - In this Nov. 10, 2019, file photo, Florida State forward Patrick Williams brings the ball up during the first half of the team's NCAA college basketball game against Florida in Gainesville, Fla. Williams was selected by the Chicago Bull in the NBA draft Wednesday, Nov. 18. (AP Photo/Matt Stamey)

CHICAGO (AP) — Arturas Karnisovas understood how important it was to set the tone by getting his first draft pick for the Chicago Bulls right as he tries to set them on a championship course.

He also hopes they're never in this position again.

The Bulls drafted versatile Florida State forward Patrick Williams with the No. 4 pick on Wednesday night, the next step for a rebuilding team with a new front office.

“This was the opportunity to get it right because the projection of players picked in the top five is much higher,” said Karnisovas, who was hired in April to lead the Bulls' basketball operation. “It drops significantly afterwards. We wanted to get it right and Patrick was our guy.”

The 19-year-old Williams was the Atlantic Coast Conference’s sixth man of the year and helped the Seminoles win their first ACC regular-season crown. At 6-foot-8 and with a nearly 7-foot wingspan, he can defend all five positions.

Karnisovas said he is also an underrated ball-handler and the idea that he is a raw player is incorrect.

Williams averaged 9.2 points and 4.0 rebounds in just 22.6 minutes per game. He also shot 83.8% from the foul line and had a team-high 30 blocks. But he will need to develop more of a touch from the perimeter. Williams shot 32% on 3-pointers and made just 16 from beyond the arc.

He will also need to show he can be more than a complementary player and carry a heavier load than he did in college. He logged more than 30 minutes just twice.

“It's all about roles,” Williams said. “In the NBA, everybody can't be a LeBron James from the Day 1 or a Michael Jordan from Day 1. You've got to kind of embrace your role and then do your role well, and then you're trusted with more."

The Bulls took center Marko Simonovic in the second round at No. 44 overall. The 6-11, 215-pounder from Montenegro who can run and shoot from the outside will be stashed in Europe for at least a year.

It was Chicago's first draft not overseen by Jerry Krause or John Paxson since 1984. Back then, Rod Thorn used the No. 3 pick to take a certain high-flying icon out of North Carolina.

Williams joins a team that finished 22-43 last season and was one of eight not to qualify for the NBA’s restart in Florida. The Bulls were 11th in the Eastern Conference when play was stopped because of the COVID-19 pandemic in March, and they decided needed new leadership.

The 49-year-old Karnisovas starred at Seton Hall and had a successful international career that included two Olympic bronze medals playing for Lithuania. He worked in basketball operations for the NBA from 2003-08 and spent five years as an international scout for the Houston Rockets before joining Denver’s front office in 2013. He became the Nuggets’ general manager four years later, where he helped load up Denver with stars like Nikola Jokic, Jamal Murray and Michael Porter Jr.

Chicago hired Karnisovas as executive vice president of basketball operations in April while shifting Paxson to an advisory role. The Bulls also fired Gar Forman and brought in general manager Marc Eversley from Philadelphia to replace him. And they didn't stop there.

They let former coach Jim Boylen go in August and hired Billy Donovan a month later. The 55-year-old Donovan led Oklahoma City to a 243-157 record and playoff appearances in each of his five seasons. But with an expiring contract, he and the Thunder split in what the team said was a mutual decision.

Williams said the Bulls are “trending in the right direction," with players like Zach LaVine, Lauri Markkanen and Coby White — the point guard drafted with the No. 7 pick a year ago.

He and White know each other well, having grown up in North Carolina. They played against each other during summers, and Williams sought his input leading up to the draft.

“I was already close with him, so I just kind of leaned on him for questions or advice or anything, really, I needed for the pre-draft process," Williams said. “It's actually kinda crazy that I get drafted by the Bulls.”