Bulls not ready to announce decision on Boylen's future 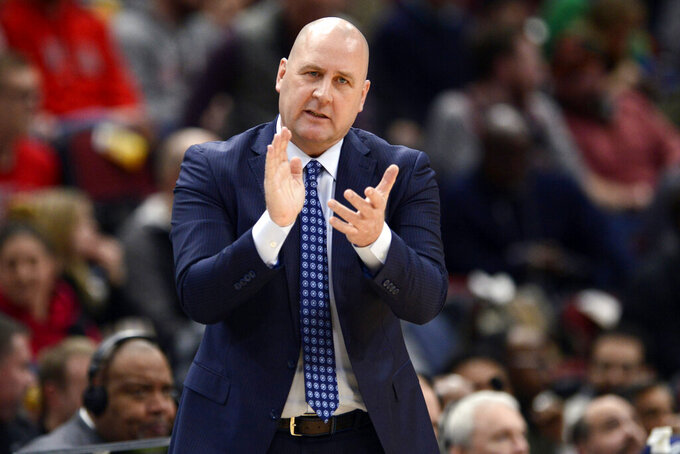 FILE - In this March 10, 2020, file photo, Chicago Bulls coach Jim Boylen cheers on players during the first half of the team's NBA basketball game against the Cleveland Cavaliers in Chicago. Boylen's future is the biggest issue hanging over the Bulls, who were left out when the NBA’s Board of Governors approved a 22-team format to restart the pandemic-interrupted season next month in Orlando. (AP Photo/Paul Beaty, File)

Arturas Karnisovas still has not met in person with head coach Jim Boylen. And that's something he would like to do before going public with any decisions.

Boylen's future is the biggest issue hanging over the Bulls, who were left out when the NBA’s Board of Governors approved a 22-team format to restart the pandemic-interrupted season next month in Orlando. Chicago has missed the playoffs in four of the past five seasons, a tough stretch for a franchise whose dominance in the 1990s was chronicled in the ESPN documentary “The Last Dance.”

The Bulls overhauled their front office when they hired Karnisovas as executive vice president of basketball operations in April and Marc Eversley as general manager a few weeks later.

Boylen remains on the job. But for how much longer?

“I haven't met face to face yet,” Karnisovas said during a conference call. “There haven't been any practices. There haven't been any games since I became a part of this organization. I really take pride in my relationships that I cultivate with coaching staffs, my basketball operations staffs. I haven't seen them. I'm looking forward to it."

The Bulls came into the season hoping to contend for a playoff spot in the Eastern Conference. But the plan did not come to fruition.

Chicago was 22-43 before play was stopped in March and quite a bit has changed since the team walked off the court for the final time. John Paxson, a link to the franchise's glory years, moved into an advisory role after leading basketball operations for 17 years, and Gar Forman was fired as general manager.

Karnisovas is in charge and says he's on his way to Chicago, though he wouldn't say when he expects to arrive. Eversely is not in town yet, either.

But they're starting to lay the groundwork, hoping to lift a struggling franchise.

At 39-84 in just under two years and with a new management team in place, he appears to be on borrowed time. The only Bulls coach with a worse record than Boylen is Tim Floyd (49-190).

But if a change is coming, don't expect an announcement soon. With potential replacements possibly tied up until October — when the delayed 2019-20 season concludes — the Bulls have time.

"I know that you are anxious for me to comment definitively on our future of the Chicago Bulls," Karnisovas said. “I understand that anticipation. That said, I take pride in being deliberate and thoughtful in my decision-making and take the weight of my decisions seriously. I’m not inclined to make evaluations prematurely to satisfy our excitement to move this team forward.”

Karnisovas said the Bulls lobbied the league to be included among the teams that resume the season.

He hopes the eight teams not going to Orlando will be allowed to practice and scrimmage during this extended offseason. After all, they will likely go about nine months between meaningful games with new season expected to start in December.

No matter who is coaching, the Bulls need to get more out of Lauri Markkanen. The 7-footer from Finland averaged 14.7 points and 6.3 rebounds, down from 18.7 and 9.0 the previous season.

“I spoke to him about last year," Karnisovas said. “He’s eager to get back to the gym and improve. He was disappointed, obviously, by the overall result. Every player wants to win. He’s about winning, as well. Our objective is to get the best version of Lauri next year.”

Karnisovas said he doesn't anticipate any more changes to the front office.

The Bulls are slotted for the seventh overall selection in the draft. Unless they move in the lottery, it will be the fourth year in a row they wind up with that pick.

Chicago acquired the rights to Markkanen in that spot from Minnesota in 2017. The Bulls took Wendell Carter Jr. and Coby White at No. 7 the next two years.