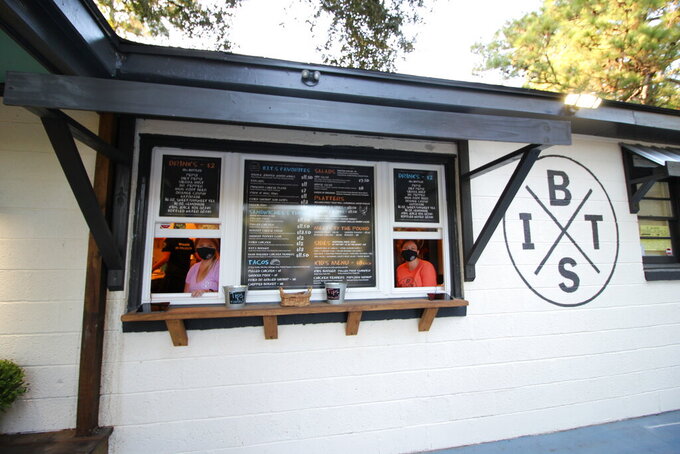 This photo provided by Hannah Albert on Sept. 23, 2020 shows workers at Braised in the South, a Johns Island, S.C., restaurant and food truck business that is having trouble finding workers during the pandemic. Many small businesses find hiring more difficult because many would-be staffers fear contracting COVID-19 on the job or would prefer to live off unemployment benefits. (Hannah Albert via AP)

NEW YORK (AP) — It looks like something to celebrate: small businesses posting “Help Wanted” signs as the economy edges toward normalcy. Instead, businesses are having trouble filling the jobs, which in turn hurts their ability to keep up with demand for their products or services.

Owners say that some would-be workers are worried about catching COVID-19 or prefer to live off unemployment benefits that are significantly higher amid the pandemic. Child care is another issue — parents aren't able to work when they need to tend to or home-school their children. For some people, a combination of factors go into their decision not to seek work.

When Steve Klatt and Brandon Lapp set up interviews for their restaurant and food truck business, they’re lucky if one out of 10 or 15 applicants comes in.

“The people who do show up, all assume their unemployment is running out,” says Klatt, whose business, Braised in the South, is located in Johns Island, South Carolina. The maximum weekly unemployment benefits in the state are $626 including $300 in federal coronavirus relief payments; in some states, maximum unemployment is over $700 a week.

Klatt and Lapp need 20 people to run the business well but have only five staffers. Former chefs, the owners and their wives are working in the kitchen and on the truck to keep things running. Klatt and Lapp recently decided to curtail their Sunday hours and close Mondays to give everyone a break.

“The hit to the bottom line will be noticeable, but it’s not worth burning out the few awesome people we do have working for us,” Klatt says.

Businesses of all sizes are struggling with hiring even with millions of Americans unemployed and as increasing numbers of people get vaccinated and look forward to a more normal life. A Census survey taken in late March shows that 6.3 million didn't seek work because they had to care for a child, and 4.1 million said they feared contracting or spreading the virus.

But smaller companies that often can’t offer pay and benefits as generous as larger companies have a tougher time.

“A shortage of talent is nothing new for small businesses, but the circumstances surrounding this shortage are entirely different,” says Jill Chapman, a consultant with Insperity, a human resources provider.

The National Federation of Independent Business found in a March survey of its own members that 42% had job openings they couldn’t fill. Owners cited higher unemployment benefits as one factor. And a study released last month by the National Bureau of Economic Research found that a 10% increase in unemployment benefits during the pandemic led to a 3.6% drop in job applications.

“Unemployment benefits allow workers to be able to wait longer before they take a job, which can make hiring harder,” said Ioana Marinescu, a University of Pennsylvania professor who co-authored the study.

Companies whose work is done inside homes — including plumbers, contractors and pest control businesses — find many prospective hires are afraid of contracting the virus on a job. Meanwhile, demand for their services is up because there’s more wear and tear on houses and apartments as people spend more time at home.

At Jake Romano’s Ottawa, Ontario, plumbing business, job candidates are gravitating toward commercial plumbing rather than having to visit five to 10 homes a day. Even when Romano finds a good prospect for his company, John the Plumber, he’s often disappointed.

“We had a really good applicant, who I found on Facebook. He agreed to come onboard, everything was looking good. I was excited, he was excited. Then, bam! He changed his mind,” says Romano, who’s looking for two licensed plumbers to add to his current staff of 10.

“Until the schools are reopened and avenues of child care normalized, small firms in general, as well as food, beverage, leisure and hospitality, in particular, are going to face staffing challenges until later this fall at the earliest,” says Brusuelas, chief economist with the consulting firm RSM.

Jillian Melton was laid off from a Seasons 52 restaurant in Memphis, Tennessee, last spring when the pandemic shut the restaurant down. Melton, who had worked at the restaurant for seven years, can’t work a regular schedule; she has three children at home from school and she’s caring for her 93-year-old grandmother. Babysitters and nurses are in short supply.

Melton says employers need to understand that many workers have compromised immune systems or limited availability because schools and day care centers are closed. Some people, upended by the pandemic, are just looking for new lines of work, she says.

Child care is one reason why the pool of available workers has shrunk dramatically at Let Mommy Sleep, which hires nurses and health aides to provide in-home care for babies and give new mothers a respite. Founder Denise Stern says some of her caregivers want to work overnight and sleep during the day, but if they have their own children to care for, that's not possible.

Stern also is being hamstrung by concerns about the virus.

“We can’t hire candidates with second jobs where exposure might happen, and honestly, a lot of candidates don’t want to work in a closed environment where we know transmission happens,” Stern says.

Stern has had to turn business away, and so have the owners of seven Let Mommy Sleep franchises around the country. Stern, who works in the Washington, D.C., area, says her revenue is down by half.

Revenue is down 30% at Filter King, based in Miami. Demand for air filters is jumping as people work from home and run their air conditioners more, but owners Mike Jacob and Rick Hoskins need to double their staff of 20 to keep up with orders.

“The unemployment benefits continue and it’s hard to get people off the couch and into the warehouse,” Jacob says.

But even when people are willing to work, Filter King is at a disadvantage compared to companies that can pay more, Jacob says. He’s lost staffers and candidates to a competitor funded by a venture capital firm.

Stonehedge Farms, a popcorn manufacturer in Dover, Pennsylvania, raised its hourly pay to $13.50 from $12 in hopes of attracting more workers but co-owners Shannon and Anthony Tsonis haven’t been able to find enough people to fill the factory’s two shifts. They have 30 staffers and need another 10; the Tsonises and their office staffers have to fill in at the factory.

Before the pandemic Tsonis could rely on one of three applicants showing for interviews. Now, it’s more likely to be one in 10.

Seven Sisters Scones, a bakery and cafe in Johns Creek, Georgia, has struggled to find staffers not only because of unemployment benefits, but because parents need to be home with their children, co-owner Hala Haider says. The shop has 15 staffers and needs four more.

Because of the shortfall, Seven Sisters Scones can’t make deliveries and they’ll be selling at fewer farmers’ markets than usual this summer. And Haider and her co-owner, her sister Farrah, have had to turn down some new business. But they draw the line at scaling back their online business, which allows them to reach customers across the country.

“That is one thing we don’t compromise on — it’s a priority,” Hala Haider says.