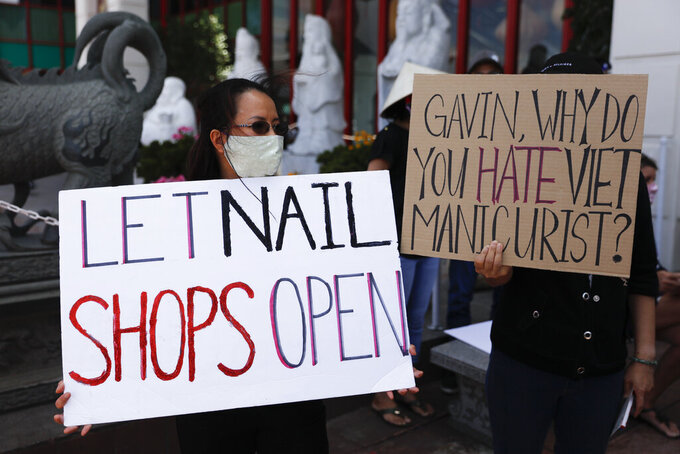 FILE - In this June 8, 2020, file photo nail salon workers hold signs during a protest in Westminster, Calif., to demand California Gov. Gavin Newsom to lift COVID-19 restrictions on nail salons. The services can reopen starting June 19, in counties where health officials allow it. They join a long list of other businesses cleared to reopen in recent weeks, including hair salons, churches and restaurants. (AP Photo/Jae C. Hong, File)

SACRAMENTO, Calif. (AP) — Some Californians will again be able to get a manicure, a new tattoo or enjoy a massage starting late next week under new state guidance issued Friday.

But studios and salons won’t look the same when they do open. Workers and customers must wear face masks, adopt far more intense cleaning practices for shared reusable items like tweezers, and the services will be limited — no mouth or nose tattoos or piercings for now.

The guidance on nail salons has been highly anticipated. The Professional Beauty Federation of California sued the state in May to reopen hair and nail salons. Hair salons were cleared to reopen several weeks ago.

Gov. Gavin Newsom also sparked anger among some in the industry, including Vietnamese salon owners who own a majority of California's salons, when he alleged California's first case of the virus spreading in the community was linked to a nail salon. He declined to give details, citing privacy.

The services can reopen starting June 19 in counties where health officials allow it. They join a long list of other businesses cleared to reopen in recent weeks, including hair salons, restaurants, churches and movie theaters. Most counties have been cleared to move forward, though infection rates and hospitalizations are climbing in some. The state is monitoring infection rates and hospitalizations in 11 counties.

Mark Ghaly, head of California's health and human services agency, said Friday that positive test rates and hospitalizations are remaining stable statewide and the state has hospital capacity for a surge as it moves ahead with reopening.

Beyond masks, nail salon workers should consider wearing face shields or goggles to protect their eyes and wear a new pair of disposable gloves for each customer. Salons should even consider putting plastic partitions with cutouts for hands between workers and customers.

Salons should also no longer display nail polish bottles on a shelf and instead ask customers to choose a color from a palette that can be disinfected. Technicians should throw away nail files, buffers and other items after each use.

Fred Jones, public policy director and legal counsel for the beauty federation, said he was pleased Newsom cleared the reopening but disappointed it took so long. He said he's concerned some counties will delay.

“They have patiently waited and sacrificed their own financial well-being to protect the public’s health. However, they can no longer stand aside when casinos, fitness facilities, and movie theaters begin to reopen," the letter said.

Jaime Schrabeck, a licensed manicurist and owner of Precision Nails in Carmel, said she's pleased to see the state stepping up cleaning protocols but wants more clarity about which parts of the guidance are required, not just suggested. She was not among those advocating for a faster reopening, saying it made sense that services like nail salons and massages were opening later than hair salons because they involve skin-to-skin contact.

“This is definitely a health crisis, not a beauty crisis,” she said.

She suggested salons start collecting the names and phone numbers for everyone they see to assist officials in tracing their contacts if a customer tests positive for the virus.

Other services cleared to open include facials, electrolysis, waxing and massage therapy. All surfaces used by customers should be cleaned with hospital-grade disinfectants.