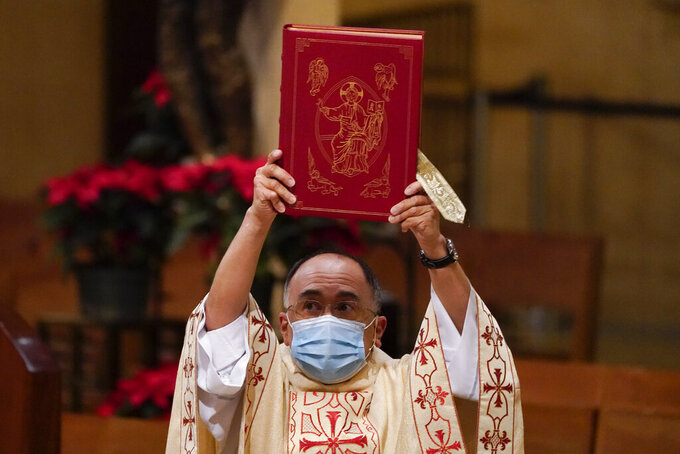 Father David Gallardo leads Christmas Eve Mass at Cathedral of Our Lady of the Angels, Thursday, Dec 24, 2020, in Los Angeles. California became the first state to record 2 million confirmed coronavirus cases, reaching the milestone on Christmas Eve as nearly the entire state was under a strict stay-at-home order and hospitals were flooded with the largest crush of cases since the pandemic began. (AP Photo/Ashley Landis)

Gov. Gavin Newsom warned that hospitalizations could soon double if people don't change their behavior for the holidays.

A tally by Johns Hopkins University showed the nation’s most populous state has recorded 2,010,157 infections since January. At least 23,635 people have died from the virus.

The California Department of Public Health separately tallied 2,003,146 cases and a one-day bump of 39,070 infections that was down from the one-day peak of nearly 54,000 cases at mid-month. The state's death toll climbed by 351, also down from the record high set last week. Another 427 people were hospitalized, raising the total to 18,875. The 3,962 in intensive care units was a record high, as is the number of those hospitalized.

“We’re projecting that our hospital number will double in just the next 30 days, and our projections have gotten much more solid," Newsom said in a video posted on his social media pages from his home, where he remains in quarantine for the second time after a potential exposure. "I fear that, but we’re not victims to that if we change our behaviors.”

California’s infection rate — in terms of the number of cases per 100,000 people — is lower than the U.S. average. But its nearly 40 million residents mean the outbreak outpaces other states in sheer numbers.

The crisis is straining the state's medical system well beyond its normal capacity, prompting hospitals to treat patients in tents, offices and auditoriums.

"They’re suffocating to the point that they can no longer breathe on their own, and they have to have someone put a tube down their throat, in order to oxygenate their organs. Many of these people will not live to be in 2021,” she said.

The county on Thursday reported new records for deaths — 148 in a single day — and hospitalizations, at nearly 6,500 people, 20% of whom were in ICU.

“Our systems are being overwhelmed, and the virus is spreading everywhere,” a coalition of 10 neighboring Southern California local health departments said in what they termed an urgent holiday message. “We cannot continue on our current path without facing serious consequences.”

Los Angeles' Cathedral of Our Lady of the Angels planned indoor Christmas Eve and Christmas Day Masses, with Archbishop José Gomez set to lead two of the four services despite advising in a letter to priests and pastors Wednesday that it is safer to keep celebrating Masses outdoors.

Dozens of physically spaced worshippers removed their masks only to take communion at arms’ length from clergymen, and there was none of the singing that health officials warned could increase the spread.

Father David Gallardo held a copy of the children’s book “How the Grinch Stole Christmas” in a midafternoon service as he taught that “darkness doesn’t win,” likening the coronavirus to the Grinch.

Los Angeles County health officials said flatly in a statement that “attending an indoor service will result in transmission of COVID-19 ... that the healthcare system cannot handle at this time.”

It was among new warnings that the state's medical system will be overwhelmed and unable to provide proper care if people don't avoid gathering for the holidays or at least take precautions like meeting outside in masks at a safe distance or opening windows and turning on fans if they meet indoors.

California Hospital Association president and CEO Carmela Coyle said the 2 million tally "means that thousands of Californians will spend this holiday season in a hospital. On Christmas Eve, Californians can still make a choice to avoid unnecessary travel and gatherings on Christmas Day.”

In a rare ray of hope, a statistical model that state officials have been using to project hospitalizations predicts more than 71,000 patients in one month's time — still an unsustainable four times the current number of patients but roughly 40,000 fewer than the same model had been projecting just days ago.

The transmission rate — the number of people that one infected person will in turn infect — has been slowing for nearly two weeks, and it is nearing the point that would bring fewer infections from each person who contracts the virus.

In addition, the rate of positive cases reached a new high of 12.4% over a two-week period, but it was starting to trend downward over the last seven days from a peak of 13.3% to 12.6%. The seven day rate was 12.1% on Thursday.

“Some encouraging signs, in terms of it seems some stabilization in the rate of growth," Newsom said Thursday. But he said that is counterbalanced by the soaring cases and deaths.

Newsom on Wednesday credited stay-home orders for nearly the entire state that imposed an overnight curfew, shuttered many businesses and restricted most retail to 20% capacity. Restaurants may only serve takeout.

Pleas to avoid social gatherings for the Christmas and New Year's holidays rang with special desperation in Southern California. Los Angeles County is leading the surge, accounting for one-third of the state's COVID-19 cases and nearly 40% of deaths.

Los Angeles Mayor Eric Garcetti called Wednesday "maybe the darkest day in our city’s history,” as the county reported its highest single-day death toll and hospitalizations — 145 deaths and more than 6,000 people in hospitals. More than 9,000 people have died from the coronavirus in the county.

If LA County continues to see the same growth in COVID-19 infections in the next two weeks, hospitals may find themselves having to ration care because of a lack of medical staff, Garcetti said.

“That means the doctors will be forced to determine who lives and who dies,” he said.