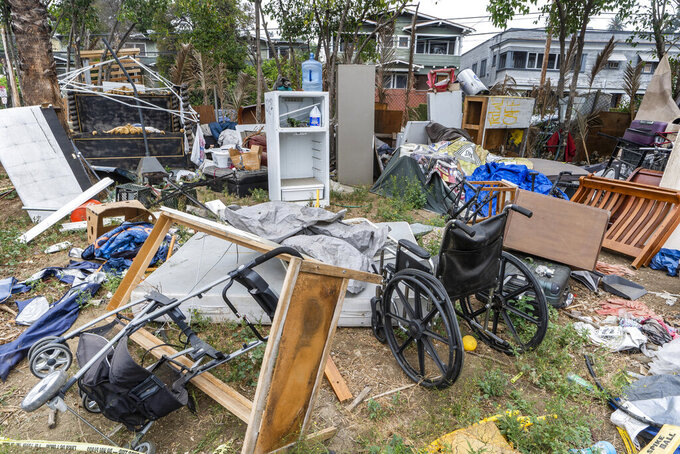 A trashed wheel chair is seen on a homeless encampment on the side of the CA-101 highway in Echo Park neighborhood in Los Angeles Tuesday, May 11, 2021. California Gov. Gavin Newsom on Tuesday proposed $12 billion in new funding to get more people experiencing homelessness in the state into housing and to “functionally end family homelessness” within five years. (AP Photo/Damian Dovarganes)

SAN DIEGO (AP) — Buoyed by a large budget surplus and swimming in federal pandemic recovery money, California Gov. Gavin Newsom on Tuesday proposed $12 billion to get more people experiencing homelessness off the streets and into homes of their own.

Newsom’s proposal includes $8.75 billion over two years to create an estimated 46,000 housing units, expanding on a program he launched last year to convert motels and other properties into housing. Nearly half the money would go toward housing in places where people with mental health and other behavioral issues can get services onsite.

Newsom also proposed spending $3.5 billion on rental subsidies, new housing and shelter resources with the aim of ending family homelessness within five years. It would help families with minors avoid losing their homes in the first place or help them get sheltered without spending days, weeks or months on a waitlist.

“As governor I actually want to get something done. I don’t want to talk about this for a decade,” Newsom said in a news conference at a former San Diego Residence Inn that has been converted into housing for 177 previously homeless people.

“What’s happening on our streets and sidewalks is unacceptable," he said.

The Democratic governor, who faces a recall election this year, seized on the twin issues of homelessness and housing affordability early on in his first term as governor. The nation’s most populous state has an estimated 161,000 people experiencing homelessness, more than any other state. Advocates say they can't house people quickly enough with a shortage of units and high rents.

The largest concentration of homelessness is in Los Angeles, where Mayor Eric Garcetti last month vowed to spend nearly $1 billion to move some of the 61,000 homeless people in Los Angeles County off the streets. Rows of tents, cardboard shelters, battered RVs and makeshift plywood structures have now expanded beyond the notorious Skid Row throughout the nation’s second-most populous city.

One of them is Lindsey Prescott, who made an unplanned appearance at Newsom's news conference after her 18-month-old daughter Mia waved at the governor when he arrived at a converted Residence Inn operated by Father Joe's Villages.

Prescott said she was homeless for five years, struggling with addiction after her mother died, and lost her daughter to foster care. She said she got Mia back in May after she stopped using drugs and was selected to move into the former hotel.

“I feel normal,” said Prescott, as Mia darted around an interior patio next to a tennis court. “I’m a mom. I have my daughter. She has her crib next to my bed. I go to the grocery store. I cook.”

Prescott expects to stay at the converted hotel for two years, then move to an apartment or house. There is no limit to how long people can stay at Father Joe's, and some may choose to live permanently.

Nan Roman, president and CEO of the National Alliance to End Homelessness, called Newsom's hotel and motel programs gamechangers that took advantage of the pandemic to make real changes. A topsy-turvy real estate market and the federal government throwing money at local governments make it an ideal time to expand housing, she said, but lots of coordination is needed on things such as rental subsidies and ongoing care to make sure people don't end up back on the streets.

“If we couple it with actually taking steps to close our affordable housing gap, it could be good," said Dr. Margot Kushel, director of the Center for Vulnerable Populations at the University of California, San Francisco. “The people who are homeless right now do need a response today, and not five years from now.”

Later Tuesday, Newsom traveled to a trash-strewn lot adjacent to a homeless encampment on a freeway overpass near downtown Los Angeles, where he announced a $1.5 billion program to clean up garbage and spruce up neighborhoods around the state.

With a bank of TV cameras tracking him, Newsom pulled on a pair of gloves and grabbed a garbage picker, stuffing plastic bags with debris. from an old high-heeled shoe to a discarded sleeping bag and tent.

He vowed that he'll make sure the state has sustained funding for homelessness while he's governor, but he sounded dubious about establishing a dedicated funding stream, saying it could create a financial shackle that might prevent the state from meeting other needs.

Advocates for the homeless expressed concern over the proposed clean-up money, saying they hope it’s not an excuse for encampment sweeps.

If Newsom’s plan wins support from the Legislature, its implementation would depend heavily on the willingness of local governments and communities to go along, which is often a significant barrier.

“Every community group that you go to demands that you solve the problem of homelessness, and then in the exact same meeting they’ll demand you don’t solve it anywhere near them,” said San Diego County Supervisor Nathan Fletcher, a fellow Democrat who appeared with Newsom.

The governor's proposal is part of a $100 billion pandemic recovery plan Newsom is rolling out this week, thanks to an astounding $76 billion budget surplus and $27 billion in new funding from the federal government’s coronavirus spending bill.