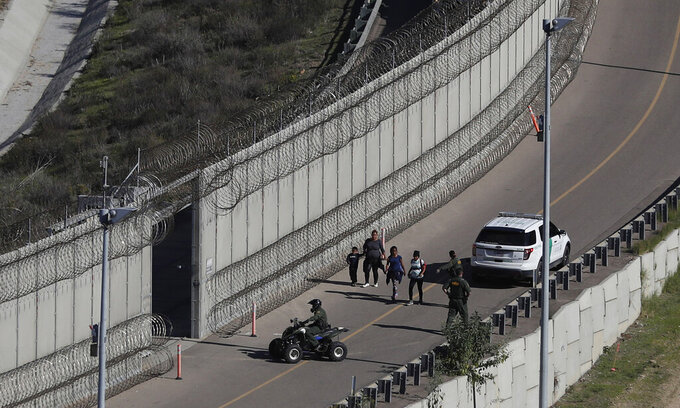 FILE - In this Dec. 16, 2018, file photo, Honduran asylum seekers are taken into custody by U.S. Border Patrol agents after the group crossed the U.S. border wall into San Diego, in California, seen from Tijuana, Mexico. The state of California is freeing up to $28 million to help asylum-seekers released in the U.S. with notices to appear in court with hotels, medical screenings, and transportation. California's generosity is a stark contrast to Arizona and Texas, where border state officials have challenged and sharply criticized President Joe Biden's immigration policies. (AP Photo/Moises Castillo, File)

SAN DIEGO (AP) — California is freeing up as much as $28 million to help immigrants arriving from Mexico and being released in the U.S. until their court dates, a sharp contrast from other border states that have emerged as foes of President Joe Biden's immigration policies.

The funding, expected to last through June, comes as Biden unwinds former President Donald Trump's policy to make asylum-seekers wait in Mexico until their court hearings. It will pay for hotel rooms for immigrants to quarantine during the coronavirus pandemic before going to their final destinations throughout the U.S.

Money also will go to Jewish Family Service of San Diego to provide food, transportation and help with travel logistics. The state will fund health services for the short stays, including COVID-19 testing.

Last week, the Biden administration began allowing people into the United States who had been forced to wait south of the border under Trump's “Remain in Mexico" policy. On his first day, Biden suspended the program for new arrivals.

An estimated 26,000 people with active cases will be allowed into the U.S., with about 25 people released a day in San Diego.

“This is what happens when California and Washington are talking with each other instead of at each other,” said H.D. Palmer, spokesman for the California Department of Finance.

The first asylum-seekers waiting in the Mexican border city of Matamoros, home to a migrant camp with squalid conditions, were processed for entry Thursday in Brownsville, Texas. Processing began Friday in El Paso, Texas.

At the same time, the U.S. is releasing more asylum-seekers who are not enrolled in “Remain in Mexico” into the country, as it did for hundreds of thousands of people before Trump foisted the responsibility of hosting asylum-seekers on Mexico in 2019.

While most people are quickly expelled without an opportunity to seek asylum under pandemic powers that Trump instituted and Biden kept in place, limited releases in the U.S. have raised financial and humanitarian concerns in some border cities.

“There’s no plan of action once Border Patrol releases migrants in city centers from being detained,” Bruno Lozano, mayor of the South Texas city of Del Rio, said in an interview.

Lozano posted a YouTube video last week calling on the Biden administration to stop releasing migrants during a winter storm that ravaged Texas, knocking out power and water for several days in many cities. The Border Patrol resumed releasing migrants in Del Rio on Feb. 20 after the cold passed.

Lozano said Friday that border agents have resumed releasing people in Del Rio and nearby cities. He noted that nonprofit groups provide cellphones, food and clothing to people leaving border custody and called on federal authorities to ramp up vaccinations in border communities or provide hotel rooms where migrants who test positive can quarantine.

In Yuma, Arizona, Mayor Douglas Nicholls estimated that by the end of Thursday, some 230 migrants, including many families with children, had been released since Feb. 15. Many are dropped at a Greyhound bus stop outside a discount store in a rural area.

Nicholls wants state and federal officials to transport migrants to larger cities with more infrastructure and resources, as the federal government did during Trump's presidency.

Texas has sent 10,000 rapid COVID-19 tests to Brownsville for arriving migrants. City spokesman Felipe Romero says the tests are administered at the local bus station and anyone who tests positive is told to isolate.

In El Paso, the Annunciation House shelter is receiving 25 immigrants daily from the Remain in Mexico program. The shelter expects releases to double in the coming weeks and perhaps reach 75 a day by the end of March, director Ruben Garcia said.

California has so far been the most generous with aid. Besides the new funding, it's already spent nearly $12 million to help about 30,000 asylum-seekers at the border since Trump’s presidency.

With Biden in the White House, Arizona and Texas have emerged as chief critics of immigration policy, a position that California proudly took during the Trump years. Texas successfully sued to block Biden's 100-day moratorium on deportations.

Texas and Arizona signed agreements with the U.S. Department of Homeland Security in Trump's final days that could delay any changes to immigration policy. The Biden administration has rejected them.

Associated Press writers Nomaan Merchant in Houston and Anita Snow in Phoenix contributed to this report.