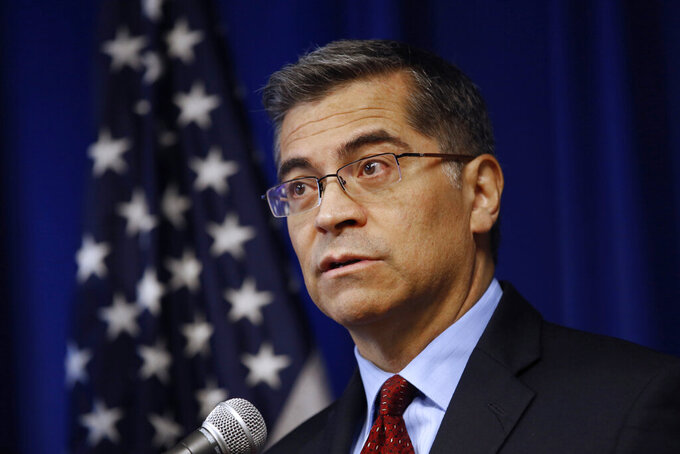 FILE - In this Dec. 4, 2019, file photo, California Attorney General Xavier Becerra speaks during a news conference in Sacramento, Calif. California's attorney general and local officials sued the nation's largest senior living home operator Monday, alleging that the company misled consumers on quality ratings and broke laws intended to protect patients when they are discharged from a facility. The suit centers on Brookdale Senior Living Inc.'s 10 California-based skilled nursing facilities, but the Tennessee-based company operates in 43 states. "We are holding Brookdale accountable for artificially increasing its profits by cutting corners when transferring or discharging its patients," said California Attorney General Xavier Becerra, who is awaiting Senate confirmation for secretary of health and human services in the Biden administration. (AP Photo/Rich Pedroncelli, File)

The company endangered the health of “tens of thousands” of patients and forced families to hurriedly find them new homes by failing to give at least 30 days notice of transfers or discharges as required for skilled nursing facilities, the suit alleges. It says the company also failed to adequately prepare patients to be discharged or transferred.

One was an 80-year-old man with Alzheimer's disease, congestive heart failure and five other conditions who was released without proper notice or a discharge plan, the lawsuit says. Within a week, he was admitted to a hospital.

A 78-year-old man who had heart and kidney disease, trouble walking, and was recovering from pneumonia also was released without proper notice or a plan, with a catheter used to administer drugs still in his body, the lawsuit says. His family wasn't told how to administer his medications or supplemental oxygen, it alleges.

“Brookdale does this so it can fill its beds with residents who will bring in more money,” the suit alleges. It says the company will discharge patients when their Medicare coverage ends, “regardless of the care and treatment needs," rather than keep them and receive lower levels of reimbursement.

The company said it is disappointed in the allegations and denied engaging in fraudulent conduct.

"Brookdale is dedicated to providing quality care to our residents and patients, and we take our mission of enriching the lives of those we serve seriously,” it said in a statement.

The Tennessee-based company operates in 43 states. It says it has 726 independent living, assisted living, memory care and continuing care retirement communities capable of serving about 64,000 residents.

Brookdale also gave false information to the Centers for Medicare & Medicaid that it uses to award what are known as “star ratings” — a scale of one to five stars — which are intended to guide consumers in picking a quality facility, the suit alleges. Each facility gets an overall rating and ones for inspections, staffing and quality of care.

The company over-reported its nursing staffing hours and was given unwarranted four-and five-star ratings, the suit contends. It alleges the practice violated both the Unfair Competition Law and False Advertising Law.

“We are holding Brookdale accountable for artificially increasing its profits by cutting corners when transferring or discharging its patients," said California Attorney General Xavier Becerra, who is awaiting Senate confirmation for secretary of health and human services in the Biden administration. "It lured individuals to its facilities through false promises about providing the highest quality care.”

The rating system was the subject of a l engthy, critical story Saturday by The New York Times. The newspaper said nursing home companies misled the star rating system in ways that hid long-running problems and were unprepared for the coronavirus pandemic that ran rampant through their vulnerable elderly and sick populations, killing more than 130,000 residents.

The rating system was particularly important to families during the pandemic, when they often couldn't visit facilities in person, the newspaper noted. It cites a lawsuit brought by a former resident of a Brookdale facility in Kentucky as one concern.

The suit was led by Kern County District Attorney Cynthia Zimmer, who said in a statement that when nursing home companies break the rules, “they create environments that subject the most vulnerable among us to unnecessary victimization, stress, and even physical harm.”

She was joined by the district attorneys of Alameda, San Diego and Santa Cruz counties, as well as Los Angeles City Attorney Mike Feuer. The suit seeks a permanent injunction requiring better practices as well as civil penalties of $2,500 for each violation of the Business and Professions code that is proved at trial.