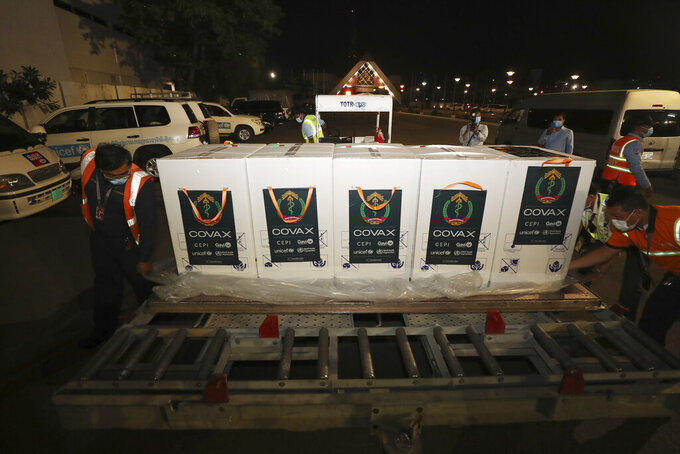 PHNOM PENH, Cambodia (AP) — Cambodian Prime Minister Hun Sen was inoculated Thursday with a vaccine supplied by the World Health Organization’s COVAX initiative, as a plan to immunize up to two-thirds of the country's population was on track to be completed by the end of the year.

Hun Sen received a shot donated by India, one of 324,000 doses of the Oxford-AstraZeneca vaccine that arrived Tuesday.

His vaccination comes as Cambodia fights to quell a fresh surge in infections that has mostly affected the Chinese community in Sihanoukville, a city home to the country's main port and huge Chinese investments and construction projects.

Hun Sen said travel to and from the city was being restricted.

Cambodia reported 31 new virus cases on Thursday, for a total 909 since the pandemic began.

The latest outbreak has been traced to a foreign resident who broke hotel quarantine on Feb. 4 and went to a nightclub. That caused a slew of infections and led the government on Feb. 20 to announce a two-week closure of all public schools, cinemas, bars and entertainment areas in Phnom Penh.

Cambodia, which has yet to report any virus deaths, received its first shipment of 600,000 doses of a Chinese-produced vaccine on Feb. 7, part of 1 million doses Beijing is donating. The country began its vaccination program on Feb. 10, starting with Hun Sen’s sons, government ministers and officials.

Hun Sen received the Indian-manufactured vaccine because he is 68. In China, the Chinese Sinopharm vaccine was approved only for people 18-59 years old because that was the population studied in clinical trials. While there is not yet data on its effectiveness for other age groups, other countries at their discretion may use it for older people.

China is Cambodia’s biggest investor and the closest political partner of Hun Sen, who is shunned by some Western nations who consider his government to be repressive. Cambodia, in turn, backs Beijing’s geopolitical positions in international forums on issues such as China’s territorial claims in the South China Sea.

In addition to China’s donation, Australia has announced a grant of $28 million to purchase 3 million doses, and Cambodia is set to get a total of 7 million doses through the COVAX initiative.