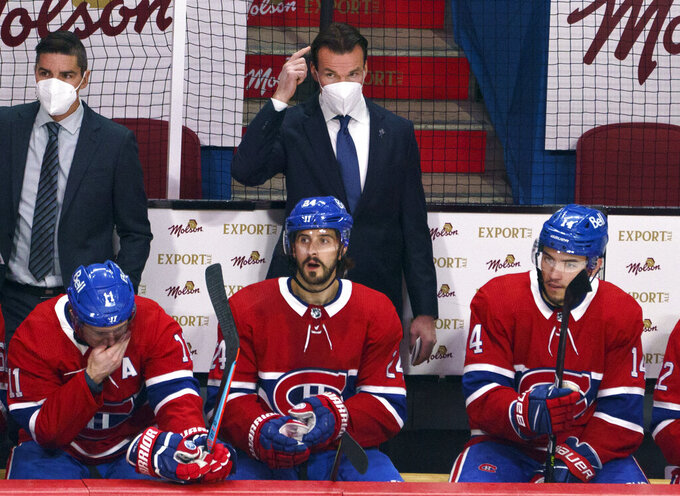 The NHL said Ducharme received a confirmed positive COVID-19 test nine days since receiving his second vaccine dose. No other Canadiens players or members of the Vegas Golden Knights have tested positive.

“I’ve talked to Dom twice today — he’s doing fine," Bergevin said. “He’s at home. As far as how long he’s going to be out, we’re dealing with and talking to Health Quebec and also NHL protocols. It’s an ongoing situation, so I can’t tell you how long.”

“As of this morning, (Ducharme) was in contact with our coaches,” Bergevin said in French. "He prepared the game plan. And I would say he won’t be in contact between periods, but he’ll definitely be in touch after the game and he’ll prepare the plans for Game 4. He’s at home, but he’s implicated with everything that’s going to happen and the game plan for now.”

The Canadiens leads the series 2-1.

Ducharme was promoted to interim head coach from assistant after the firing of Claude Julien on Feb. 24. Julien missed time during the 2020 playoffs last summer after being hospitalized with chest pains.

“I don’t see any connection between the two," Bergevin said Friday. “Circumstances are pretty different. But I can guarantee that we’ll be ready.”

Under Ducharme, the Canadiens finished fourth in the all-Canadian North Division and upset Toronto and Winnipeg in the first two playoff rounds.

The Golden Knights have already seen this scenario play out in this postseason. Colorado Avalanche coach Jared Bednar missed a morning skate because of a COVID-19 testing irregularity. He was then cleared to coach in Game 6 of the second-round series against Vegas.