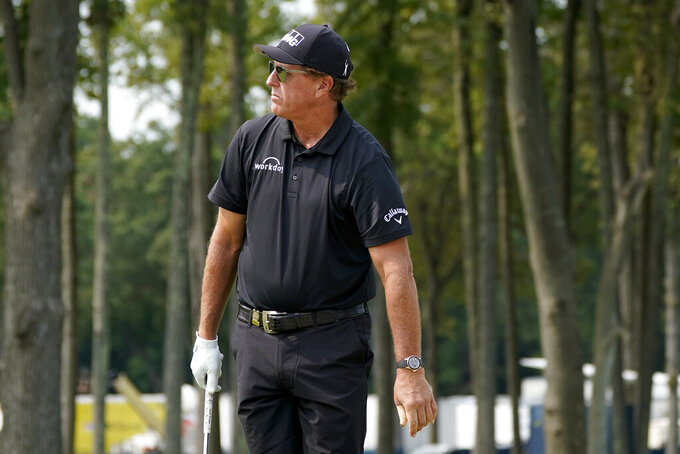 Phil Mickelson, of the United States, prepares to putt on the fifth green during a practice round for the US Open Golf Championship, Wednesday, Sept. 16, 2020, in New York. (AP Photo/Charles Krupa)

MAMARONECK, N.Y. (AP) — The USGA considers this U.S. Open a success even before the opening tee shot, mainly because it's being played this year at Winged Foot. And that was seriously in doubt when the COVID-19 pandemic took hold in the spring.

Winged Foot is about 5 miles from one of the early hot spots of the coronavirus. Mike Davis, the CEO, said the USGA was on the verge of taking the U.S. Open to Los Angeles in December as its best chance of playing it in 2020.

That changed on April 6.

The R&A said it was canceling the British Open. The Masters took the November spot on the schedule. The PGA Championship moved from May to August.

“It really wasn't until the day before we went public with the schedule that we realized that the R&A’s Open across the pond couldn’t be played in September, which gave us an opportunity to play in September at this wonderful, storied golf course,” Davis said.

John Bodenhamer, the senior managing director of championships, recalls being in a conference room at USGA headquarters on March 13 as sports started to shutdown, from the NCAA tournament to the NBA and NHL, The Players Championship in golf.

“It's one of those days you'll never forget,” he said.

Bodenhamer said the USGA's medical advisers told them to be patient about the hot spot near Mamaroneck because that could change over time. From there, he said the objective was to let health and safety guide every decision, and to try to play as many USGA championship as possible.

“And third, our intention was always to play at Winged Foot,” Bodenhamer said. “And when that September date came, I can tell you Mike and I looked at each other. ‘Let’s go. Let's do this.'”

The U.S. Open will be in California next year at Torrey Pines.

The USGA announcing last week that another office and a modern test center would be built in Pinehurst, North Carolina, was also a step toward the U.S. Open developing a rotation of courses.

The U.S. Open now is committed to be at Pinehurst No. 2 five times through 2047. Still to be determined is what other courses the U.S. Open has in mind as a part of a rotation. Pebble Beach and Oakmont are obvious choices, while Shinnecock Hills and Winged Foot would seem to figure into the mix.

“We just believe after talking to a lot of the players who play in U.S. Opens, a lot of our past champions, they communicated a consistent message, saying, '‘We want to go to the best sites, and we want to go there more often,’” USGA CEO Mike Davis said Wednesday.

Davis said Nick Price, who serves on the USGA board, said once that it matters a little more to a U.S. Open champion when he wins on a reputable course.

“And I think all of us took that to heart,” Davis said.

Players rarely talk about atonement or even a golf course owing them one.

Rory McIlroy believes that to be the case. He went through that at Augusta National after losing a four-shot lead in the final round at 2011. And he can see where some might wonder if Phil Mickelson feels that way at Winged Foot after a double bogey cost him the U.S. Open in 2006.

McIlroy won the next major, the U.S. Open at Congressional.

“I went into '12 at Augusta ... yeah, the memories that come back and things that you would have done differently, of course they all come back. But it didn’t feel like I was trying to get one over on the course or trying to settle a score.”

It's different for Mickelson in one regard. McIlroy was 23 when he returned to Augusta National. Mickelson is 50 upon returning to Winged Foot.

“I'm sure he’s made his peace with the fact that he may never win this tournament,” McIlroy said. “He could go out this weekend and blitz it, but at the same time, I think when you get to that stage in your life and everything, and his life has gone the way it has, his career, his family, everything seems to be in a good place, I think he’s probably made his peace with what happened here 14 years ago.”

Introductions can be in order at most U.S. Opens given the number of players that come start in local qualifiers and play on some of the smaller tours. That won't be the case for the Canadian grouping.

Mackenzie Hughes, Corey Conners and Adam Hadwin played a practice round Wednesday. They'll be together the next two days at Winged Foot.

No other countries were grouped together, such as England (10 players), Australia (9), France or Japan (4 each).

Instead, the USGA seemed intrigued by the college pairings, with alumni from Oklahoma State, Arizona State and Georgia together. If that was the case, Hughes raised a good question Wednesday.

Why no love for Kent State?

Hughes, Conners and Taylor Pendrith each attended Kent State. A powerhouse? Maybe not, but the Ohio school did produce a major champion in Ben Curtis.

From the caddie corner, Jimmy Johnson is back on the bag this week for Justin Thomas. He hasn't caddied for the last month because of dizziness brought on by a change in his blood pressure medication. John Wood, who left Matt Kuchar last month, is now working for Cameron Champ. Wood and Champ are from Sacramento, California, and Wood was instrumental in getting him noticed on the junior scene. ... The USGA says it will use some Winged Foot caddies on longer holes to help serve as spotters for shots that go into the thick rough, especially with no spectators around.