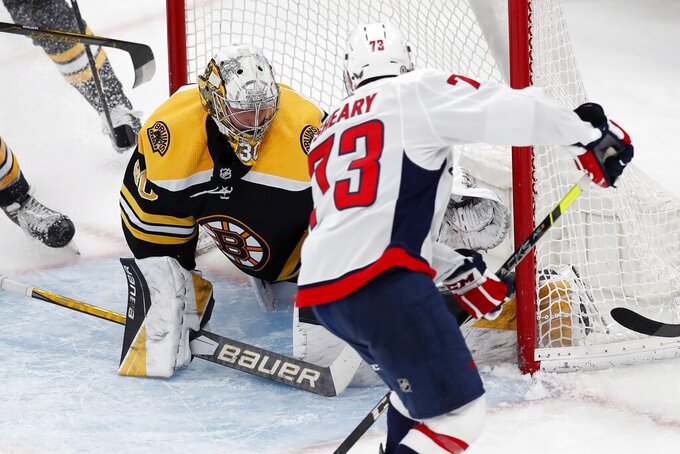 Conor Sheary and Lars Eller each also scored twice, and Tom Wilson and Nic Dowd each had one of the season-high goals scored by the Capitals in their first victory in regulation against Boston this season. The Bruins had gotten at least a point in the clubs’ five previous meetings (3-0-2).

Rookie Vitek Vanecek stopped 34 shots, but lost a chance for his second shutout when Craig Smith scored a power-play goal 3 minutes into the third.

The Bruins played a video tribute for Chara on the Jumbotron midway into the opening period with Washington already leading 2-0. He got a standing ovation from the TD Garden crowd, which was limited by the state to 12% capacity because of the COVID-19 pandemic. Skating near his bench, Chara appeared touched, raising his stick and clapping back to the crowd before patting his chest with his left glove and waving.

Washington jumped ahead 3-0 in the opening half of the period, starting when Oshie one-timed Nicklas Backstrom’s pass into the net from the slot for a power-play goal at 7:33.

Chara said on a Zoom interview after the morning skate that his wife and three children, who still live in Boston, were expected to be at the game.

During Chara’s first game in Boston — his first since signing a one-year contract with Washington as a free agent during the offseason — the Bruins had a video tribute with recorded messages from fans thanking him.

The Bruins were missing four of their top defensemen. Charlie McAvoy (third straight game), Matt Grzelcyk (injured Saturday) and Brandon Carlo (fifth straight) are all out with an undisclosed upper-body injury. Kevan Miller, working back from offseason knee surgery, didn’t play because it was consecutive days.

The Capitals traded Jonas Siegenthaler to New Jersey on Sunday for a 2021 third-round pick. Washington cleared $800,000 in salary-cap space before the trade deadline Monday by dealing one of the eight defensemen on its active roster.

The 23-year-old Siegenthaler is a restricted free agent after this season. A 2015 second-round pick from Switzerland, he has 13 points in 97 regular-season NHL games, all with the Capitals.

Washington defenseman Brenden Dillon and Boston forward Chris Wagner dropped the gloves for a fight 4 seconds into the game. ... Backstrom needs two games for 1,000 in his career. ... It was Boston’s first of a five-game homestand. ... It was a season high for goals allowed by Boston, and the first time the Capitals scored eight since an 8-1 win at Atlanta on Jan. 9, 2010.