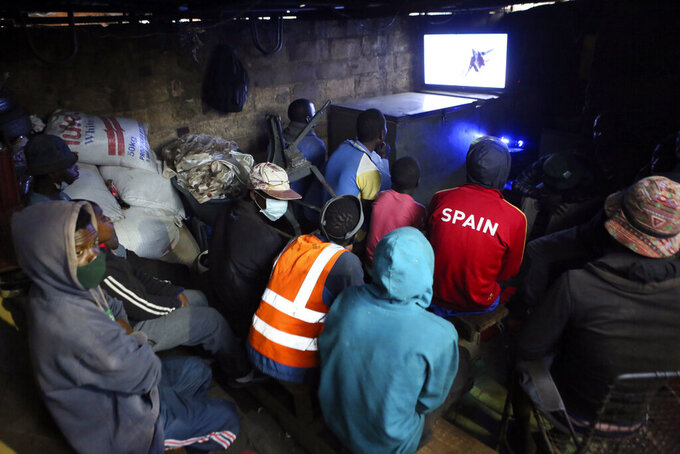 In this photo taken on Tuesday, June, 23, 2020, a group watch a movie at a makeshift home cinema in a neighborhood in Harare. Zimbabweans starved for entertainment, including some children, have turned to petty gambling and other activities in poor neighborhoods where many have lost their livelihoods. Some defy social distancing, crowding shoulder to shoulder. (AP Photo/Tsvangirayi Mukwazhi)

HARARE, Zimbabwe (AP) — It’s come to this: Some children in Zimbabwe are so tired of the weeks of coronavirus lockdown they are yearning to return to school.

“This is all now boring,” 10-year-old Tafadzwa Mafuta said. “I miss reading, writing and playing with my friends.”

Zimbabweans starved for entertainment, including some children, have turned to petty gambling and other activities in poor neighborhoods where many have lost their livelihoods.

Now he spends his days by a crowded pool table in the poor Mbare suburb in the capital, Harare, betting on games with the little money he has.

Before coronavirus, pool was a way for him to pass time. Now he jostles with some juveniles for a chance to win some money at the pool table to survive.

“Pool is a game I enjoy … it has also become my meal ticket,” he said.

Elsewhere, a group of young men and children knelt around a sack spread on the dirty ground, playing a game of cards. Money exchanged hands fast, even as a soldier in a truck used a loudspeaker to order people back into their homes.

The league has threatened to punish players taking part in the unsanctioned matches, but players, unpaid for months due to the lockdown, say they need the money to keep hunger at bay.

Even children are in on the action, betting small amounts on the teams.

Zimbabwe's education ministry says it plans to begin a phased opening of schools at the end of July, although teacher unions argue that it is still unsafe to do so.

Some parents say they cannot afford to pay for online classes being offered by some professionals.

“They should just return to school as normal, they can wear masks and the teachers can enforce social distancing,” said Pertunia Sibanda of Mbare suburb, adding, “It’s better than having them here busy playing cards for money.”

She said the only time she gets to spend “quality time” with her three children is when, like many people around the world, they are watching their favorite entertainers online or on state television.

The music shows have come as a relief for both entertainment-starved Zimbabweans and artists struggling to make ends meet.

Musician Progress Chipfumo takes part in the “Lockdown Live” gigs that have attracted tens of thousands of viewers in recent weeks. Entertainers say the lockdown has reduced them to charity cases. The government has promised to help them with basics such as food.

“Right now I don’t have a single cent,” said Chipfumo, whose last live show was three months ago. The lockdown shows “help me to connect with my fans, and maybe with a few dollars.”

“The musicians are not getting much out of this exercise because most of them are just sacrificing their services to try and entertain stressed Zimbabweans” said one of the gigs’ promoters, Tinashe Mutarisi, who recently converted a warehouse at his paint manufacturing company into a recording studio.

For children such as 10-year old Tafadzwa, nothing, including the television shows, beats school, which he once despised for being too routine and tedious.

“I used to love the holidays, but this is now just too much,” he said.