Cards finally back home, rally for 3 in 9th to beat Reds 5-4 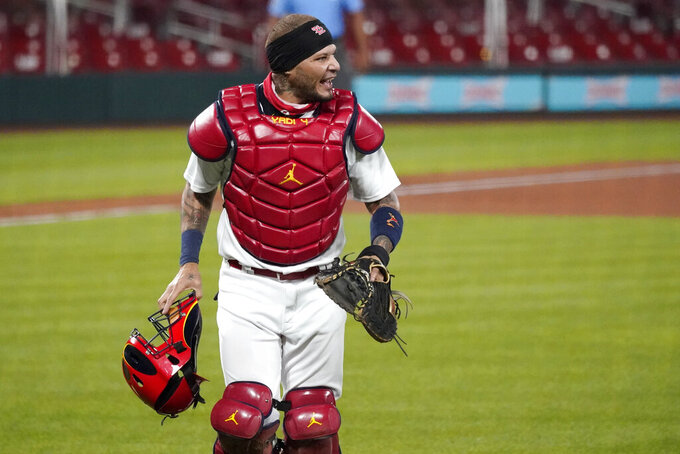 St. Louis Cardinals catcher Yadier Molina walks off the field after a ground out by Cincinnati Reds' Freddy Galvis to end the top of the sixth inning of a baseball game Thursday, Aug. 20, 2020, in St. Louis. (AP Photo/Jeff Roberson)

St. Louis played its first home game since July 26. The Cardinals were idle for 17 days after 10 players tested positive for the virus.

Yadier Molina drove in three runs, including an RBI single in the ninth. The nine-time All-Star catcher made his first appearance since being sidelined by COVID-19 earlier this month.

A hit batter and a balk helped put the Cardinals in position in the ninth, and Wong hit a one-out, bases-loaded fly over the head of center fielder Travis Jankowski to win it.

St. Louis put the first four runners on in the ninth against closer Raisel Iglesias (1-2). Dexter Fowler loaded the bases with a single and Molina hit a grounder off the glove of Iglesias, cutting the deficit to 4-3.

Iglesias followed with a run-scoring balk to tie it and set up Wong.

Cincinnati starter Sonny Gray struck out six over six innings to bring his NL-leading total to 51. He walked four.

Freddy Galvis homered off St. Louis starter Adam Wainwright, who gave up four runs, two of them earned, on six hits in seven innings. The 38-year-old retired the last 15 batters he faced after allowing a run-scoring double to Mike Moustakas in the third that pushed the lead to 4-2.

The Reds pushed across of a pair of unearned runs in the first on errors by third baseman Brad Miller and first baseman Paul Goldschmidt.

The Cardinals just completed a stretch of eight games in five days that ended Wednesday in Chicago. They will play 50 games over the next 42 days to conclude the season.

ON THE WAY BACK

St. Louis INF Paul DeJong was sent to the Cardinals alternate camp in Springfield, Missouri, to resume workouts as he returns from COVID-19. DeJong was one of 10 players to come down with the virus. St. Louis manager Mike Shildt indicated DeJong could return as soon as Monday.

Cardinals: C Matt Wieters was placed on the 10-day injury list with a broken toe.

Reds RHP Anthony DeSclafani (1-1, 6.23) will face RHP Dakota Hudson (0-2, 5.40) is the second game of the four-game series on Friday. DeSclafani gave up nine earned runs in two innings of a 9-6 loss to Pittsburgh on Aug. 13. Hudson is 3-0 in four career starts against Cincinnati.