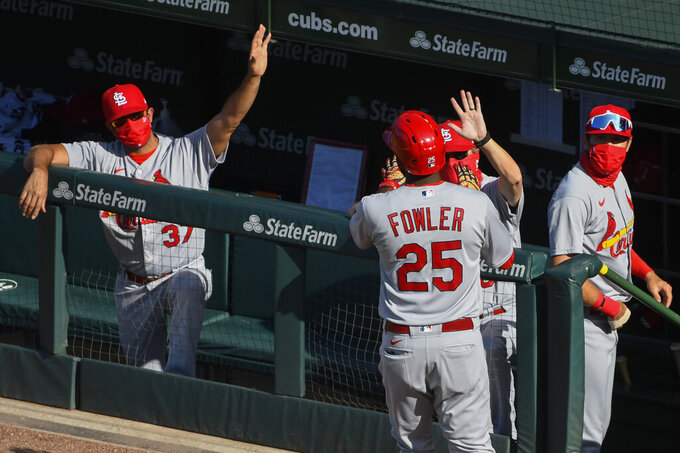 St. Louis Cardinals' Dexter Fowler (25) celebrates in the dugout after his home run in the third inning of Game 1 of a baseball doubleheader against the Chicago Cubs, Monday, Aug. 17, 2020, in Chicago. (AP Photo/Matt Marton)

CHICAGO (AP) — St. Louis Cardinals outfielder Dexter Fowler tried to do something nice for rookie teammate Max Schrock, and it turned into quite an adventure.

And Fowler knows all about adventures at Wrigley Field.

Fowler's trouble started when Schrock connected for his first career homer during the fourth inning of the second game in Monday's doubleheader against the Chicago Cubs.

The 34-year-old Fowler decided to try to get the ball back for Schrock. While he was making his way out to the bleachers in right, teammate Harrison Bader experienced some discomfort while legging out an infield single.

“I found a way to get back up there. Up the stairs, all around the ballpark,” said Fowler, who played for Chicago for two seasons before signing with St. Louis in December 2016. "And I had never been up that side of the ballpark.

“Ended up getting out there, and then Bader comes down and he's like he messed up something. The trainer's coming out and I'm like ‘You’ve got to be kidding me.'”

Bench coach Oliver Marmol motioned to Fowler that he might need to come into the game, but Fowler didn't have the right shoes on. He then sprinted all the way back to the dugout and was putting on his cleats when Marmol told him he didn't need him anymore.

Fowler then went back to get Schrock's ball and ran into an authenticator from Major League Baseball.

Fowler got the ball and gave it to the authenticator. Then a sweaty Fowler made his way back to the visiting dugout area, where he caught the attention of first base umpire Laz Diaz.

“He comes to me and he goes ‘What the hell are you doing up there?’” a chuckling Fowler said. “I go ‘I went to get the man’s home run ball,' and he goes ‘I’ve never seen that before. They're calling to right field for a guy to come run the bases.'”

That wasn't the only strange part of the doubleheader for Fowler. He watched part of the action with some teammates in some seats behind the visiting on-deck circle before they were told they had to move.

“We wanted to take the game in from those seats and then (Major League Baseball) calls like ‘Hey, you guys can’t be over there. You've got to go down there,'” Fowler said. “I'm like ‘We were just trying to have fun, take in the game from a different perspective,' and they weren't having it. I was kind of disappointed about that."

Asked if MLB explained its reasoning, Fowler said: “No, but I'm sure it had to do something with money.”

Fowler and the Cardinals are ramping up again after their season was derailed by a coronavirus outbreak, leading to 18 confirmed cases in the organization. The team is in the midst of playing 53 games over 44 days, including 10 doubleheaders.

St. Louis swept a doubleheader Saturday against the White Sox in their first action since a 3-0 loss at Minnesota on July 29.