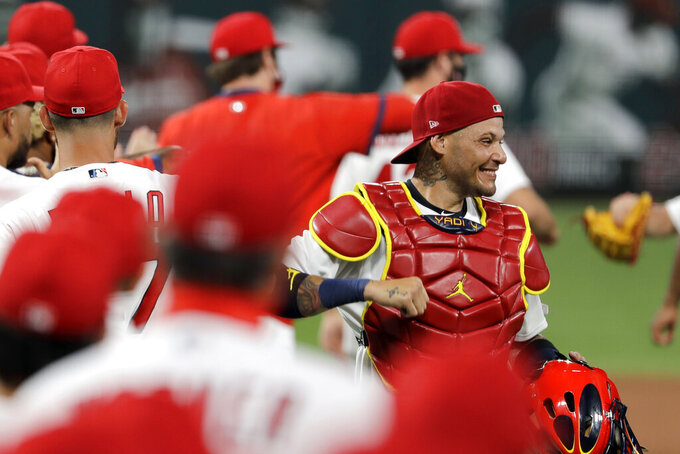 FILE - In this Friday, July 24, 2020, file photo, St. Louis Cardinals catcher Yadier Molina, right, celebrates a 5-4 win over the Pittsburgh Pirates in a baseball game in St. Louis. Molina says he’s one of the players on his team who has tested positive for the coronavirus. The nine-time All-Star revealed his diagnosis Tuesday, Aug. 4, 2020, in a Spanish-language Instagram post. (AP Photo/Jeff Roberson, File)

ST. LOUIS (AP) — St. Louis Cardinals catcher Yadier Molina says he’s one of the players on the team who tested positive for COVID-19.

The nine-time All-Star revealed his results Tuesday in a Spanish-language Instagram post. Soon afterward, the Cardinals issued a release naming six of the players who have tested positive.

The others are infielders Paul DeJong, Edmundo Sosa and Rangel Ravelo along with pitchers Junior Fernandez and Kodi Whitley.

“I am saddened to have tested positive for COVID-19, even after adhering to safety guidelines that were put in place,” Molina said in a release issued by the team. “I will do everything within my power to return as soon as possible for Cardinals fans, the city of St. Louis and my teammates."

Cardinals general manager John Mozeliak said Monday that seven players and six staff members had tested positive. At the time, Mozeliak said the people to test positive hadn’t been identified publicly because they had declined to have their names released.

The Cardinals said Tuesday that six players had decided to grant permission to have their names revealed.

“I will approach my healing as I do all other things in my life – with education, commitment, and persistence. I look forward to re-joining the team soon and ask that you respect my privacy at this time,” DeJong said in a statement released by the team.

More transactions are expected on Wednesday.

The Cardinals' coronavirus outbreak resulted in the postponement of St. Louis' scheduled three-game weekend series at Milwaukee as well as a four-game series with Detroit that was supposed to run Monday through Thursday. The Cardinals have played just five games this season and are hoping to return to action Friday hosting the Chicago Cubs.

As of now, the Cardinals who have tested positive have returned home while the rest of the team remains isolated in Milwaukee hotel rooms. Their last game was July 29 at Minnesota.

Mozeliak said Monday that five of the 13 overall members of the Cardinals’ traveling party to test positive were asymptomatic. The other eight had minor symptoms including headaches, coughs, sniffles and low-grade fevers. Mozeliak said none of the eight had required hospitalization.