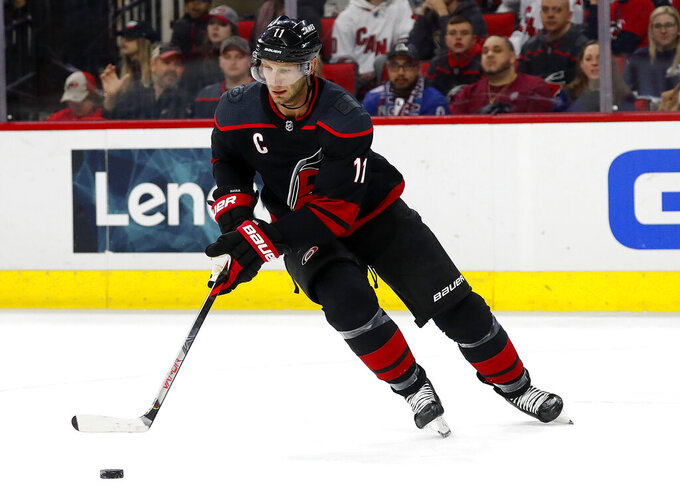 FILE - In this Feb. 28, 2020, file photo, Carolina Hurricanes' Jordan Staal (11) controls the puck against the Colorado Avalanche during the first period of an NHL hockey game in Raleigh, N.C. Staal helped the Hurricanes reach the Eastern Conference finals in 2019 and return to the playoffs in 2020. (AP Photo/Karl B DeBlaker, File)

The Carolina Hurricanes have gone from spending a decade out of the playoffs to putting together consecutive postseason appearances. They’re hoping that has them poised to accomplish much more in this delayed season.

The Hurricanes have a roster filled with players who reached the Eastern Conference finals in 2019 in the franchise's first playoff trip since 2009. The core of that group followed by returning to the playoffs after the NHL’s restart amid the coronavirus pandemic.

That two-year run has elevated expectations, with president and general manager Don Waddell saying after last season that team talk was no longer about “just making playoffs anymore.”

“It didn’t end the way we wanted it to end and I think that’s the fuel here, the fire to say, ‘OK we’ve got to be better than that,’” third-year coach Rod Brind’Amour said.

“That’s what’s great about having kind of the same group back. They’ve suffered here. They went through that together. And we want better things. I think that’s what you’re going to see out of these guys.”

The Hurricanes’ returnees include center Sebastian Aho (38 goals) and winger Andrei Svechnikov (24 goals) as young stars, defenseman Dougie Hamilton (named to last year’s NHL All-Star Game before being sidelined by injury) and two goaltenders who each helped the Hurricanes to postseason wins.

“Everyone knows the systems already,” defenseman Jaccob Slavin said as the team began a shortened training camp. “Guys are ready to go.”

The Hurricanes are trying to make three straight playoff trips for the first time since relocating to North Carolina in 1997 from Hartford, Connecticut.

Some things to know about the Hurricanes this season:

The Hurricanes are eager to see Svechnikov’s third-year growth.

The 6-foot-2 winger and No. 2 overall draft pick provided a physical presence on Carolina’s top line alongside Aho last season. The 20-year-old also had the first postseason hat trick in franchise history in a Stanley Cup qualifier series win against the New York Rangers.

“During my first year, I came here, I didn’t know anyone, I didn’t know the system … and how to play hockey in the NHL,” Svechnikov said. “Obviously I got more confident. I got to know how to play every situation, every system, so it’s going to be way easier than my first two years.”

The Hurricanes return goaltenders Petr Mrazek and James Reimer, who both worked the three-game sweep of the Rangers and the five-game loss to the Boston Bruins.

Brind’Amour said the rotation sets up well in a revamped schedule that will typically feature consecutive games against the same opponent.

“It would be tough to ride one goalie in this schedule, I don’t see how you could do it,” Brind’Amour said. “It’s good to know we’ve already done this kind of rotation with these two guys and feel real confident in it."

The Hurricanes look solid up the middle with Aho, midseason acquisition Vincent Trocheck and captain Jordan Staal at center.

Trocheck, acquired from Florida at the February trade deadline, played just seven games with Carolina before the stoppage and had two assists in eight postseason games.

“I’m looking forward to having … a year of him under our belt to see kind of what he can bring,” Brind’Amour said. “Because I think we have a really good player there.”

The Hurricanes must replace the veteran presence of Justin Williams, who retired in October after a 19-year NHL career. Carolina also lost defensemen Trevor van Riemsdyk (signed with Washington) and Joel Edmundson (traded to Montreal).

The Hurricanes signed winger Jesper Fast to a three-year deal. The 28-year-old Fast played seven seasons with the Rangers, finishing with 12 goals and 17 assists last year.

The Hurricanes open Jan. 14 at Detroit in the first of a two-game set, followed by two games at Nashville. Carolina’s home opener is Jan. 21 against Florida.

The Hurricanes also have an eight-game home stand in April before closing the 56-game schedule at Nashville on May 7-8.