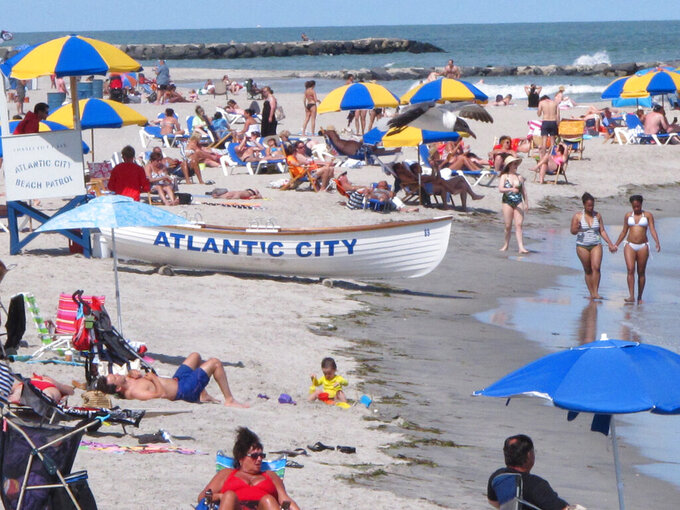 In this June 23, 2014 file photo, beachgoers fill the sand at Atlantic City N.J. On Wednesday, May 12, 2021, New Jersey legislators were scheduled to discuss two proposed measures that could have a far-ranging impact on Atlantic City's future: A bill changing the amount the city's casinos must pay in lieu of property taxes, and a bill extending the state's takeover of Atlantic City's main decision-making power for another four years. (AP Photo/Wayne Parry) 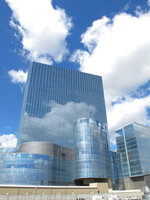 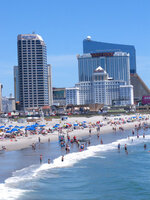 ATLANTIC CITY, N.J. (AP) — Can Atlantic City's casinos survive and thrive amid a pandemic and unending competition all around them, and are city officials ready to competently run their own government?

New Jersey lawmakers are wrestling with those questions; the answers could have a big impact on the future of the famous seaside gambling resort.

Two measures before the state Legislature deal with how much Atlantic City's casinos pay in lieu of taxes and whether the state should extend its takeover of local government power for another four years.

The state is considering updates to measures that were enacted when Atlantic City was in dire financial shape. It ran chronic budget shortages; property taxes were soaring. Many of the casinos were successfully able to challenge their property tax assessments, arguing that the assessments were based on earlier times when Atlantic City did not face as much competition from casinos in other states.

Things have improved somewhat under state supervision, including a stabilization of city finances that has been noted by Wall Street credit agencies, which have upgraded Atlantic City's rating in recent years.

A message seeking comment was left Wednesday with Mayor Marty Small. The Casino Association of New Jersey declined to comment.

Five of what were 12 casinos shut down between 2014 and 2016; two of them, Revel and the Trump Taj Mahal, have since reopened as the Ocean Casino Resort and Hard Rock, respectively. Under the takeover, the city's finances have improved, but the state is not ready to hand the reins back to Atlantic City.

A bill that would extend the state takeover was advanced Wednesday by an Assembly committee, but still needs approval by both houses of the Legislature.

“They're not out of the woods yet in terms of being totally fiscally stabilized, but they're in a better place,” Assemblyman Vince Mazzeo, an Atlantic City-area Democrat, said of the city.

He said he hopes “to give back little steps by little steps, and hopefully at the end of nine years, Atlantic City will be ready to govern itself.”

In 2016, the state passed what was known as the PILOT bill, for payments in lieu of taxes. It freed Atlantic City’s casinos from paying property taxes, instead making predictable annual payments based on a formula that took into account their gambling revenue, amount of hotel rooms, and geographic footprint.

The original measure set the payments at $120 million, to be used for paying down Atlantic City’s debt, among other purposes, but included a provision scheduled to cause an increase in payments for most properties starting in 2022.

Several things have also changed since then, including the instant success of sports betting that has made New Jersey a national leader, and the state’s ever-growing internet gambling market.

Extra revenue from those two sources has swelled the amount the casinos are billed upon for the payments in lieu of taxes — even though a significant percentage of that money goes to outside operators, and not the casinos.

A new bill would remove internet and sports betting revenue from the PILOT calculations, among other changes. The amount of new PILOT payments could go up or down in future years based on factors including a casino’s financial performance.

Casinos would need to make payments of $5 million collectively each year to Atlantic City for five years. Some of it also would go to a state redevelopment agency, as well as to a Safe and Clean Fund and an infrastructure fund, intended to finance local public improvement projects in Atlantic City. And some would go to the school system and county government.

The changes could provide savings for a majority of the casinos from what they would need to pay otherwise starting in 2022, although casino executives would not reveal the amount they expect to pay under the proposed changes.

The PILOT bill was not discussed nor acted on Wednesday, indicating changes could be in the offing before it is voted upon.