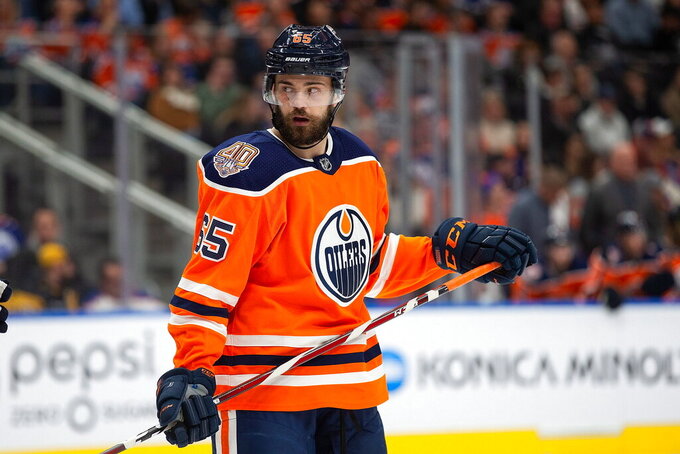 FILE - In this Oct. 23, 2018, file photo, Edmonton Oilers' Cooper Marody (65) skates against the Pittsburgh Penguins during the first period of an NHL hockey game, in Edmonton, Alberta. Cooper Marody has written a song in memory of teammate Colby Cave to raise money for a memorial fund. Cave, from Battleford, Saskatchewan, died April 11 in a Toronto hospital after suffering a brain bleed. He was 25. Marody's song "Agape" will be released Friday, June 12, 2020, on Apple Music and Spotify. Marody, from Brighton, Michigan, and Cave were teammates last season on the American Hockey League's Bakersfield Condors.(Codie McLachlan/The Canadian Press via AP, File)

Cave, from Battleford, Saskatchewan, died April 11 in a Toronto hospital after suffering a brain bleed. He was 25.

Marody’s song “Agape” will be released Friday on Apple Music and Spotify. Marody, from Brighton, Michigan, and Cave were teammates last season on the American Hockey League's Bakersfield Condors.

Proceeds go to the Colby Cave Memorial Fund established by the Oilers. The money will be directed toward mental health programs and providing access to sport for underprivileged children.

“I am so proud to be part of this project and to release this song,” Marody said Thursday in a statement from the Oilers. “This is, without a doubt, the most important song I have ever written.

“I hope you all enjoy the song and it can bring you some kind of peace.”

Cave’s wife Emily said “agape” was a word she and her late husband said to each other often.

“Agape is the highest form of love,” she said. “Selfless, sacrificial and unconditional love; it persists no matter the circumstance. I’m so grateful I got to experience this love with my best friend.”

Cave played 67 career NHL games for the Boston Bruins and the Edmonton Oilers. The center was called up for 11 games by the Oilers last season.

He was in a medically induced coma after surgery to remove a colloid cyst that was causing pressure on his brain.

The COVID-19 virus kept Emily from her husband’s bedside.

“Colb and I started three hand squeezes very early in our relationship,” she said in the statement. “He would squeeze my hand in car, I would squeeze his in the grocery store, we would do it anywhere and everywhere. We did this for years.

“The four days Colb was in the hospital, I wasn’t allowed to be with him. I got to FaceTime him twice for a few moments. I would beg him to wake up and tell him how much I loved him. I would then ask the nurse to squeeze his hands three times so he felt I was there.

“I wasn’t physically there when Colb went to heaven, but I pray through the nurse squeezing his hand like we had always done, he felt me right there beside him.”