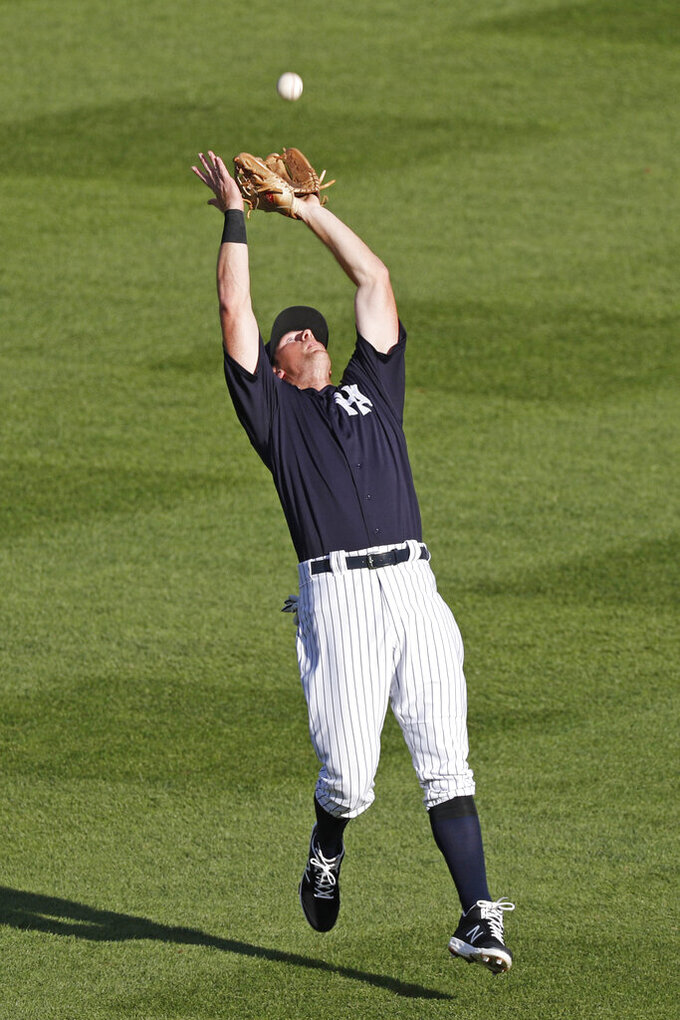 NEW YORK (AP) — Yankees pitcher Luis Cessa threw a 31-pitch bullpen on Monday as he returned from a layoff caused by a positive test for the coronavirus.

The 28-year-old right-hander is not sure how he became infected. He had been in Arizona, where he lives with his girlfriend, and they both tested positive before he was scheduled to travel to New York for the resumption of training.

Cessa said he felt sinus problems but no fever during his bout with COVID-19.

While waiting to recover, Cessa worked out with equipment in his garage and bought a net and took it to a park to throw.

“I just tried to stay in shape,” he said.

Second baseman DJ LeMahieu, the other Yankees player sidelined by a positive test for the virus, played his second straight exhibition. He went 0 for 3 against Philadelphia with a warning-track flyout to right field and got grazed on the thigh by a pitch from Vince Velasquez. LeMahieu played six innings at second base.

“I’m going to push for opening day,” he said. “Physically feel really good. A couple of good at-bats, so just keep it rolling."

Boone says he has an open mind: “I'd say he's a possibility.”

“There's a good chance that's what it could look like opening day,” Boone said.

Left-hander James Paxton threw 84 pitches over five innings in a simulated game and is expected to pitch the second game of the season at Washington on Saturday, two days after Gerrit Cole starts the opener.

Left-handers J.A. Happ and Jordan Montgomery also figure to be part of the initial rotation, likely to be joined the second turn through by right-hander Masahiro Tanaka after he builds up in his return from getting hit in the head by a line drive July 4.

Tanaka is to throw batting practice on Tuesday and throw again on Sunday. That would line him up to start a series opener against Boston on July 31.

Miguel Andújar walked as a pinch hitter in the sixth and went to first base. Limited to 12 games last year because of a shoulder injury that required surgery, he lost his third base job to Urshela.

Andújar also has played first base during the exhibition season.

“I enjoyed playing first base today," he said, but added his preference was the outfield because he has had more time there.

Mike Ford hit a tying home run as a pinch hitter in the ninth off right-hander Mauricio Llovera. The 28-year-old Ford debuted in April 2019, had a two-homer game against Seattle on Aug. 26 and a walk-off homer off Oakland's Liam Hendriks last Sept. 1.

“I see a role,” Boone said. “He controls the zone as well as you can and has power. He's a really good hitter and I think a really good middle-of-the-order major league hitter. That's how I view him. I think he's that good offensively."

“For us, it's a left-handed look, obviously, which we're a little bit right-handed heavy,” Boone said. "So there's going to be days where you got a tough righty on the mound that's maybe tough especially on some right-handed hitters, where he's going to see some time there just because another lefty bat that can split up our right hitters a little bit. But he's the real deal in the box.”