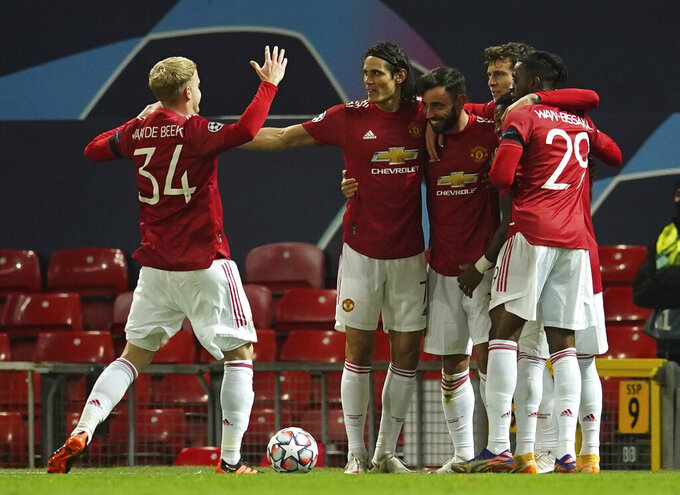 Talking points ahead of the penultimate round of group-stage games in the Champions League:

A victory for Zinedine Zidane’s Real Madrid at Shakhtar Donetsk will prevent qualification for the knockout stage going down to the final game. Zidane is under increasing pressure to get his team playing like the one that won the Spanish league last season, when it dominated after competition resumed following a long stoppage because of the COVID-19 pandemic. The record 13-time European champion has only one win in its last four matches across all competitions — a 2-0 victory at Inter Milan in the Champions League last week. Madrid lost 2-1 to Alavés in the Spanish league on Saturday. Eden Hazard has been left off the squad after he was substituted in the first half against Alavés for an apparent leg injury. Shakhtar had an upset 3-2 win over Madrid in Spain in their first Group B encounter. Also on Tuesday, Atlético Madrid hosts defending champion Bayern Munich, with the German lineup already in the last-16 as winners of Group A. Bayern routed Atlético 4-0 in Germany. Diego Simeone’s team will advance if it beats Bayern and Lokomotiv does not beat Salzburg.

— By Joseph Wilson in Barcelona, Spain.

Chelsea and Manchester City are already through to the knockout phase with two games to spare. Now it's the turn of Manchester United and Liverpool off the back of a challenging weekend in the Premier League. Liverpool on Tuesday hosts Ajax, with a two-point advantage on the Dutch club in Group D, with a packed program, fixture scheduling and James Milner adding to the injury headaches. The 2019 European champions were stunned at home last week with a home loss to Atalanta. The visit of Ajax comes a day too soon for the return of up to 2,000 fans being allowed at Anfield. Old Trafford will still be shut to supporters despite United hosting Paris Saint-Germain on Wednesday when the national lockdown ends, with Manchester remaining in the highest classification of coronavirus restrictions. United came from two goals down to beat Southampton on Sunday. It has a three-point lead in Group H over PSG, last season's finalist which Ole Gunnar Solskjaer's side beat in Paris.

— By Rob Harris in London.

Marseille’s Champions League form has been so bad it has set a record with 13 straight defeats in the competition, and has not even scored in four group games so far this tournament. Yet the European campaign can still be salvaged if Marseille beats Olympiakos at Stade Velodrome on Tuesday to move level with the Greek club as they chase a Europa League spot. Coach Andre Villas-Boas can feel cautiously optimistic given that Marseille’s forward line finally clicked, with France internationals Florian Thauvin and Dimitri Payet scoring on Saturday. Thauvin has easily been the club’s most consistent player this season and last. What Villas-Boas really needs is for the gifted Payet to rediscover the magical touch that saw him shine at the European Championship four years ago.

— By Jerome Pugmire in Paris.

Juventus will be hoping for a good performance to shake off recent criticism. Coach Andrea Pirlo rested Cristiano Ronaldo on Saturday but, even without its star player, Juventus should have beaten newly promoted Benevento in the Italian league. The nine-time defending Serie A champion was held to a 1-1 draw. Juventus has already qualified for the knockout stage along with Barcelona from Group G and hosts Dynamo Kyiv on Wednesday. Lazio and Atalanta are also looking to the Champions League for joy after disappointing defeats in Serie A. Lazio can book its place in the round of 16 with a win at Borussia Dortmund on Wednesday. Atalanta follows up its Anfield success by hosting Midtjylland, which is last in Group D. Inter Milan won at the weekend though anything but a win at Borussia Mönchengladbach in Group B on Tuesday will consign it to an early Champions League exit.

— By Daniella Matar in Milan.

Bayern is a team sorely in need of a rest. The European champion’s key men have been playing almost non-stop for club and country for months, and it’s starting to show. Saturday’s game against Stuttgart brought a 3-1 win but also four new injuries of varying severity for Jerome Boateng, Corentin Tolisso, Lucas Hernández and Javi Martínez. Coach Hansi Flick could rotate the squad for the Atletico game Tuesday, but that would mean risking Bayern’s 100% record in Group A. Bringing in new faces didn’t work too well against Salzburg last week, when midfielder Marc Roca was red-carded in his first European game for Bayern. Borussia Mönchengladbach can reach the knockout stages for the first time and eliminate Inter Milan when it hosts the Italian team Tuesday. That’s more than many Gladbach fans ever dared to hope for. Leipzig is in a tight struggle with Paris Saint-Germain to qualify from Group H and could gain the advantage Wednesday with a win over Istanbul Basaksehir. All that Borussia Dortmund needs is a point to qualify but Dortmund will be keen to beat Lazio to secure first place, gain revenge for an earlier defeat to the Italians, and also bounce back from a surprise 2-1 loss to Cologne in the Bundesliga.

— By James Ellingworth in Leverkusen, Germany.