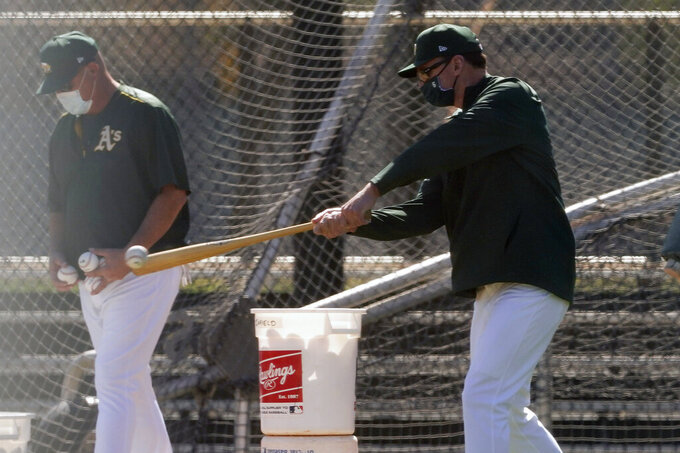 OAKLAND, Calif. (AP) — Matt Chapman watched from the sidelines as the Oakland Athletics won the AL West and finally ended their playoff futility last fall with a postseason series victory for the first time in 14 years.

Oakland desperately missed its slick-fielding third baseman, who went down with a hip injury that required surgery in September. He played in only 37 games during the coronavirus-shortened 60-game schedule.

Now, Chapman is back making plays at third with ease, without thinking — and that's a great feeling after a lengthy rehab.

By beating the White Sox in the wild-card round, Oakland stopped a nine-game losing streak in winner-take-all postseason games — a major league record that dated to the 1973 World Series. The A’s had lost six straight playoff series since sweeping Minnesota in the 2006 Division Series, starting when Detroit swept Oakland in that year’s Championship Series.

With the departures of shortstop Marcus Semien in free agency to Toronto and closer Liam Hendriks joining the White Sox, Oakland took some criticism for being slow to act during the offseason.

Then, general manager David Forst pulled off the acquisition of Elvis Andrus in a trade with Texas that sent slugger Khris Davis to the Rangers. The A's added experienced closer Trevor Rosenthal on an $11 million, one-year contract and landed first baseman and designated hitter Mitch Moreland for $2.25 million and one year.

Hey, that's Jed Lowrie back for more — as in a third stint with the A's with his 37th birthday coming up April 17. His versatility and familiarity is a huge plus, even if Lowrie has been limited by injuries in recent years.

“I haven’t been that excited on a baseball field in a while. Just happy I didn’t pass out, quite frankly,” Lowrie said following his first spring game March 9.

Right-hander Mike Fiers, whose six wins led the club in 2020, re-signed on a $3.5 million, one-year contract.

The 35-year-old Fiers, slowed by a back issue this spring, brings a veteran presence to Oakland's young pitching staff that also includes left-hander Sean Manaea as a key starter.

Fiers was acquired by the A’s in August 2018 and a year later became the whistleblower in the sign-stealing scandal involving his former Houston Astros club when he provided details to The Athletic.

Forst made upgrading the bullpen a priority and joining Rosenthal are fellow veterans Yusmeiro Petit and Sergio Romo, both with proven track records.

Manager Bob Melvin has options with a variety of looks and personalities.

“Certainly the teams that have gone far in the playoffs the last few years have proven that if you can give your opponent a number of different looks out of the bullpen that it has a chance to be really valuable,” Forst said.

Andrus batted just .194 last season while limited to 29 games because of lingering lower back issues, and said he isn’t sure people realized how difficult it was to play through that.

Moreland is the likely candidate to be regular DH. The veteran utilityman batted .265 with 10 home runs and 29 RBIs in 42 games between Boston and San Diego last season.

Puk worked out with fellow southpaw Jesús Luzardo, who opened his south Florida home to Puk so they could train together over the winter.

“Probably about halfway through my rehab and playing catch progression this offseason I just completely forgot that I had shoulder surgery,” Puk said. “I just come to the field every day, play catch like nothing ever happened. That's what I was looking forward to because previously the past year and a half I was a little hesitant coming in knowing it would take a while for it to feel good."

Right-hander Daulton Jefferies, Oakland's first-round pick in 2016 selected 37th overall out of California, could be called upon at some point to make a contribution.