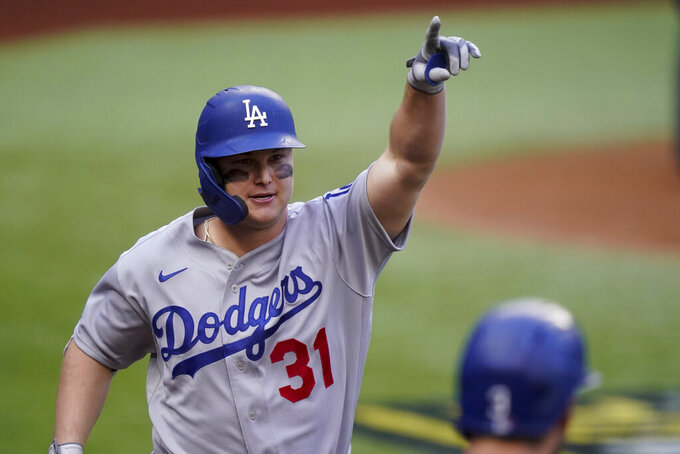 Chicago had just three outfielders on its 40-man roster before the addition of Pederson, who hit .190 with seven homers and 16 RBIs last season for the World Series champion Los Angeles Dodgers.

The Cubs let Kyle Schwarber go in December, and he signed a $10 million, one-year contract with Washington on Jan. 9. Pederson, another lefty bat with lots of power and some limitations at the plate, likely steps in for Schwarber in left.

For Pederson, who turns 29 in April, it's a chance for regular playing time before possibly trying free agency again next year.

Pederson was selected by Los Angeles in the 11th round of the 2010 amateur draft and spent his first seven seasons with the Dodgers. He is a .230 hitter with 130 homers and 303 RBIs in 748 career games.

While Pederson struggled during the pandemic-shortened season, he set career highs with 36 homers, 74 RBIs and a .249 batting average in 149 games in 2019.

Pederson also appeared in 64 playoff games with Los Angeles, including three World Series. He hit .382 with two homers and eight RBIs during the 2020 postseason, helping the Dodgers win the championship for the first time since 1988. He earned $2,870,370 in prorated pay from a $7.75 million salary.

Chicago’s rotation will have a different look next season after it traded Yu Darvish to San Diego in December and Jon Lester departed in free agency. Williams could compete for one of the last two spots behind Kyle Hendricks, Zach Davies and Alec Mills.

The Cubs also claimed infielder Sergio Alcántara off waivers from the Tigers and designated infielder Max Schrock for assignment .

The 24-year-old Alcántara debuted with Detroit last season and appeared in 10 games. He hit .143 (3 for 21) with a home run, and saw time at second and third base. The Tigers designated him for assignment last week.