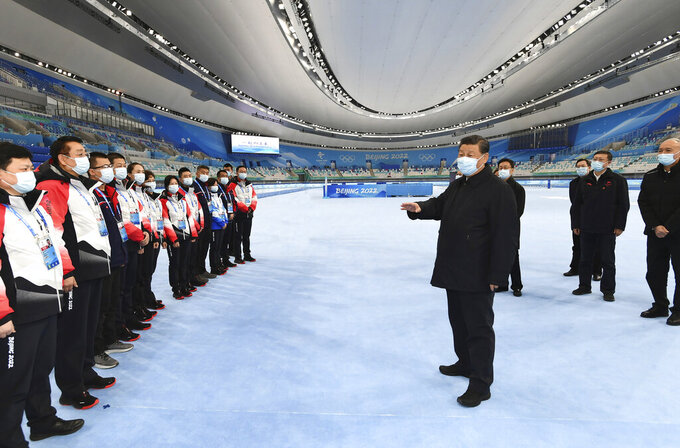 In this photo released by China's Xinhua News Agency, Chinese President Xi Jinping tours the National Speed Skating Oval, a competition venue for the 2022 Winter Olympics, in Beijing, Tuesday, Jan. 4, 2022. Competition for the Winter Olympics is scheduled to begin on Feb. 4. (Xie Huanchi/Xinhua via AP)

GENEVA (AP) — The finance model for the Winter Olympics calls for the host country to spend several billion dollars, the IOC to earn a couple billion, and sports bodies to share around hundreds of millions.

Fortunately for China, turning a profit from the 2022 Beijing Games was not a priority even before the coronavirus pandemic wiped out some expected sources of income.

Chinese President Xi Jinping set a goal in 2015 to create a new tourism industry in the country.

“It will inspire over 300 million Chinese to participate in winter sports if we win, which will contribute greatly to the development of the international Olympic cause,” Xi said back then, according to China's official Xinhua news agency.

The buildup to the Olympics, which open on Feb. 4 and close 16 days later, has brought high-speed train lines that will carry athletes to new ski resorts outside Beijing. For the next few decades, those same train lines will be shuttling Chinese tourists to the mountains.

Russia reportedly spent $51 billion on the 2014 Sochi Games, a price tag that is expected to stand as an Olympic record for many years. That huge amount made European voters nervous about hosting in the future and led the IOC to review how Games are awarded and organized.

But China’s motivation, like Russia in 2014, is a state-backed plan to create domestic leisure and tourism sectors with the big-ticket item again being a city-to-mountains transport system.

China allocated more than $9 billion for a high-speed rail linking Beijing to nearby ski resorts in Zhangjiakou and Yangqing, where ski slopes have been carved out of mountains that get little natural snow.

The budget for Olympic-specific operations to host the Games is expected to be about $4 billion. Venues built in Beijing for the 2008 Summer Olympics have been repurposed. The Water Cube for swimming is now the Ice Cube for curling.

Still, the overall investment on winter sports has been significant since Beijing won its Olympic bid seven years ago.

China now has more than 650 ice rinks and 800 ski resorts, China Daily reported this month, citing the National Winter Sports Administrative Center. Those numbers mark rises of 317% and 41%, respectively, since 2015.

China would have expected modest revenue from relatively few international visitors for the Winter Games even before the pandemic made their trips impossible.

Tickets also aren't being sold to residents of China, taking another of the host’s income streams. The IOC’s own figures show the highest Winter Games ticketing revenue was $250 million at the 2010 Vancouver Olympics, which sold 1.5 million tickets.

The Beijing organizing committee’s website currently lists 44 commercial partners, nearly all Chinese, in four tiers that include suppliers of goods and services. The 11 top-tier “partners” include Air China and Bank of China.

Sales of merchandizing such as gloves and mascots, worth $79 million to Pyeongchang in 2018, also top up local organizers’ income.

Still, the most important number has at least officially already been reached. The National Bureau of Statistics said this month the target of engaging 300 million people in winter sports had been hit.

The IOC gets billions of dollars from broadcasters around the world and from sponsors who get exclusive global rights.

Beijing is the first of American broadcaster NBC’s $7.75 billion, six-Olympics deal through 2032. It was said when signed eight years ago to be worth a combined $2.5 billion for the 2022 Beijing Games and the 2024 Paris Olympics.

The Summer Olympics bring in about twice as much as the Winter Games.

The IOC now has 13 top-tier sponsors, including Chinese companies Alibaba and Mengniu, which is in the soft drinks category along with Coca-Cola. It was 11 for Sochi and Rio de Janeiro when their combined value was $1 billion in cash and services in 2014 and 2016.

The so-called TOP program is set to be worth about $3 billion for 2021-24, IOC president Thomas Bach told members last March. It was unclear if that reflected Tokyo being pushed back as host into 2021.

The IOC is giving $880 million toward Beijing organizers’ costs. That’s only a few million less than Pyeongchang organizers got four years ago.

Another $215 million was distributed among national Olympic committees. Of the 206 NOCs, 92 competed in Pyeongchang.

The 2,900 athletes at the Beijing Olympics do not get prize money from the IOC for competing or winning medals. Some of what the IOC pays sports bodies can trickle down to athletes, however.

The IOC will put $590 million into the Olympic Solidarity fund for the 2021-24 period. That will give grants to train athletes, coaches and administrators. Less wealthy countries are prioritized.

The IOC said 420 athletes from 78 teams were awarded scholarships to help qualify and prepare for this year's Olympics. The program had a $10 million budget for the 2018 edition.

In some countries, Olympic medalists get cash or gifts from sports bodies and governments.

Russia has a tradition of wealthy supporters rewarding Olympic success. Gold medalists at the Sochi Olympics were given $120,000 and an SUV.