Chris Paul, on upcoming NBA season: 'Nothing is perfect' 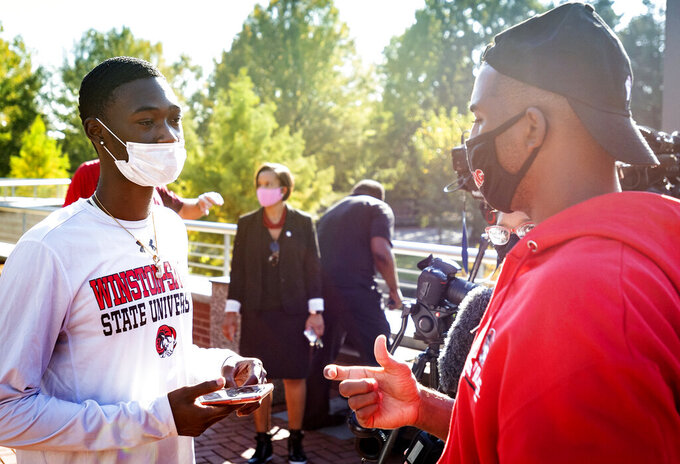 Chris Paul fully understands that these are imperfect times. And that means perfect solutions for issues that the NBA and its players are dealing with, he said, aren’t likely to be found.

Paul, the president of the National Basketball Players Association and guard for the Oklahoma City Thunder, spoke Thursday at a Time100 event and said the league and the union are continuing to work through countless details that have to be settled before the new season begins with training camps next month and the start of games on Dec. 22.

The money issues are largely settled, with the league and the union striking a deal on escrow earlier this week and a decision being made to keep the salary cap for 2020-21 — which could have fallen substantially because of a massive hit to the planned revenues for last season — at the 2019-20 levels. But issues on health and safety and how to try to keep people safe without a bubble during a coronavirus pandemic are still being worked out, and Paul acknowledged that he isn’t sure “what this season is going to look like yet.”

“There’s still a lot of questions that have to be answered,” Paul said. “But we’re working on it. Nothing is perfect and everything that you see ... we’re sort of learning everything on the fly. The only thing that’s in control right now is that virus. We’re working hard to try to make sure that not only our players are happy but our fans are happy.”

Positive test rates are soaring in many parts of the country, and the Los Angeles Lakers said Wednesday that they will begin play this season with no fans in the seats at Staples Center. The Thunder, Paul’s team, have released a plan for reduced seating in their building, and it remains unclear how many teams will have fans — and how many seats will be sold in any arena.

“None of the things that everyone is dealing with right now is ideal,” Paul said. “Nothing. I think about us and we get an opportunity to play this game, right? But I also think about my kids who are doing online school day in and day out. So, the decisions that we’re making ... we’re blessed to be in the situation that we’re in. Like I said, things aren’t ideal, but we’re trying to make them work.”

Paul also was asked about reports of possible trades involving him, but said little that would provide insight on where he may play next season — or if he expects to be traded. He’s owed about $41 million for this coming season and holds a $44 million player option for next season.

“Man, I’m 35 years old and I still get a chance to play basketball every day and say that’s my way of life,” Paul said. “That is crazy in itself so regardless what happens, I’ll be ready.”

The NBA sent teams a memo Thursday informing them that the audit of Basketball Related Income (BRI) for this past season was completed, and that only four teams — Portland, Miami, Oklahoma City and Minnesota — owe a luxury tax.

The four teams that owe a luxury tax got a discounted bill this year because of the reduction in BRI. That revenue stream was greatly impacted by the league suspending play on March 11 because of the virus and then resuming the season in front of no fans inside the Walt Disney World bubble for 88 regular-season games and the entire postseason.

But technically, none of those four teams will “pay" the tax bill, the league said. All NBA teams are due to receive an escrow payment of about $12 million on Dec. 1; the league said “to simplify cash flow, each taxpaying team’s tax payment will be netted against the team’s escrow distribution." So, for the Blazers, Heat, Thunder and Timberwolves, the tax owed will simply be deducted from their escrow payment.

The San Antonio Spurs say they were promoting assistant coach Mitch Johnson to the role vacated by Tim Duncan, the Spurs great who spent this past season as an assistant under coach Gregg Popovich.

The Spurs also promoted Darius Songaila to assistant coach. Songalia had been a player development coach for the team last season.