Citi Field, other sites open for vaccines, but will it help? 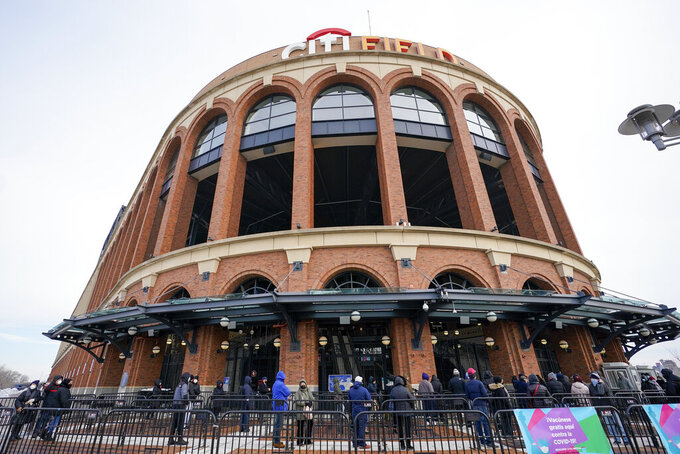 People line up at a COVID-19 vaccination site at CitiField, Wednesday, Feb. 10, 2021, in in the Queens borough of New York. (AP Photo/Mary Altaffer)

NEW YORK (AP) — New coronavirus vaccination sites continue to open up in New York City, but with shots still scarce, it remains unclear whether adding more clinics will give more than a token boost to the number of people being inoculated.

But a lack of supply means only a few hundred people a day will initially be able to get shots at the ballpark.

The Citi Field hub will be reserved for taxi drivers, food service workers and other vaccine-eligible residents of the borough of Queens, including “essential workers who have given their all to us during this crisis,” Mayor Bill de Blasio said after touring the site.

Shortly after the first vaccinations were given out at Citi Field, Gov. Andrew Cuomo and White House officials announced they would be opening two more vaccination sites in Brooklyn and Queens on Feb. 24 in hopes of expanding access to vulnerable minority communities.

Cuomo said the state hopes to vaccinate as many as 3,000 people a day at each site with doses from a “special federal allocation.”

If the state hits that target without having to drain shots from elsewhere, it would be a welcome increase in vaccination capacity. In recent days, all vaccination sites run by New York City, combined, have only been totaling about 31,000 shots per day.

But it raised the question of why the federal government and the state were opening new sites, rather than simply distributing more doses to existing programs forced to operate below capacity because of insufficient vaccine supplies.

De Blasio said he thought the state's planned sites, at Medgar Evers College in Brooklyn and York College in Queens, were “fantastic," especially because both were part of an effort to boost vaccinations among Black New Yorkers, who have gotten the shots at much lower rates that whites.

De Blasio added, though, that he's "trying to get to a simpler approach for the city, where we simply get a direct allotment and we can make the choices about where the need is greatest.”

De Blasio said he hopes to see more vaccine doses shifted to Citi Field so the site can inoculate thousands of people a day, up from the just 250 who he said would be able to get shots on Wednesday.

“By next week we’ll be able to do 4,000 doses a week at this site," said the mayor, who was flanked by team mascots Mr. Met and Mrs. Met. ”But if we had enough vaccine supply, we will be doing 5,000 doses a day here at Citi Field."

Despite the relatively modest start to the effort, de Blasio called opening day for vaccinations at Citi Field “the beginning of something big.”

Riffing on the movie “Field of Dreams,” he added, “When vaccinations are here, people will come here. If you build it, they will come.”