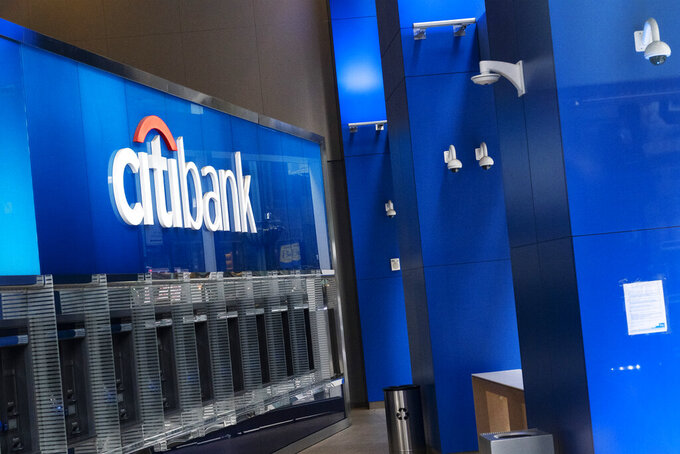 A Citibank office is open, Wednesday, Jan. 13, 2021 in New York. The nation’s largest banks are expected to report big profits for the first quarter, Tuesday, April 13, amid renewed confidence that pandemic-battered consumers and businesses can repay their debts and start borrowing again (AP Photo/Mark Lennihan)

NEW YORK (AP) — Citigroup's profits more than tripled in the first quarter, the banking conglomerate said Thursday, helped by the release of billions of dollars from its loan-loss reserves. The bank also announced plans to scale back its global consumer banking franchise outside the U.S.

The New York-based company said it earned a profit of $7.94 billion, or $3.62 per share, compared to a profit of $2.54 billion, or $1.06 a share, in the same period a year earlier. The bank's profits were well above the $2.60 per share that analysts had been looking for, according to FactSet.

Like its major Wall Street competitors, Citigroup was able to release billions from its loan-loss reserves this quarter, which directly benefited its bottom line. The big banks collectively set aside tens of billions of dollars a year ago to cover the potential losses they might incur as the economy nosedived in the early months of the pandemic. Now that the economy is recovering, banks are able to release those funds.

Citi had a $3.85 billion one-time gain from releasing its loan-loss reserve, which the bank said “reflects the improving economic outlook.”

Citigroup saw lower revenue and interest income in its global banking division, as its customers more aggressively paid down their debts in the past year during the pandemic. Citi has a substantial credit card business that leans toward “revolving” customers — those who keep a steady balance on their cards — and a significant chunk of Americans used their government stimulus payments to pay down debt. Revenues from credit cards fell 18% from a year ago.

Citi's investment banking division had a strong quarter, albeit not as strong as its competition at JPMorgan Chase and Goldman Sachs. Revenues across the division were up 5%, helped by a jump in revenues from its stock trading department.

Part of that revenue gain in the investment bank came from the growing interest in SPACs, or special purpose acquisition companies, which have become a popular way for companies to go public. Citi has underwritten several SPAC initial public offerings.

In a separate announcement, the bank said it would be slimming down its global consumer banking franchise to focus on four geographic markets: Singapore, Hong Kong, the United Arab Emirates and London. The change does not impact the company's U.S. consumer banking operations.

Citi has historically had a large consumer banking presence outside the U.S., but it tends to dabble in markets instead of dominating in them. The scaling back is partly to give Citi leverage and focus in the markets it says it sees as best for future growth.