Clashes with police after 'unlawful' street party in London 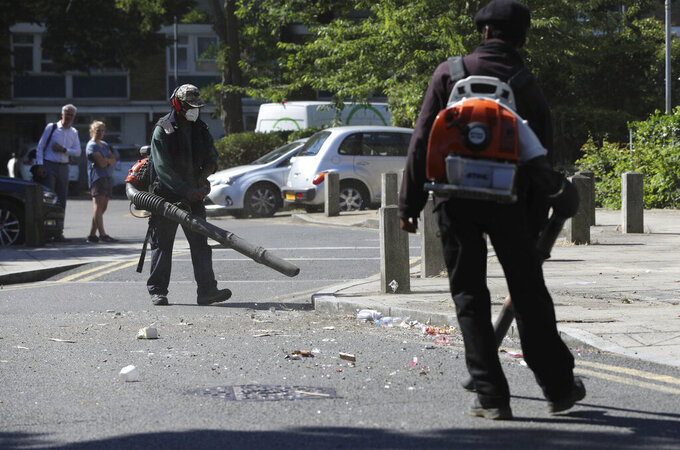 LONDON (AP) — At least 22 police officers were slightly injured after a street party in the south London district of Brixton that violated coronavirus lockdown restrictions descended into violence.

In a statement Thursday, the Metropolitan Police said they were called overnight to “a large unlicensed music event in the street” and that officers unsuccessfully sought to encourage the crowd to leave.

As a result, it said, more police officers arrived and the revellers started turning "hostile." Footage on social media showed that a number of police vehicles were smashed and bottles thrown at officers. Police said none of the officers suffered serious injury but that two required hospital treatment.

Police said four people were arrested for assault and public order offenses and they remain in police custody.

Home Secretary Priti Patel described the images as “utterly vile scenes” and said she would be speaking to the Metropolitan Police's top police officer, Cressida Dick.

"Last night we received numerous concerns from residents complaining about a large gathering, noise, anti-social behaviour and violence, and officers responded to those concerns," he said. “These gatherings are unlawful, as well as posing a risk to public health and against coronavirus restrictions."

Under lockdown restrictions in England, groups are limited to six people but the warm weather over much of the past few weeks has seen far bigger gatherings take place. Wednesday was the hottest day of the year so far in the U.K., with temperatures in the capital hitting more than 32 degrees Celsius (90F).

London Mayor Sadiq Khan said large gatherings during the pandemic are “deeply irresponsible" and are a risk to life.

“I’m in touch with the Met Police about the completely unacceptable events in Brixton overnight," he said. “Violence against the police will not be tolerated.”