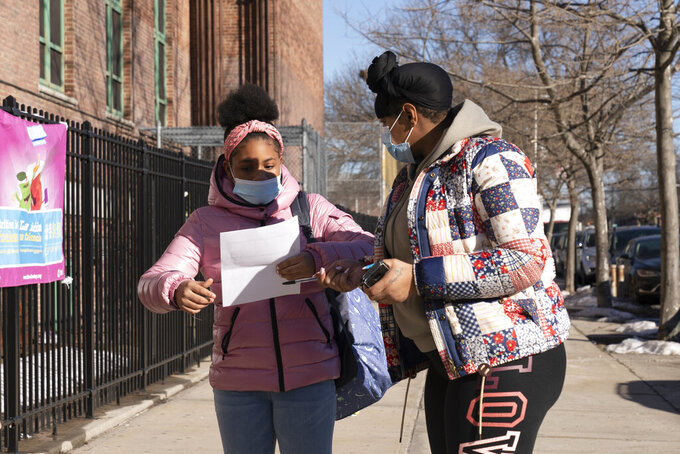 A student checks her paperwork with her mother before entering Meyer Levin Middle School, Thursday, Feb. 25, 2021, in New York. In-school learning resumed for middle school students in New York City for the first time since the fall of 2020. (AP Photo/Mark Lennihan)

NEW YORK (AP) — Tens of thousands of New York City middle school students returned to their school buildings on Thursday for the first time since city schools were closed in November amid a surge in coronavirus infections.

Classroom doors opened for the 62,000 students in grades 6 through 8 whose parents chose a mix of in-person and remote learning for their children. There are about 196,000 students in those grades in the city's public schools.

Mayor Bill de Blasio greeted children returning to school in the Bronx and said later, “it was wonderful to see the energy and the hope and the understanding that this is part of how we move forward.”

He said a teacher told him, “I want to be here. It feels right."

Students receiving in-person instruction in the city are required to wear face coverings at all times, maintain distance from others and submit to random COVID-19 testing. De Blasio said the city has performed 500,000 tests for the virus on students and staff members since the school year started.

The mayor said more than 30,000 city educators have been vaccinated against the virus so far. United Federation of Teachers President Michael Mulgrew, whose union represents more than 120,000 teachers, guidance counselors and other school staff members, said that's not enough.

"Even putting the most positive spin on the city’s numbers, there are tens of thousands of staff who have not yet had access to the vaccine,” Mulgrew said in a statement Wednesday.

Some city elementary school students returned to in-person schooling in December, but upper-grade classrooms have remained closed except for those serving some special-needs students. No date has been set for the reopening of high schools.