Cole — and his dad — looking forward to return of fans 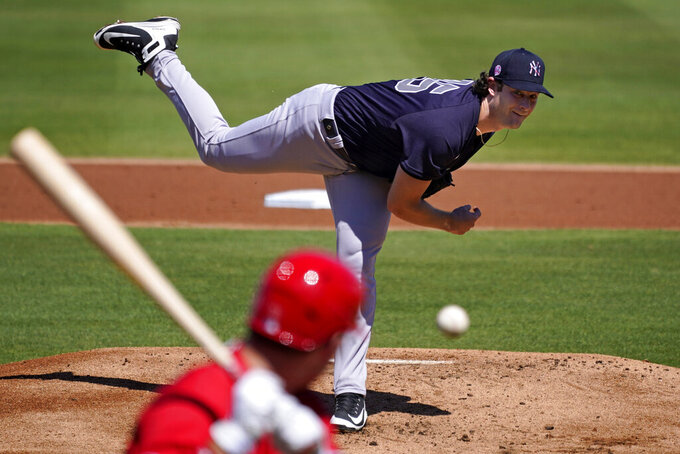 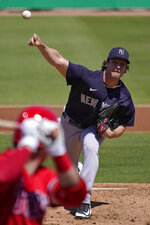 Gerrit Cole is looking forward to having his father at Yankee Stadium on opening day to watch him pitch in person in pinstripes for the first time. —

Mark Cole grew up a Yankees fan in Syracuse, New York, but his son's first season after signing a $324 million, nine-year contract was played in empty ballparks because of the novel coronavirus pandemic.

“My dad’s been itching to get to Yankee Stadium to watch a game,” Cole said Thursday after striking out five over three innings while allowing one run and three hits in a 6-1 win over Philadelphia.

“If they don't let us in for an opening day. I’m going to put the radio on outside the gate and just sit there and listen,” Cole recalled his father telling him.

“I think we could probably get you in,” the pitcher remembered responding. “And then, of course, now it's it for sure it'll be able to happen, and he gets to see it. So he’s excited, and it’ll be honestly easier on everybody's family now that we got some access.”

Aaron Hicks led off the game with a home run off Aaron Nola and added an RBI double in the fifth. Nola gave up two runs and four hits in four innings.

Bryce Harper went 0 for 3 and is hitless in nine at-bats.

Atlanta manager Brian Snitker is a fan of the baseball’s pod scheduling for spring training this year. In fact, he’d like to see the format stick.

The Braves are playing only teams on Florida’s West Coast in spring training. The reduced travel time means the team has had more time at its North Port, Florida facility.

“I’ve loved it, quite honestly,” Snitker said. “I don’t know if it’s a possibility to keep it going. We’ve kind of just changed our routine to just doing all our work here and that’s worked our perfectly.”

Snitker said the Braves’ longest drive for a game has been only about 70 minutes.

“Guys can sleep in a little bit,” he said. “We don’t have to get started quite so early because we can hit into later in the morning.”

New York ace Jacob deGrom reached 102 mph with his fastball while carving up Houston, striking out seven over three perfect innings. The two-time Cy Young Award winner is yet to allow a run in five innings this spring. With a lineup full of minor leaguers, Houston had just one hit and struck out 17 times.

George Springer led off with a home run after missing two games due to left abdominal tightness, and Vladimir Guerrero Jr. hit a three-run homer in the first off Michael Fulmer.

Fulmer gave up seven runs and five hits — three of them homers — and two walks in two innings.

Kody Clemens, the son of former MLB pitcher Roger Clemens, had a two-run triple for Detroit.

Félix Hernández allowing three runs — two earned — and three hits in two innings in his first spring training start of the Orioles. Todd Frazier hit an RBI double in the first and Anthony Alford a two-run homer in the second.

Marwin González hit solo homer in the first off Matt Shoemaker and a three-run drive in the fourth against Devin Smeltzer. Eduardo Rodríguez allowed one run and four hits in four innings with six strikeouts.

Tyler Glasnow struck out seven and allowed one hit in four scoreless innings.

Joc Pederson went 3 for 3 with a pair of home runs off Dereck Rodriguez and is batting .529 with five homers and a 1.471 slugging percentage. Kris Bryant hit a two-run double. Kyle Hendricks struck out five in three innings but gave up four runs and seven hits.

AL Cy Young Award winner Shane Bieber struck out five in three innings and allowed one hit. Bobby Bradley doubled twice and is batting .400 as he tries to earn the Indians first base job. Eric Hosmer hit a two-run homer.

Mike Trout hit his first homer. Griffin Canning retired the side in the first on 12 pitches, was relieved in the second after giving up a three-run triple by Will Wilson, then came back and could not retire a batter in the third. Albert Pujols singled and doubled, and Dexter Fowler homered.

Nick Castellanos and Mike Moustakas each homered and had two hits for Cincinnati, and Eugenio Suarez also had two hits. Tyler Mahle pitched two scoreless innings, allowing a hit and striking out three for the Reds. Eloy Jiménez homered and tripled for Chicago, but starter Reynaldo López allowed five runs in three innings.