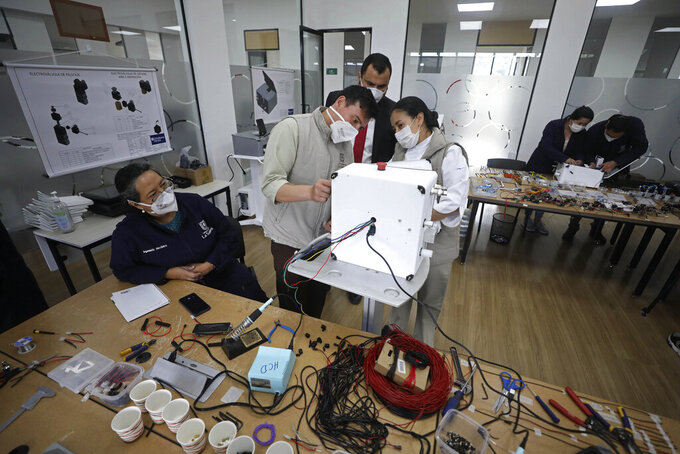 Engineering faculty and workers at La Sabana University work on a low-cost ventilator for patients with COVID-19 in Bogota, Colombia, Monday, July 6, 2020. The machine called the Heron looks like many other ventilators used to treat COVID-19 patients, but this device costs about $4,000, a fifth of the price of ventilators imported from China, and it's made in Colombia, where some hospitals have been overwhelmed by coronavirus patients. (AP Photo/Fernando Vergara)

BOGOTA, Colombia (AP) — The machine called the Heron looks like many other ventilators used to treat COVID-19 patients. There's a screen atop a metallic box that displays the amount of oxygen being pumped into a person's lungs and a plastic tube that delivers it to the patient.

But this device costs about $4,000 — a fifth of the price of ventilators imported from China — and it's made in Colombia, where some hospitals have been overwhelmed by coronavirus patients.

Engineers hope the recently begun emergency deployment of the ventilators could save hundreds of lives and make Colombia a pioneer in low-cost equipment for COVID-19 patients.

“It’s not just the price that’s important” said Julian Echeverry, a mechanical engineering professor at Bogota’s La Sabana University who helped to design the Heron, “but how quickly we can get these machines to hospitals.”

The Herons haven't yet received full approval from Colombian regulators, who insist they must first be tested successfully on at least 100 patients. But a new law allows doctors to use the Herons if their hospital has run out of conventional machines and they have the consent of patients or their relatives.

That situation recently played out at Bogota’s Cardioinfantil Foundation, a private clinic whose 55 intensive-care beds have been fully occupied, or close to that, throughout August.

Dr. Fabio Varon, a pneumologist, said he used the Heron this month on a 50-year-old COVID-19 patient with severe lung damage. The hospital had run out of conventional ventilators when the man was carried into the emergency room.

“With his relatives’ permission, we hooked up the patient (to a Heron) for three days” Varon said. “The ventilator didn’t give us any trouble, and the patient is now recovering.”

Colombia is in a critical stage of the pandemic, with officials recording around 8,000 new cases and 300 deaths each day. The country has reported more than 500,000 cases since the pandemic began, with approximately 3.5% requiring hospitalization in intensive-care units.

President Ivan Duque’s administration has created new intensive-care units and purchased more than 6,300 ventilators since April, mostly from China at a cost of about $22,000 each, according to the Health Ministry.

But less than half of those ventilators have arrived and been installed in hospitals, the ministry says, even as the number of people needing them climbs.

In the capital city of Bogota, ICU units are currently 77% full according to the municipal government. In remote regions with fewer hospital beds, the situation is more difficult. ICU occupancy reached 100% in July and August in the jungle states of Choco and Caqueta, forcing hospitals there to fly patients with severe lung damage to faraway cities.

As in other nations facing similar problems, that has set off a race to build local ventilators that are reliable, cost-efficient and can be quickly produced.

The University of La Sabana started work on the Heron in April, with professors from its engineering and medical schools leading the project.

After testing a pilot version on pigs, the university started mass production in July with the help of Challenger, a company that makes washing machines and televisions.

They have built more than 200 ventilators, with a total of 50 units sent to hospitals in Bogota, Choco and the eastern state of Arauca.

Monica Murcia, a projects coordinator at the Colombia Solidaria Foundation, said several local companies have pledged funds to produce 600 more ventilators once they are approved by regulators.

The University of Antioquia, meanwhile, designed a similar low-cost ventilator with the help of a medical supplies company and shipped more than 90 units to hospitals in Medellin, Cartagena and the border state of Norte de Santander. Those are being assembled by a company that makes dishwashers.

Luis Alfredo Paipa an industrial engineering professor at the University of La Sabana, said the Heron is cheaper to produce than most commercial ventilators because of its more basic design.

Like ventilators built in the 1960s, the Heron uses round dials connected to electronic circuit boards that regulate the amount and frequency of oxygen pumped into patients' lungs. La Sabana says it cut down on costs by not having to invest in developing new software for its ventilators.

“It’s like using a Renault 4 instead of a BMW,” Paipa said, pointing at four plastic dials on the Heron that are used to control oxygen levels. “Both can drive you around. But one relies on mechanical features while the other runs on a computer.”

The low-cost ventilators also have fewer respiratory modes than conventional machines, said Dr Luis Fernando Giraldo, a pneumologist who was involved in the Heron’s design. For example, it lacks the ability to perform pressure-controlled ventilation.

While the ventilators undergo clinical trials, the university is sending more of them to small towns in Colombia . Engineers are also testing how the ventilator performs at different altitudes, with different atmospheric pressures. Colombia's capital is at an elevation of more than 8,600 feet (2,600 meters), while other sizable cities are at sea level.

“We need to be prepared” Echeverry said. “These days it has become quite difficult to import ventilators.”