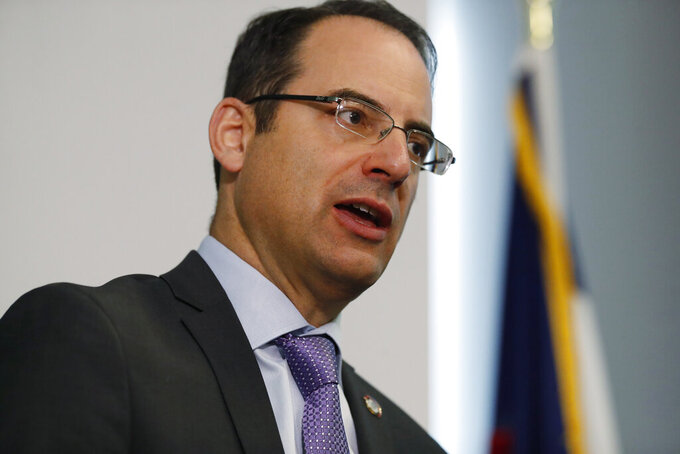 DENVER (AP) — Colorado Attorney General Phil Weiser and the state Department of Labor and Employment announced Thursday a statewide campaign to identify and prosecute persons responsible for an estimated 1 million-plus fraudulent claims for unemployment benefits filed during the coronavirus pandemic.

Weiser said the effort will involve his office, the labor department, the Colorado Bureau of Investigation and district attorneys across the state. Both he and labor department officials urged residents to take steps to protect themselves against a nationwide surge of identity theft that is being used to file the bogus claims and to promptly report identity theft to state and local authorities.

“The risk of identity theft is severe and can affect all of us,” Weiser told reporters during a remote briefing.

The state estimates it has prevented more than 1.1 million bogus claims for unemployment from being paid out and stopped more than $7 billion in fraudulent benefits during the pandemic, said Joe Barela, executive director of the labor department. State officials have substantially beefed up resources to detect and investigate fraud, including the use of automated software, and have recaptured $1 million of an estimated $6.5 million in fraudulent payments during the pandemic, Barela said. Those efforts are ongoing.

Anyone who is or suspects they are victim of fraud — including employers notified by the labor department that a benefits claim has been filed in the name of an active employee — can most efficiently report it by filling out and submitting a report at coloradoui.gov. That will trigger an immediate hold and investigation of a claim or claims, Barela said.

Fraudulent claims nationwide have victimized millions of people, including legitimate applicants whose payments are put on hold and unsuspecting victims of identity fraud. Scammers use stolen personal information such as Social Security numbers or birthdays to apply for unemployment benefits. Weiser cited the proliferation of data breaches in recent years affecting credit agencies and other institutions as just one way that national and international scammers obtain personal information.

Estimates of fraudulent payments in U.S. states include $11 billion in California, the biggest target. Other estimates, according to AP reporting across the states, range from several hundred thousand dollars in smaller states such as Alaska and Wyoming to hundreds of millions in more populous states such as Massachusetts and Ohio.

Residents should keep a close eye on their credit reports for suspect activity, refrain from sharing personal data online whenever possible, and use different passwords for their online accounts, among other measures.

The U.S. Department of Labor warned U.S. states in September about “criminal enterprises and other bad actors deploying advanced technologies, stolen or synthetic identities, and other sophisticated tactics,” according to a memo obtained by Colorado Public Radio news through a public records request.

Fraud networks based outside Colorado will be referred to federal prosecutors through the U.S. Attorney’s Office. The U.S. Justice Department is investigating unemployment fraud by transnational and domestic criminal organizations, according to Joshua Stueve, a spokesman for the Justice Department’s criminal division.