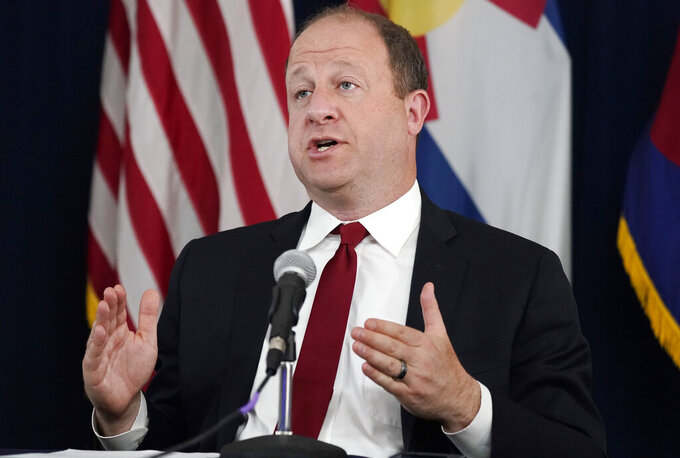 Colorado Governor Jared Polis makes a point during a news conference on the state's response to the spread of the coronavirus Thursday, May 20, 2021, in Denver. (AP Photo/David Zalubowski)

What was once envisioned as a so-called “public option” to be offered by the state became a plan passed during the just-concluded legislative session that requires premium reductions by 2025 of 15% from plans now offered.

Advocates argued the initiative will expand health care affordability, especially among underserved communities that include minorities and rural residents.

Opponents claimed it could force many physicians and specialists who refuse to participate to abandon the state. Some business groups have said insurers could increase premiums for other plans to cover any losses under the state-supervised plan.

Health care accessibility and affordability have been top priorities for the Democratic governor since his 2018 election.

He and Democrats who control the Legislature have fought to import cheaper prescription drugs from abroad, address inequities in health care exposed by the coronavirus pandemic, provide free reproductive health care to immigrants living in the U.S. illegally, cap insulin prices and bolster mental health care, among many other initiatives.

At a Tuesday forum about the recently concluded legislative session attended by Polis, Kelly Brough, CEO of the Denver Metro Chamber of Commerce, took Democrats to task over the health insurance bill, Colorado Public Radio reported.

Brough said she believed the plan could save individuals money but also could increase prices for those who get insurance through large employers.

“Many of our lawmakers know this,” Brough said. “For many of them, it was more important to create the perception that the problem was being solved than to rather, actually solve this problem.”