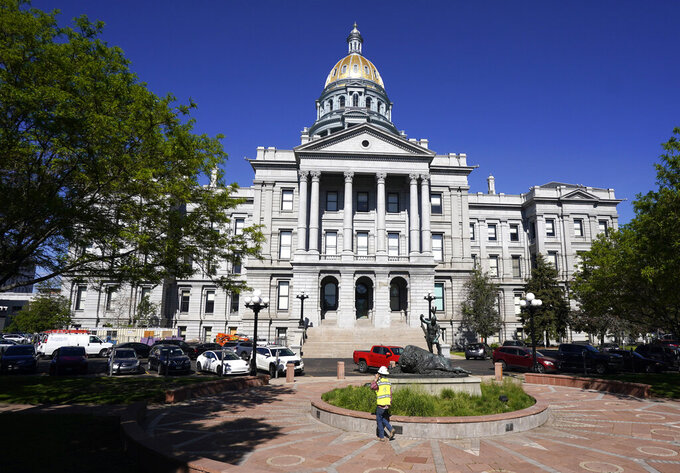 FILE - In this Friday, May 28, 2021, file photo, the morning sun shines on the State Capitol shines in downtown Denver. The Colorado Legislature ended its 2021 session this week after the Democrat-controlled Legislature pushed through a swath of progressive legislation on their agenda with little Republican support, following the aftermath of the coronavirus pandemic, multiple mass shootings in the state and a nationwide reckoning for racial justice. (AP Photo/David Zalubowski, File)

DENVER (AP) — Colorado’s Legislature during its 2021 session launched an ambitious path to recovery from the coronavirus pandemic's devastating economic and social consequences, with majority Democrats doling out millions of dollars to dozens of business and health care needs.

A transportation funding plan that eluded lawmakers for years was approved, as were measures addressing racial disparities in health care and criminal justice.

Lawmakers also followed up on a sweeping 2020 police accountability bill that was passed during protests over the killing of George Floyd.

Republicans fought in vain against a hastily-prepared, last-minute bill that, in part, requires rural electric cooperatives — and power providers including larger utilities — to prepare clean energy plans for the state.

It also directs the Air Quality Control Commission, a panel appointed by the governor, to create fees on greenhouse gas emissions and regulate emissions sources that directly affect lower income and communities of color.

Lawmaker after lawmaker railed against having to vote on legislation many hadn’t seen and that had been modified after a threatened veto by Democratic Gov. Jared Polis, who prefers market-based solutions to achieve Colorado’s carbon emissions goals.

McKean’s Senate counterparts warned that the legislation would punish thousands of Colorado residents, especially in rural areas, who are employed by the state’s multibillion-dollar oil and gas industry.

“What about my justice? What about my family? If the continual drumbeat from Denver is to put me out of business, how can you possibly say I don’t get justice as well?” Republican Sen. Ray Scott of Mesa County recounted a field worker as telling him about the bill.

“Our health is not expendable. We deserve access to clean air, clean water, just like every other community,” countered Democratic Sen. Dominick Moreno, whose Commerce City constituents live next to an oil refinery that’s been cited for air and water emissions. “This gives us a seat at the table.”

They also created a state Office of Gun Violence Prevention aimed at educating residents about gun safety while collecting data about gun violence in the state. Opponents said the office would amount to a state government gun-control agency.

Democrats also passed the nation’s first state restrictions on the use of the sedative ketamine by law enforcement and first responders. Ketamine has been blamed for contributing to the 2019 death of Elijah McClain, a Black man, hustled to the ground by police after someone reporting a “suspicious” person.

Another bill to reduce jail populations and limit arrests for lower-level offenses that primarily affect persons of color failed.

“The purpose of this bill was to heal and reset the relationship between law enforcement and the community — ending the dangerous practices that have both criminalized poverty and taken innocent lives,” lamented Democratic Sen. Pete Lee, a sponsor of the bill.

What was once envisioned as a so-called “public option” to be offered by the state became a plan to require insurers to offer a standard health plan to individuals and small businesses — and sanction hospitals and other health care providers that don’t participate.

The bill requires insurers to offer a to-be-developed standard health plan that could affect about 15% of Colorado’s health insurance market by 2025. It requires gradual premium reductions of 15% from plans now offered. And it would give the state insurance commissioner power to fine hospitals and health care providers.

Advocates argued the bill will expand health care affordability, especially among underserved communities that include minorities and rural residents. Opponents said it could force many physicians and specialists who refuse to participate to leave the state.

Lawmakers from both parties contend that an $800 million state stimulus package passed this year and $3.8 billion in federal pandemic relief will have far-reaching impacts in future years. A bipartisan legislative task force will study how to invest the coming pandemic relief funds in housing, behavioral health and job creation over the summer.

“This was an ambitious and historic session,” House Speaker Alec Garnett tweeted Wednesday. “From the start, we were clear about our priorities and we delivered on our promises.”