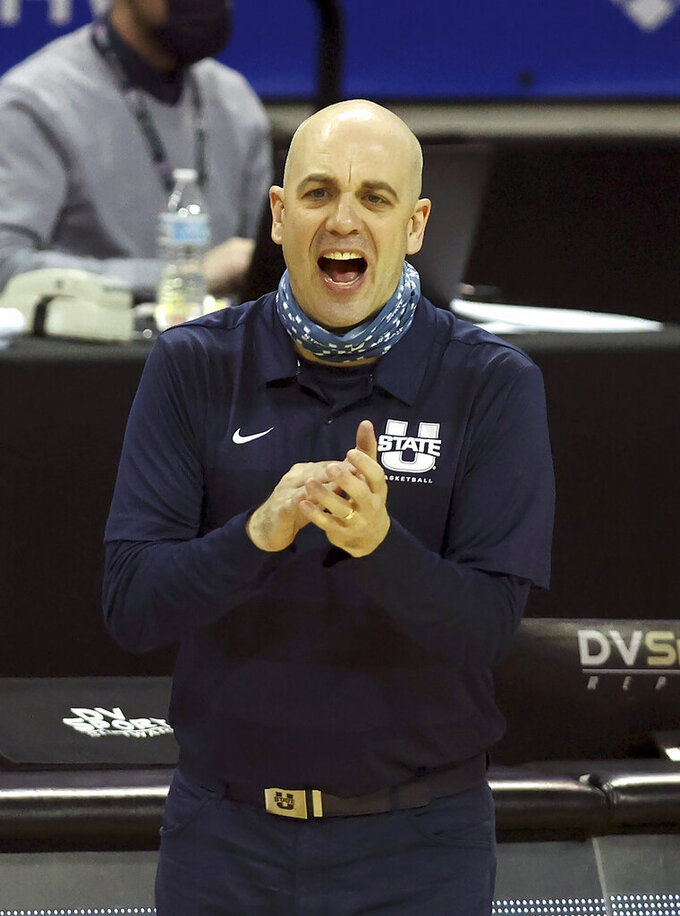 Utah State head coach Craig Smith reacts to a basket during the second half of an NCAA college basketball game against Colorado State in the semifinal round of the Mountain West Conference men's tournament Friday, March 12, 2021, in Las Vegas. (AP Photo/Isaac Brekken) 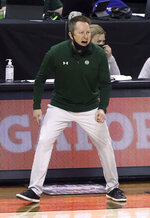 Colorado State was oh-so-close to an at-large berth in the NCAA Tournament before its bubble burst.

The Rams had to settle for top dog in the National Invitation Tournament, and head coach Niko Medved expects the disappointment won't last long.

“This is a dream of all of us. It’s hard, man. It’s hard," Medved said about the snub. "You’re right there. It’s OK to feel that. That’s part of being alive. That’s part of putting yourself out there. That’s OK. They’ll start to quickly move on. Young people are resilient.”

Colorado State (18-6) lost to Utah State in the Mountain West Conference Tournament semifinals and Utah State made the field of 68 instead. Even a victory over regular-season and tournament champion San Diego State wasn't enough for the Rams to make the Big Dance.

“I’ve never been in this situation before," Colorado State junior forward Adam Thistlewood said. "I’m super-excited that we at least get some postseason. As time goes on the next couple of days, we’re going to realize how important this tournament is for us.”

The coronavirus pandemic reduced the field to 16 teams from the usual 32, and all games are set for Frisco and Denton, Texas. That will take the semifinals and championship game out of Madison Square Garden for the first time in the 83-year history of college basketball’s oldest postseason tournament. The NIT champion has been crowned in New York City every year since the tournament started in 1938.

The NCAA ranked the first four teams out of the NCAA Tournament and they were on standby to replace any team from a multi-bid league that has to withdraw because of COVID-19 issues. Louisville, Colorado State, Saint Louis and Ole Miss were the first four out in that order.

The NIT also selected a first four out — Belmont, Furman, Marshall, and UAB.

For Belmont, which plays in the Ohio Valley Conference, it was a bitter moment. The Bruins (26-4) matched top-ranked Gonzaga for the most wins in the nation, but a 15-point loss to Morehead State in the conference tournament title game on Saturday sealed their fate.

“I’m deeply disappointed our players won’t have an opportunity for postseason play,” head coach Casey Alexander said in a statement posted to Twitter. “To think over the last two years together our group had two conference championships, one tournament championship — not to mention 30 consecutive league wins — but no postseason games is a tough pill to swallow.”

“It was just impossible with a field of 16. It limited us tremendously,” she said. “We tried as best we could to make the best decisions to get the most qualified teams in the tournament. I can't tell you exactly why Belmont was not included because we looked at the entire field. We looked at the whole body of work. There's a sense of disappointment that we couldn't include more people. That was out of our hands when the field was cut."

After the NCAA Tournament field was announced, Seton Hall and St. John's of the Big East Conference were not selected and decided to end their seasons. Both finished 10-9 in the conference.

Last year’s cancellation because of COVID-19 was the first in the event’s history. The Texas Longhorns won the most recent NIT in 2019.