COLUMN: Bristol avoided the mess most feared for a dirt race 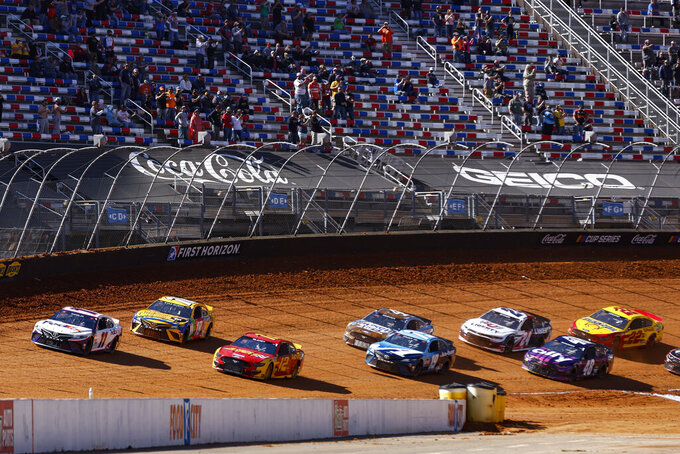 BRISTOL, Tenn. (AP) — The pandemic gave NASCAR an overdue opportunity to break from the way things had always been done in the sport.

The traditional three-day race weekend was scrapped as NASCAR scrambled to complete a season while following COVID-19 protocols. Practice was scrapped and few complained, the same for qualifying.

When the compacted one-day show helped NASCAR cruise through its schedule, a hotline opened and all ideas were welcome. A dirt race on the Cup schedule? At Bristol Motor Speedway?

Sure! Let’s give it a whirl!

It sure sounded fun to put the Cup Series on a dirt track for the first time since 1970, but successfully executing such a wild idea seemed fraught with uncertainties.

The risk was worth it to Marcus Smith, the CEO of Bristol Motor Speedway parent company Speedway Motorsports. He told The Associated Press he spent nearly $2 million to transform Bristol’s concrete bullring into a dirt track, and even as the track began to crack, the tires struggled to hold together and the drivers complained of a blinding dust, Smith insisted everything was great.

And when the race finally finished Monday night — a day late because after all the concerns about Cup cars suitability for dirt at Bristol, torrential rains caused a postponement for flooding — everything indeed was just fine.

Sure, the red Tennessee clay turned Bristol into a dustbowl, described best when driver Corey LaJoie declared “visibility was zero out of 2 with the glare.” But nothing bad happened.

NASCAR staved off a rash of blown tires by adding mandatory cautions that also created extra track prep time. Bristol pulled an all-nighter after the Sunday rains to work the dirt so that it wasn’t engine-overheating-inducing mud. And when the dust got really out of control, NASCAR simply changed the rules in the middle of the race and switched to single-file restarts for the first time in probably a decade.

“I know some of our fans and the NASCAR industry isn’t used to seeing what happened during the race with the dust buildup,” said Steve O’Donnell, NASCAR’s chief racing development officer.

“If you experience that situation, to try and go single file to alleviate some of the dust and some of the visibility issues, that’s why we made that move.”

Joey Logano took the checkered flag in a decent overtime finish and fans who had been buzzing about a dirt race for months seemed genuinely satisfied.

That’s a win for Smith and Speedway Motorsports, which reconfigured its oval at Charlotte Motor Speedway into a hybrid “roval” in 2018 for some added juice. The company just pulled off a dirt race at Bristol and for its next act will lease Circuit of the America’s in May to host NASCAR’s first trip to the Austin, Texas road course.

Smith went a step further Tuesday during an appearance on Dale Earnhardt Jr.'s podcast, where he said he's constantly considering ideas for abandoned North Wilkesboro Speedway in North Carolina and has more visions for Bristol.

“I bet you five years from now we will be sitting here and Bristol will have two dirt races," Earnhardt told Smith on “The Dale Jr. Download.”

Smith's response is unheard of in NASCAR racing: “In five years, we need a roof on Bristol.”

Justin Marks, a former driver in his first year of NASCAR team ownership, applauded the Speedway Motorsports effort on Tuesday. It helped that his driver, Daniel Suarez, finished a season-best fourth at Bristol with no previous dirt experience. But Marks is also part of a group in Nashville who later this summer will host an IndyCar race through the downtown streets, so he understands the challenges facing track promoters.

“Everybody has to measure their appetite for risk,” Marks said. “COVID is challenging but we are living in a world where if you are going to have a successful event property, you are going to have to take some risks. You can’t do things the way you’ve always done them anymore and expect it to work out, because people are more fickle than they’ve ever been, they’ve got short attention spans and they’ve got an appetite for new things like never before.

“If motorsport is going to continue to be relevant and grow in popularity, that appetite for risk is going to have to increase.”

Bristol announced over its public address system before the race had even finished that dirt will be back next year. But there’s a lot of issues that must be addressed. The Goodyear tires must be better suited for a dirt track, perhaps the windshields should be removed from the cars, and most drivers called for the event to be moved to night — dirt races, after all, are traditionally run under the lights.

The date on the calendar for years has been problematic because of unpredictable March weather in the Tennessee mountains, and, most important, Bristol on pavement was a beloved race sacrificed for the dirt experiment. Was it a net gain? There are plenty of tracks on the NASCAR schedule that struggle to host compelling racing, and perhaps a dirt event should have gone there instead. Or even to one of the many existing dirt tracks across the country.

It was also a big ask of the race teams to head into a total unknown of a race that counts as much as the Daytona 500 and every other race on the NASCAR schedule. Perhaps the dirt experiment moving forward should be an All-Star race worth nothing but the cash prize and the team pride in preparing a proper dirt car.

NASCAR got lucky Monday in that it staged a decent show, and Smith successfully pulled off another gamble. But if dirt is here to stay, then it’s got to be more than an experiment out of a pandemic-impacted season.