Comedian Tim Brooke-Taylor of The Goodies dies with COVID-19 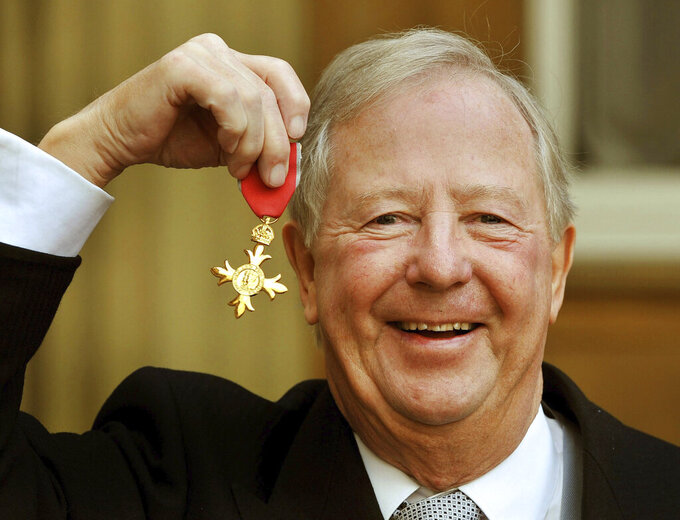 FILE - In this Nov. 28, 2011 file photo, Tim Brooke-Taylor holds his OBE after being presented it by Queen Elizabeth, outside Buckingham Palace in London. British comedian Tim Brooke-Taylor, a member of comedy trio The Goodies, has died after contracting the new coronavirus. He was 79. Brooke-Taylor’s agent says he died Sunday, April 12, 2020 “from COVID-19.”(John Stillwell/PA via AP)

LONDON (AP) — British performer Tim Brooke-Taylor, a member of comedy trio The Goodies, has died after contracting the new coronavirus. He was 79.

Brooke-Taylor was part of Cambridge University’s Footlights revue, the breeding ground of several generations of British comic talent. He broke into radio and television comedy in the 1960s alongside future Monty Python members John Cleese and Graham Chapman.

Brooke-Taylor went on to form The Goodies with Graeme Garden and Bill Oddie. The trio specialized in slightly surreal sketches incorporating visual inventiveness, slapstick and songs. Their song “Funky Gibbon” even became a U.K. top 10 chart hit in 1975.

Their TV show, which ran throughout the 1970s, was a hit in Britain, Australia and New Zealand and developed a cult following in many other countries.

“The Goodies” formed part of a golden era of British television comedy in the 1960s and 70s that included “Monty Python’s Flying Circus” and “Not the Nine O’Clock News.”

For more than 40 years, Brooke-Taylor was also a panelist on BBC radio’s much loved comic quiz show “I’m Sorry I Haven’t a Clue.”

Goodies co-star Garden said Brooke-Taylor was “a funny, sociable, generous man who was a delight to work with. Audiences found him not only hilarious but also adorable.”

“His loss at this dreadful time is particularly hard to bear,” Garden said.

Writer-performer Stephen Fry tweeted: “Just heard the devastating news of the death of Tim Brooke-Taylor. A hero for as long as I can remember, and - on a few golden occasions - a colleague and collaborator on I’m Sorry I Haven’t A Clue. Gentle, kind, funny, wise, warm, but piercingly witty when he chose to be. So sad.”

Brooke-Taylor is survived by his wife, Christine, and two sons.