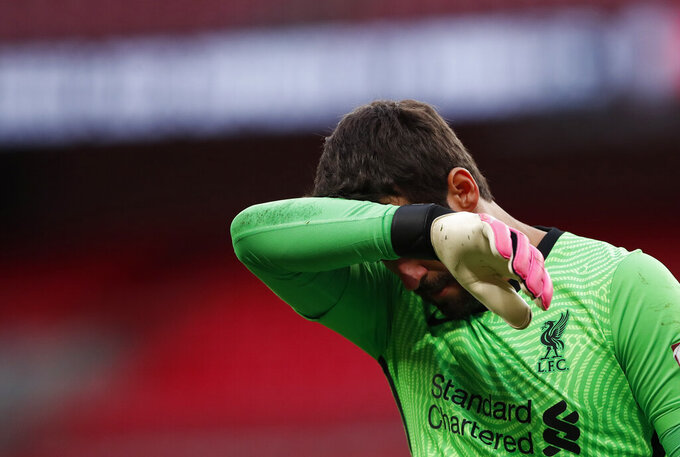 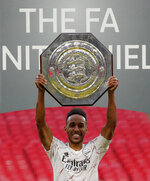 LONDON (AP) — A month that began with Pierre-Emerick Aubameyang winning the FA Cup for Arsenal ended with his goals clinching the Community Shield.

Just like at the start of August for the showpiece that ended the last pandemic-disrupted season, no fans were allowed into Wembley Stadium on Saturday for this curtain-raiser to the new campaign against Liverpool.

Aubameyang is taking to playing in an empty Wembley.

The Arsenal captain scored twice in the both the semifinals and final of the FA Cup. Although his opener in the Community Shield was canceled out by Takumi Minamino's first goal in his 15th game for Liverpool, the striker netted the spotkick that clinched a 5-4 victory over Liverpool in the shootout after the match was 1-1 after 90 minutes. Liverpool striker Rhian Brewster was the only player to fail to score in the shootout.

Now Arsenal is just waiting on Aubameyang signing a new contract as he enters the final season of his current deal.

“We’re going to see in these days," Aubameyang said.

“I am not worried,” Arteta said. “I am very positive he is going to sign."

Aubameyang found the breakthrough in the 12th minute, latching onto Bukayo Saka’s diagonal pass before curling into the net.

The goal celebration was a tribute to actor Chadwick Boseman, who died the previous day of cancer at the age of 43. Aubameyang gave the “Wakanda Forever” salute that has become a symbol to celebrate black excellence since being performed by Boseman's character in the 2018 film, “Black Panther."

Arsenal tweeted an image of Aubameyang folding his arms across his chest with the message: “For Chadwick."

The Premier League season will start a month later than originally scheduled on Sept. 12 — with fans still excluded from stadiums.

Arsenal will be hoping to finish far closer to the champions than last season. Arsenal finished 43 points behind Liverpool but did beat Jürgen Klopp's side after the title had already been sealed in July.

This was a disappointing start to the new season for Liverpool after it became the earliest ever champions when it ended a 30-year title drought.

“We created enough, had the ball quite a lot, but had to be careful of their counterattack, deserved the equalizer, could have scored more, but when you don’t you have to take it," Klopp said. “A penalty shootout is always a little bit of a lottery and we were unlucky there, so congratulations to Arsenal, that is how it is. We respect the competition.”

It was a landmark occasion at Wembley and not just due to the Community Shield being played without fans for the first time.

The men's game was preceded by Chelsea's women adding the Community Shield to the Women's Super League title it won after that season was curtailed due to the coronavirus pandemic.

Chelsea's 2-0 victory over Manchester City was clinched in the second half by Millie Bright’s dipping strike and Erin Cuthbert powering into the net in stoppage time.