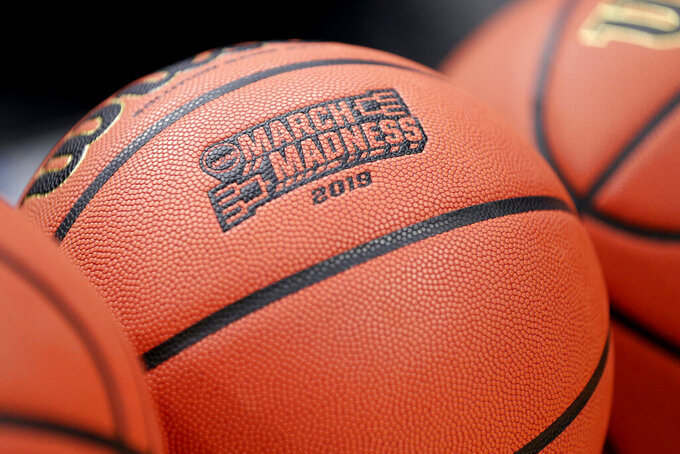 FILE - In this, March 20, 2019, file photo, a basketball with March Madness 2019 logo sits in a rack before Michigan's practice at the NCAA college basketball tournament in Des Moines, Iowa. All 30 college conferences are still planning to hold basketball tournaments where the winner earns the automatic bid to the NCAAs. But the leagues also have until Feb. 26, 2021, to notify the selection committee if there will be any changes to how the automatic bid is awarded. (AP Photo/Nati Harnik, File)

Gonzaga's Mark Few isn't being asked the usual question of where his team should be seeded for next month's NCAA Tournament. The Bulldogs remain unbeaten and have been the top-ranked team all season, making them a virtual shoo-in for a top seed.

Instead, he is being asked if it makes any sense for Gonzaga to compete in its conference tournament given ongoing pandemic concerns.

“I think everybody is kind of waiting to see what’s going to be the best thing for the league moving forward," Few said. “So, we’ll just see how it goes.”

With a little more than four weeks remaining until Selection Sunday, all 30 conferences playing this season are planning to hold tournaments to determine their automatic bids to the 68-team field. The deadline is Feb. 26 for leagues to notify the selection committee if they plan to shift the bid to their regular-season champion.

Few would love to get his team two more games in a tournament setting and help raise the West Coast Conference's profile a couple more notches, but not at the expense of his team missing March Madness due to COVID-19. The NCAA has mandated that teams must have seven straight days of negative tests prior to arriving in Indiana. Players must have an additional two negative PCR tests before starting practice.

“There are some really stringent and strict protocols that we are going to really hit here to get ourselves ready," Few said. "We kind of discovered with our own little COVID-19 experience with all our guys, seven, nine days is kind of that window that if you’re around somebody that is exposed and you can make it past that, you should be good. That’s going to be really tight with the conference tournament.”

Gonzaga's only advantage if it has a positive test is that the WCC final would take place March 9 while most conferences have their finals either March 13 or 14.

Two of the Power Five conferences have moved their tournaments to limit travel. The Big Ten moved its tournament from Chicago to Indianapolis earlier this week. The Atlantic Coast earlier decided to play its games in Greensboro, North Carolina, instead of Washington.

The SEC (Nashville) and Big 12 (Kansas City) are remaining in their current locations. Baylor coach Scott Drew said the Big 12 has told coaches their setup would be like a bubble similar to the NCAA Tournament.

The Pac-12 and West Coast — along with the Mountain West, Western Athletic and Big West — are playing in Las Vegas, with all five conferences discussing the best practices. The Big West had been held in Anaheim, California, since 2001 but moved to Vegas this year to set up a bubble.

Even though most conferences aren't expected to have fans at their games, they would lose more money via television contracts if a tournament had to be scrapped. For some, that would be a second straight season of conference tournament disruptions since the pandemic's onset came in the midst of championship week last year.

Instead of tournaments, some coaches would like to see teams make up postponed games, but it is nearly impossible to make up everything at this point. For example, No. 2 Baylor has had six Big 12 games postponed, including both against West Virginia.

With the unbalanced schedules, the tournaments might also be the only equitable way to ensure all teams in a conference get a shot at making the big dance.

“Given what these kids have already dealt with all season long, do you really want to take that opportunity away? The answer to that is probably not,” Creighton coach Greg McDermott said. “Fortunately, there are people a lot smarter than me that are going to make those decisions. Like usual, I’ll just do what I’m told.”

Duke’s Mike Krzyzewski is in favor of the ACC tournament for two reasons — it is one of the oldest in the country and the automatic bid might be the Blue Devils' only shot to make the field.

“The ACC tournament is such an important thing. I would want that more than making up a game during that time because of how important that is for our conference than a singular game,” he said.

Louisville coach Chris Mack believes some teams will opt out of their conference postseason if they have an NCAA berth secured.

However, Kentucky coach John Calipari said teams opting out this year could have negative effects down the road.

Calipari doesn't hide his disdain for conference tournaments but does see the value in them.

“If the best teams in conferences opt out, the NCAA would probably come back and say your winner is not going to be an automatic bid. And so, why wouldn’t we do it every year, the top four or five teams in our league just say we’re opting out of the tournament so that we get one more team in. So, I don’t think that will be the case," he said. "I think that either we’ll all play or there will be a reason – and the reason would be the safety of the players and the coaches – that we wouldn’t play."