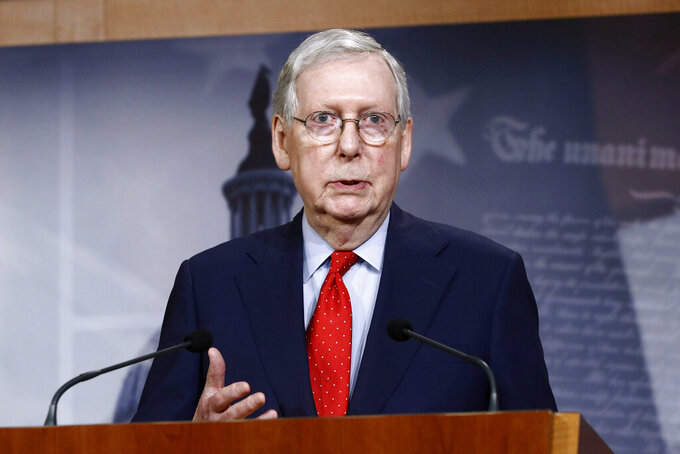 WASHINGTON (AP) — Congress is plunging ahead on a new coronavirus relief package, but deepening partisan divide and uncertainty in the schedule could stall the federal response to the health crisis and deteriorating U.S. economy.

Leaders of both parties announced the House and Senate will return May 4, despite objections from their ranks. Senior lawmakers were told in a briefing by the Capitol physician Monday that they may not be able to convene full House sessions, with staffing, for at least a year amid the ongoing crisis. Negotiations are set to resume Tuesday on proxy voting proposals.

House Speaker Nancy Pelosi said Monday it might be time to consider a “guaranteed income” as 26 million Americans are suddenly jobless. She insists the next bill must provide “heroes” aid to state and local governments to pay police, fire and other front-line workers.

"We may have to think in terms of some different ways to put money in people’s pockets," Pelosi said on MSNBC.

Senate Majority Leader Mitch McConnell countered that his priority is to shield health providers and business owners during the pandemic from what could be “the biggest trial lawyer bonanza in history.” He has suggested changing the laws to let states declare bankruptcy.

While the coronavirus pandemic did the unthinkable in Washington, sparking a rare bipartisanship accord between Democrats and Republicans on the biggest rescue package in history — a $2 trillion effort last month, followed by $500 billion last week — it may not extend to the new effort.

House Majority Leader Steny Hoyer announced on a caucus call with Democrats that the House also would be in session next week.

Questions quickly broke out from lawmakers on the call about the safety of returning to the crowded Capitol complex and reconvening staff amid the pandemic.

While lawmakers say they want to work, many are older and in high-risk categories for contracting the virus. Others care for children and families. Most have to commute from their home states.

Rep. Debbie Wasserman Schultz, D-Fla., warned Democratic colleagues it would be dangerous to return, according to a person who wasn't authorized to discuss the private call Monday and who spoke on condition of anonymity.

Another lawmaker asked if they or their staffs would be tested for the virus, the person said. Answers were uncertain.

The House is weighing options for remote legislating and proxy voting, so lawmakers can keep working while away. A bipartisan House task force is set to meet Tuesday to consider proposals.

Pelosi signaled on Monday's private call that she is prepared to hold a vote to allow proxy voting when Congress returns next week whether or not the talks produce a bipartisan agreement with Republicans, according to an aide unauthorized to discuss it and granted anonymity.

Lawmakers are particularly eager to hold hearings remotely so they can conduct oversight of coronavirus spending and start preparing the next legislative package.

“We must move forward,” wrote members of the New Democrat Coalition, a caucus of House moderates in a letter to party leaders.

In the Senate, McConnell has said his top priority remains confirming President Donald Trump's judicial nominees to the courts.

“We need to confirm judges,” McConnell said in a recent radio interview. His motto, he reminded, is to “leave no nominee behind.”

He said, “The pandemic will not prevent us from achieving that goal.”

McConnell's GOP majority in the Senate is divided over the coronavirus response, with many Republican senators frustrated by what they view as big spending, now approaching $3 trillion, even as Trump wants more.

Treasury Secretary Steven Mnuchin is seeking a broad package that could include infrastructure and broadband investment as part of Trump's long-running campaign promises.

For the states, Pelosi has said she wants to see as much allocated as the more than $500 billion that Congress has provided for small-business relief.

McConnell has said he's not inclined to funnel federal dollars to the states and said Monday he's focused on “commonsense” steps.

As Congress struggles to assert itself from home, Senate Democratic leader Chuck Schumer said there must be public hearings to "immediately begin vigorous and desperately needed oversight of the Trump administration’s response to the COVID-19 pandemic.”

On Monday, the administration announced Robert A. Westbrooks as executive director of the Pandemic Response Accountability Committee, the new panel tasked with overseeing the $2 trillion coronavirus relief bill passed by Congress last month.

Westbrooks, a former inspector general for the federal agency tasked with protecting benefits for workers and retirees, was named to the position by Michael Horowitz, the Justice Department inspector general and the chair of a council of government agency watchdogs.

When Trump signed the bill into law, he noted his objection to the oversight provisions.