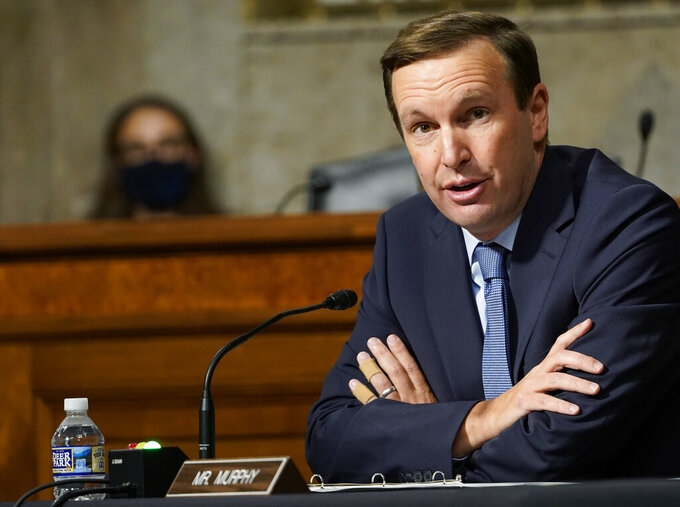 FILE- In this Sept. 24, 2020 file photo, Sen. Chris Murphy, D-Conn., speaks during a Senate Foreign Relations Committee hearing on Capitol Hill in Washington. Murphy and Connecticut Sen. Richard Blumenthal will be self-isolating after a member of Connecticut Gov. Ned Lamont's staff tested positive for COVID-19. Both tweeted on Saturday, Nov. 14, 2020, that they had not had close contact with the staffer but were taking the step out of an abundance of caution. (AP Photo/Susan Walsh, Pool, File)

Richard Blumenthal and Chris Murphy each tweeted Saturday that they had not had close contact with the staffer but were taking the step out of an abundance of caution.

Lamont’s chief spokesperson, Max Reiss, identified himself as the senior staff member who had tested positive in a release posted to Twitter on Friday. Reiss wrote he wasn’t sure how or where he had contracted the virus.

Murphy tweeted Saturday that he had “attended an event yesterday with the Governor but was not in close contact with the staff member who tested positive. Out of an abundance of caution, though, I am isolating until I get tested and consult with the Office of Attending Physician Monday morning.”

Blumenthal tweeted Saturday afternoon that he had “just returned from being tested myself and am currently self-isolating.”

In a news release Friday, Lamont's office said contact tracing had begun and all members of the administration who have been within 6 feet (2 meters) of Reiss for 15 minutes or more will self-quarantine for 14 days. In addition to Lamont, chief of staff Paul Mounds and chief operating officer Josh Geballe will self-quarantine.