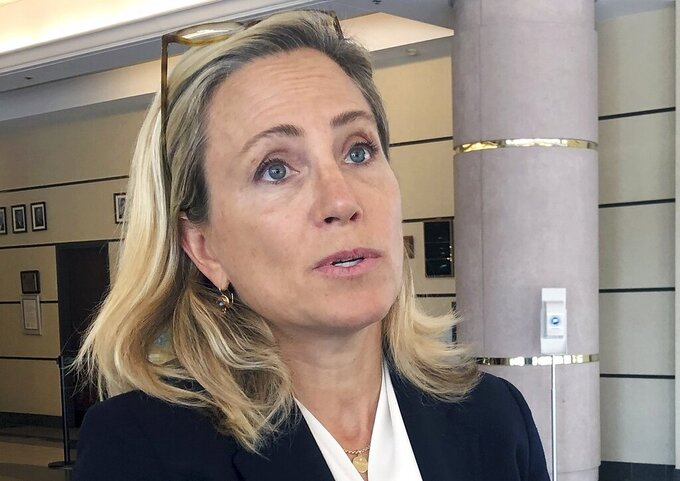 FILE - Sen. Alex Kasser, D-Greenwich, the Senate vice chairman of the General Assembly's Transportation Committee, speaks following a meeting at the Connecticut Department of Transportation offices on Friday, Sept. 20, 2019, in Newington, Conn. Connecticut state Sen. Kasser, the first Democrat elected by her Fairfield County district since 1930, announced Tuesday, June 22, 2021, she is resigning from office. She cited her high-profile and contentious divorce, saying she's no longer able to adequately do her job. (AP Photo/Susan Haigh, File)

Connecticut state Sen. Alex Kasser, the first Democrat elected by her Fairfield County district since 1930, announced Tuesday she is resigning from office. She cited her high-profile and contentious divorce, saying she's no longer able to adequately do her job.

“I just completed my third legislative session and I’ve loved my job and I’ve loved the responsibility of serving the public and moving the state forward. But I can no longer give the job the same attention it deserves because of my personal situation,” she told The Associated Press. “And as an elected official, I have a duty to my constituents and to the public to explain why I’m stepping down and to be honest about it.”

She was expected to submit her official resignation to the Secretary of the State's office.

Kasser, 54, upset a five-term Republican incumbent in 2018. It was her first competitive race and her victory signaled that Democrats were making inroads in a traditionally Republican bastion of Connecticut. She was reelected in 2020 in the district that includes Greenwich and parts of New Canaan and Stamford.

Kasser, a former corporate lawyer, was known as Alex Bergstein before legally changing her name in February 2020. She was married in 1995 to her now-estranged husband Seth Bergstein, the managing director and head of the Global Services Group at the investment bank Morgan Stanley. The couple have three adult children.

In her written statement posted online Tuesday and the interview with the AP, Kasser said her personal circumstances have created an “insurmountable obstacle" and that she plans to move from Greenwich.

“I can no longer live or work in Greenwich as it is loaded with memories of the 20 years I spent raising my children here," she said in the statement. "It is too painful to be in Greenwich now that I’ve been erased from their lives, just as their father promised would happen if I ever left him.”

In her statement she says she has been subjected to harassing court motions and other abuse. Kasser also alleged her partner Nichola Samponaro — her former campaign manager — had also been subject to harassment from Bergstein.

“She had nothing to do with ending my marriage,” Kasser wrote in the statement.

In the interview, Kasser said she could not discuss the allegations further.

Janet A. Battey, Bergstein's divorce attorney, said Kasser's “outrageous allegations and narrative couldn’t be further from the truth” and criticized her for commenting in the media about the divorce.

“Ms. Kasser sadly continues to wage a public battle in the press while simultaneously dragging out the court proceedings,” Battey said in a statement. “Throughout the marriage, Ms. Kasser described Seth as a devoted father and patient and loving husband. Seth and his three children sought to keep this matter private, but Ms. Kasser continues to make blatantly false public statements in furtherance of her own agenda.”

Battey said Bergstein “trusts the legal system and family court and that the upcoming trial will reveal Ms. Kasser’s narrative for what it is.”

Kasser first sued Bergstein for divorce three years ago. The case, which has attracted national attention in the financial media, is expected to go to trial later this year. Kasser recently hired lawyer Robert Cohen, who is also representing Melinda Gates in her divorce from Microsoft founder Bill Gates.

Nancy DiNardo, chair of the Connecticut Democratic Party, called Kasser “an asset to the people of Greenwich, the state of Connecticut and the Democratic Party,” and predicted the party will hold on to 36th Senate District seat given Kasser's "good work and that of state Democratic state leaders” during the coronavirus pandemic.

“She will be sorely missed,” DiNardo said. “My heart goes out to her as she experiences these very difficult times.”

Kasser, a deputy majority leader in the Democratic-controlled state Senate and co-chair of the General Assembly's Banking Committee, has advocated for stronger domestic violence laws.

She recently co-sponsored legislation that expands the definition of domestic violence to include non-physical violence or “coercive control,” a pattern of threatening, humiliating, or intimidating acts. She defended her support of an amendment that would make that provision effective upon passage, saying it does not affect her own divorce case. The bill is currently awaiting Democratic Gov. Ned Lamont's signature.

“Yes, I’m fighting for my own personal freedom,” she said. “But I am also fighting on behalf of all of those other women who are trapped in an abusive situation like I was.”