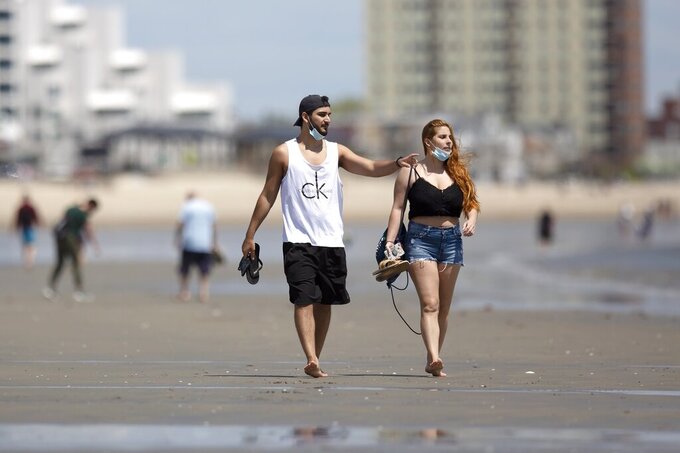 They included Sleeping Giant State Park in Hamden and Southford Falls State Park in Southbury. More than a dozen parks and beaches were closed on Saturday.

Sixty-nine more deaths associated with COVID-19 were reported through Saturday evening, bringing the state’s total to 3,408.

Connecticut now has 37,419 confirmed cases of COVID-19, after 716 new cases were reported.

Campground and restaurant owners are the latest business owners going to court to challenge the governor’s plan to reopening Maine’s economy.

The Portland Press Herald reports that the owners of Bayley’s Camping Resort in Scarborough and Little Ossipee Lake Campground in Waterboro filed a federal lawsuit Friday against Democratic Gov. Janet Mills. The plaintiffs also include the owners of the Little River Bar & Grill and the Seaside Square Café.

The group argues that its an unconstitutional restriction on the right to travel freely to require out-of-staters to quarantine for 14 days if they come to Maine. In response to a similar earlier lawsuit, Attorney General Aaron Frey has said that the executive orders and reopening plans were carefully crafted based on the governor’s authority to protect public health.

The Maine Center for Disease Control on Sunday reported an additional 39 people had tested positive for the virus. The total number of deaths stood at 70, and total cases increased to 1,687, officials said.

House Speaker Nancy Pelosi told graduating seniors at Smith College on Sunday to focus on their unique purpose and power during the coronavirus pandemic and beyond.

Pelosi, the first female speaker of the U.S. House, was part of an online commencement ceremony hosted by the private women’s college in Northampton. She said graduates would be well served by the resilience, courage and perseverance they have honed over the past four years.

“So, as you go forth, embrace the groundbreaking legacy of those who came before you,” she said. “Know your purpose. Know your power.”

As of Sunday, 86,010 people have tested positive for the coronavirus in Massachusetts, an increase of 1,077 from the previous day. The state Department of Public Health announced 92 new deaths, for a total of 5,797.

Meanwhile, the Trustees of Reservations plan to reopen five of their most popular properties around Massachusetts on Tuesday, but with restrictions in place to prevent the spread of the coronavirus.

The deCordova Sculpture Park and Museum in Lincoln, the Fruitlands Museum in Harvard, Naumkeag in Stockbridge, and World’s End in Hingham will open to area residents. Crane Beach in Ipswich will be open only to existing permit parking holders and Trustees members.

Two of the state’s most popular liquor stores are now offering curbside pickup.

New Hampshire liquor stores have remained open under the governor’s stay-at-home order, and workers have been given weekly stipends to supplement their paychecks. The New Hampshire Liquor Commission this week began a pilot program at the stores along I-95 in Hampton and the northbound side of I-93 in Hooksett for curbside and in-store pickup.

Customers can order online and schedule pickups the next day at the earliest.

As of Sunday, 3,596 people in New Hampshire had tested positive for the virus, an increase of 41 from the previous day. The state announced one new death, bringing the total to 172.

Several members of the Providence City Council are condemning the actions of college students seen flouting the governor’s orders aimed at preventing the spread of the coronavirus.

Providence College officials issued an apology after video shared on social media showed students gathering in large groups and not wearing face coverings this weekend. Spokesman Steven Maurano told WPRI-TV that the gathering was the result of a parent-organized parade for graduating seniors.

Majority Leader Jo-Ann Ryan said in a statement Sunday that she and her colleagues on the city council are preparing legislation requiring colleges and universities to provide a mitigation plan to keep off-campus students and neighbors safe.

The Roman Catholic bishop of Providence, meanwhile, is pushing back against the closure of churches during the coronavirus pandemic, saying public worship is an essential service.

“Our churches must re-open, and they will, soon. Our people are demanding it,” Bishop Thomas Tobin said on Twitter, adding that strong safety measures will be in place and that vulnerable parishioners will be instructed to stay home.

The Rhode Island Department of Health on Sunday announced 240 additional people testing positive for the virus, bringing the total to 12,674. Ten more people have died, for a total of 499.

Gov. Phil Scott thanked University of Vermont graduates Sunday for their response to the coronavirus pandemic.

“All the sacrifices you’ve made literally saved the lives of hundreds of Vermonters,” he said in a message recorded as part of a video celebration. The best measure of someone’s character is often how one responds to a challenge, he said, singling out nursing students who graduated early for specific praise.

“The grit and determination of the Class of 2020 is inspiring to us all,” he said. “It’s proven that you’re ready for whatever life will throw at you.”

The Vermont Health Department reported six more people testing positive for the coronavirus on Sunday for a total of 940 cases. One additional death was reported — the first in more than a week — for a total of 54.