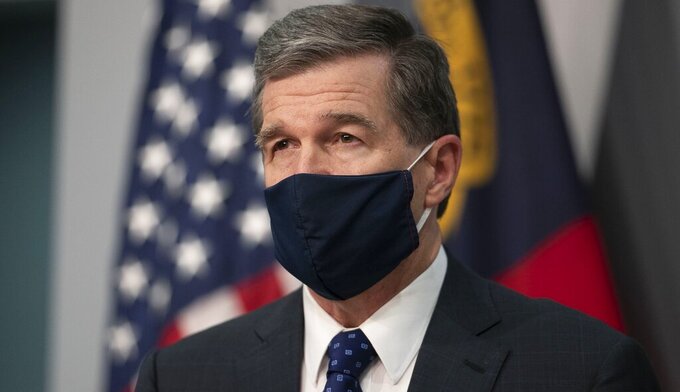 Governor Roy Cooper wears a face covering as he closes his press briefing on the COVID-19 virus at the Emergency Operations Center on Tuesday, July 28, 2020, in Raleigh, N.C. (Robert Willett/The News & Observer via AP)

Starting Friday, the eateries and other establishments offering drinks by the glass like distilleries and breweries will have to cut off sales at 11 p.m. under Cooper's latest executive order. State law usually allows sales until 2 a.m. The order doesn't apply to retailers like grocery or convenience stores that sell beer and wine on the shelves.

Some local governments, Raleigh, Mecklenburg County and Chapel Hill among them, had already approved late-night bans after seeing examples of restaurant patrons failing to wear masks or to remain apart in the wee hours. More restrictive local limits on alcohol sales can remain in effect.

At a media briefing, Cooper said the statewide directive is needed as case numbers have increased among young people, and as college students return to North Carolina schools next month. Cooper's announcement came on the same day North Carolina reported another record number of hospitalizations involving coronavirus patients, which is now approaching 1,250.

“We know that the ‘bar scene’ has been a place where we have seen increased transmission. It’s happening in other states,” Cooper said. “We want to drive those numbers down, and this is one of the ways that we believe will be effective.”

Standalone bars have remained shuttered since March under Cooper’s orders and continue to be. Restaurants have been allowed since late May to reopen their dining areas at partial capacity, but can operate their own adjoining bar areas. Cooper's order also doesn’t affect the government-run Alcoholic Beverage Control liquor stores, which already must close by 9 p.m.

States like South Carolina and Alabama moved up last-call times on alcohol this month to attempt to stem the virus’s intensity. And Virginia Gov. Ralph Northam announced on Tuesday an alcohol sales ban after 10 p.m. in the Hampton Roads region starting Friday.

More than 116,000 people in North Carolina have tested positive for the virus since the pandemic began, the state Department of Health and Human Services reported on Tuesday, with more than 1,800 deaths.

State Health and Human Services Secretary Mandy Cohen said Tuesday that case trends appear to be stabilizing, but more time is needed to review the data. While hospitalizations and case numbers remain high, she said, state hospitals still have adequate bed capacity. And the trajectory of the percentage of tests returning positive is falling, but it's still too high.

"Our actions to slow the spread of this virus are having an impact,” Cohen said, pointing in part to a statewide face covering requirement in public places that began a month ago.

The overall number of completed tests in North Carolina has exceeded 1.6 million, but health officials say the pace of their completion has been slowed due to nationwide supply shortages.

Cooper confirmed on Tuesday that he would let expire Wednesday one COVID-19 order provision that prevented utilities from disconnecting services of customers unable to pay their bills or charging them late fees or penalties.

He said that he would unveil a plan that would use federal coronavirus relief money for direct payments to utility companies and to landlords so that customers can avoid disconnections or evictions. Local governments need utility revenues to cover operating expenses and debt service on their plants.

Services covering about 1.4 million residential customer accounts had become eligible for disconnection as of June 30, according to the latest data collected by the North Carolina Utilities Commission. There were $258 million in unpaid bills for all types of customers as of that date, the commission said. Cooper’s expiring order still directed utilities to come up with bill repayment plans that last for at least six months.